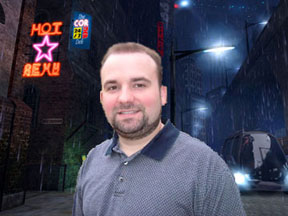 Those of you tuning in to find Chella's column this week are probably disappointed to find my smiling mug instead. Chella is off this week traveling and when she gets back she will be preparing for her big move out of central London to the peacefulness and clean air out in the English countryside. No word on if she is getting a basset hound and taking up fox hunting yet. So I am covering for her and just happen to have some interesting game experiences to write about that happened over the holidays.

Over the lazy days of the last couple holiday weeks, I actually had some time to sit back and play some games. And I mean really play them, not the normal "ok, let's look at this title critically" way I normally do. And I found out something interesting. There are lots of ways that developers can help their players suspend disbelief when playing their games. I found two of them, though one cost me quite a lot of money.

Let's start with my experience playing Splinter Cell Double Agent on the PC. Those of you who have wrestled with this title probably know what I am talking about. I had been told that the gameplay is a lot like one of my favorite series – Hitman – only you are a good guy here. And with Double Agent, you are posing as a very bad guy, so it should be even more similar. I bravely volunteered to review the game myself, looking forward to some stealth action goodness. My review should be seen next week sometime.

Ok, so I popped Double Agent into my gaming rig and did a double take that it was going to take up 10G of space. But I figured it was worth it and let the game install, though it took a long time. Then it was time to play.

A trip to the local Best Buy did not lighten my dark mood. Besides my wife almost getting pick pocketed (a whole other story I had to deal with in a not so peaceful way) I found out that a PCI express card with Shader Model 3 was going to cost me $299. But it was the last one the store had so I bit the bullet and picked up a new ATI Radeon X1950 Pro, apparently the top of the line card and certainly the most expensive in the store.

Grumbling on the way home, I remembered a column Todd had written years ago about why he liked gaming on the console better than the PC, because you knew picking up a console game that it would run on your system. But I never abandoned PC gaming, though at times like this, my conviction wavered.

At least the new card easily went into the slot where the old one sat, and used the same power cord as well. The install followed by the driver update was quick and painless.

Then it was off to the world of Splinter Cell Double Agent, after I reinstalled the game. I was so angry before that I deleted it.

My anger ceased about ten minutes into the game. Wow. I played the first several levels with my mouth open. I play a lot of computer games, but I never thought they could look this good. The characters look amazing, even when you get the camera right in their faces. They even have little reactions and subtle facial motions, just like real people.

Of course the environments are amazing as well. There is one level that I will talk about in my review next week that will knock your socks off. You are in Shanghai at the top of one of the world's tallest buildings. It's raining and it happens to be the Chinese New Year.

So there you are, dangling on a black nylon rope, your image reflected slightly on the glass. The rain is beating down and bouncing off different surfaces and all around you and the city at night spreads out in all directions, complete with all the landmarks and glowing signs that make Shanghai special. Then you will notice a little bit of red or blue brightening on your face, and when you look around, you see fireworks exploding nearby. How well you can be seen by people inside the building actually depends on the fireworks display outside illuminating you at that moment. So you have to wait for a break to drop by windows with people.

Anyway, it's just totally amazing (the fireworks I think are just the developers showing off a bit considering how great everything else looks) and it's by far the best looking level of any computer game I have ever experienced. And to some degree, the entire game is like that. I know why I needed the new graphics card. Between the rain, fireworks, moving cars in the city below, the various lighting effects interacting with one another and the movements of both your character and the people inside the building, it would have smoked my old card.

So poorer but happier, I find that excessive eye candy can draw you into a game.

A much cheaper alternative for turning reality off came to me because my wife gave me a copy of Sid Meier's Pirates for Christmas. Now Pirates is a rather old game (even the remake has been out over a year) so the system requirements are rather low. It even ran fine on my laptop, which is far from top of the line.

And I found myself enjoying the cartoon-like graphics and swashbuckling out on the Spanish Main for hours on end.

Now the graphics in Pirates are nothing special, though they are quite nice. You would not exactly confuse them for reality though. Anyway, what got me involved with the game was the rich storyline and non-linear gameplay. I just kept thinking "one more ship raid" or "one more dance with a governor's daughter" before bed. Pretty soon it was nearly morning in reality and I had not yet gotten that one more whatever.

So there you have it. Yes, you can make amazing graphical feats for your games and even if it costs hundreds of dollars to play, my guess is that a lot of gamers will follow. Or you can design a tight game that appeals to a lot of people with a good plot and solid gameplay, and people will flock to you as well.

Which method is better? It's hard to say. Some people won't pay to play a high-end game like Double Agent (though the new card makes all my other games run better and even look a bit better – Oblivion got a nice facelift). And some people can't afford it either, so publisher Ubisoft is losing a good part of the market right there. But making a solid game like Pirates is not an easy task either. If it was, Sid Meier would not be the God of the industry that he is.

Depending on your tastes and budget however, there is a game out there for you. The industry keeps innovating and we players continue to be entertained. More than movies, more than television and sometimes more than reality, computer games offer us some great interactive experiences that are not soon forgotten. Just don't forget to sleep and eat, at least occasionally.

Most Looking Forward To: Rainbow Six Vegas (now that I have the hardware to run it!)