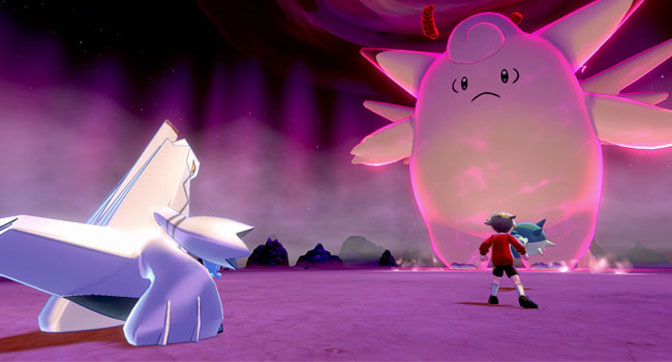 As I was finishing up Pokémon Shield, I was disappointed that I completed the main story and post credit story in 36 hours. This caused a few small realizations. The first was how sad I was that this was really short for a Pokémon game. While thirty-six hours seems like a hefty enough time, I spent six to ten hours messing around doing raids with my wife. That means I could have beat the game in about a day if I avoided screwing around and leaving my game on while I cooked dinner.

Much like my cooking, the amount of playtime didn’t sit well with me. Then, to compound this, I see banner after banner pitching the $30 to $40 DLC coming out for the game. That annoyed me as I spent $60 on this game and expected it to last longer than a season of House. Instead, they gave a shorter game that replaced solid game hours with other features and added DLC to balance out the title. For those who don’t know me well, I grew up very poor and my game buying value habits have stayed with me. This has led me to bristle at this growing trend of selling shorter games at full price and then adding DLC to complete it.

For me it was Pokémon that highlights the most egregious example it in recent memory. According to the site gamelengths.com, most Pokémon games are registering between 60 and 110 hours of gameplay to complete. Sword and Shield being shortened is also frustrating because the game does everything right, but feels artificially compressed. When I have talked about this with a few people they have said it was likely to make room for the raid feature and multiplayer. For anyone who has never played Pokémon, it is never a multiplayer focused game. You could always trade and battle with other people, but the campaign has always been a solo operation. Sword and Shield are no different in that aspect

So, Nintendo is telling me that in order to get the normal amount of play hours I would normally get, I have to spend an additional 50% of what I paid for the game. Pokémon is far from the only recent example of this. Fire Emblem Warriors had a shortage of levels and characters from different Fire Emblem games. If you want more characters and items, including giving ultimate items to characters that are default to the game, a $20 season pass needs bought. And even then, a few of the new DLC characters have the same moves as other default characters. The bonus stuff did not bother me, but the ultimate items for default characters did.

I’m by no means an old timer, but I remember paying $50 to $60 for a game and everything was inside. Before anyone accuses me of being nostalgia blind, I remember the bugs in almost every 3DO game, and Konami releasing another version of Castlevania 64 and selling that for full price. But I could buy Metroid Prime or any F.E.A.R. game and not have to buy DLC to make the game longer or more playable. This is not a good concept and unfortunately the game companies are getting us used to it. By shortening games and forcing us to pay for more game time or the “rest of the game,” they are finding ways to milk more money out of us.

Personally, it makes me sick because I want to buy a game and enjoy it for a few weeks or even a couple months. However, now I have to wonder if I have to buy fewer games to be able to buy the DLC to enjoy the full extent of each title. What concerns me is that these are being pushed for almost every game franchise that has enough dedicated fans that will pay for extra material. I hope that we can eventually move away from this practice but, let’s all be honest here, as long as they are making a lot of money from it, it’s not going to stop.

Waiting For: Gods and Monsters

One thought on “Getting Poked By Pokemon Purchases”