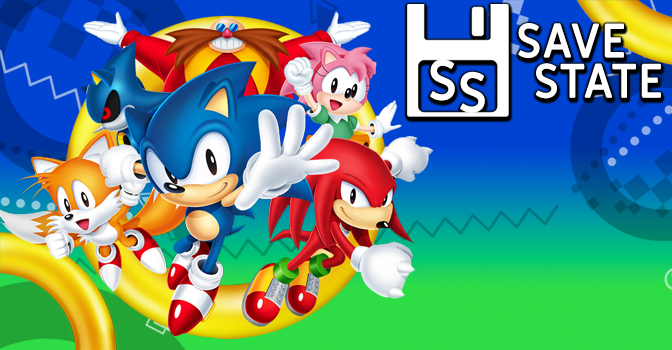 Welcome to Save State, where I’m as much of a Sonic fan as you can be without being a furry. I am a massive Sonic fan. Not to the extent of coming up with my own “original character, do not steal,” but enough that I’ve gone out of my way to play every single localized Sonic the Hedgehog game in the series long, long history. Sonic was the greatest icon of my childhood in a time where all the coolest heroes were blue, from Mega Man, to Sonic, to Cortana, to Nightcrawler, and even Bob from ReBoot. The 90s and early 00s were a fantastic time for blue characters in media, and I loved them all. The SatAM cartoon, a strange OVA featuring Knuckles in a hat, the 90s was a phenomenal place for Sonic the Hedgehog- and Sonic Origins is a callback to that time when the character was on top of the world. 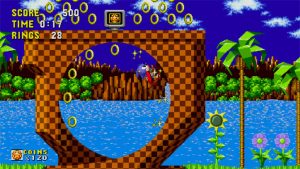 In the package of Sonic Origins you have four games: Sonic 1, CD, 2, and 3 and Knuckles. For the uninitiated, these are all fast-moving 2D platformers with a strong emphasis on momentum and learning the environments. As Sonic, Tails, and Knuckles, players will run, fly, and glide their way through a ton of imaginative stages filled with enemy robots and traps to overcome. These are less games based on speed, and they do a lot more to reward game knowledge and skill by maintaining player momentum, which can appeal to the part of the brain that lights up for a dog when they stick their head out of a moving car’s window. Going fast appeals to my lizard brain, and Origins was a great excuse to break into some 2D Sonic platforming skills to clear Green Hill Zone in under a minute.

Fans of the franchise may remember that 1, CD, and 2 each got iOS and Android ports, which were extremely competent and offered new unlockables like Tails in Sonic 1 and CD. Origins takes the Christian Whitehead Android/iOS ports and places them on modern day consoles for the first time with all of the updates and features they brought, plus the addition of the drop dash mechanic from Sonic Mania. Much like Redeads from The Legend of Zelda: Ocarina of Time, the drowning music from Sonic the Hedgehog taught an entire generation what anxiety is. With Sonic Origins, a whole new generation can learn what that’s like!

The first game in the collection, Sonic the Hedgehog, is the game that started it all. Sonic 1 was a fierce competitor to Mario’s platforming, incorporating loop de loops and momentum-based platforming to differentiate itself from the dense crowd of 2D platformers of the early 90s. The visual spectacle of going through a loop and picking up speed is likely nothing special nowadays, but in 1991, that sold the Sega Genesis. 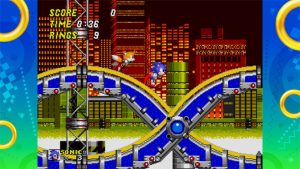 Sonic CD is the oddball of the earliest 2D Sonic games. Rather than simply requiring the player to reach the end of the stage, the game introduces a time travel mechanic that changes the environment should you hit an appropriate sign and then reach enough speed. Levels are substantially more sprawling in CD, tasking players to search high and low throughout time for Robotnik’s devices or simply completing all of the Special Stages to acquire all Time Stones to get the good ending. For a game without Chaos Emeralds, Sonic CD is certainly the odd duck, but those who can appreciate more adventurous level design could find something to love, here.

I, unfortunately, fall on the side that finds the stages clumsily designed with haphazard trap placement, though I do believe CD has some extremely fun special stages. Sonic CD was the first game in the series to use an animated opening, and Origins keeps the original in all its glory, and the soundtracks for this game are just as ambitious as the time-hopping level design. Strangely, though, Knuckles is absent from CD- possibly because they would have needed to design a model for him to use during Special Stages, something I strongly wish Sega would have gone the extra mile to incorporate given the vertical nature of CD’s level design. 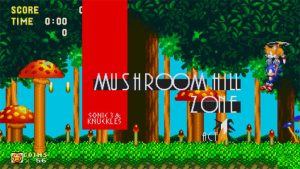 Sonic 2 is the fan favorite Sonic game of many a millennial, featuring strong level design with a solid difficulty curve, a new companion sidekick in Miles “Tails” Prower, the first introduction of Super Sonic, as well as a straight up egg-themed Death Star. Hidden Palace Zone, a lost stage that was referenced in the Genesis Sonic 2’s level select, was actually finished and placed into the mobile version of Sonic 2, so it exists in Origins as well. There’s not a ton to say about Sonic 2 other than the fact that it’s some of the finest platforming that ever existed on the Genesis, and while it’s not my personal favorite Sonic game, it’s up there for many people.

Sonic 3 and Knuckles is the game that was largely absent from the Retro Engine iOS and Android ports of the earliest Sonic games, so seeing it present on modern day consoles with widescreen support is absolutely incredible. Featuring the longest adventure of Sonic the Hedgehog up to that point, Sonic 3 and Knuckles has a whopping 14 zones, more than any previous Sonic game. With 14 emeralds to collect, a wide variety of Special Stages, with Blue Sphere being the best emerald acquiring Special Stage of all time.

Each game in Sonic Origins has a couple of brilliantly drawn cutscenes that show a ton of character for Sonic and pals, one generally starting at the beginning and end of each game you clear. Seeing Sonic rescue Tails from bullies, watching Amy play with her tarot cards, there’s a lot of fun to be had, and the cutscenes look even better than what we got in Sonic Mania five years ago. There’s even a brief mission mode, as well as a mirror mode that horizontally flips the stages to challenge your muscle memory. 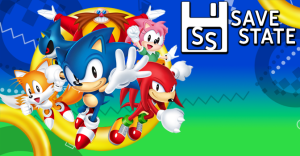 The main methods to play Origins are through Anniversary and Classic mode, but I found there to be very little difference between the two. Anniversary mode exchanges your lives for coins, and you can spend them to do things such as retry Special Stages should you fail them. You also get to play all four games in widescreen and have access to the drop dash from Sonic Mania, which is quite fun but can actually break the games. The drop dash can exploit the level design of CD to let you time travel nearly on a whim, but also the mechanic doesn’t work super great with the roll-locking that Sonic Origins does on the first three games of the collection. It’s weird.

Classic mode, then, would be the version you’d expect for those who want the original experience, but Classic is just the same thing as Anniversary, but in 4:3 instead of widescreen and with no access to the drop dash. Any bug with the games that’s present in Anniversary mode will 100% be present in Classic mode too, because these are the same versions except they’re presented in a 4:3 aspect ratio. It would have been nice if Classic mode just booted the original Genesis ROMs in a Sonic Origins wrapper, and it seems strange that such an opportunity was missed to give an accurate classic experience. 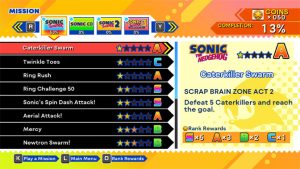 You can spend coins you collect to unlock things in the Museum section, which can show you old promotional artwork, unlock tracks from other Sonic games, and more. A lot of these are cute little baubles, with a lot of them being present in the Sonic Mega Collection from 2002, or perhaps from the Sonic and Knuckles Collection discs on CD-ROM (yes, boys and girls, I used to play Sonic on a Windows 98 desktop computer: Millennial life). It was actually because of the Sonic and Knuckles Collection that I even heard some of the prototype music from Sonic 3, because as a child I didn’t understand copyrights or licensing, so hearing a vastly inferior version of Ice Cap Zone’s music was pretty jarring back then.

Sonic 3 and Knuckles has a lot of muffled audio, and also had some of its music replaced with prototype tracks- likely due to some licensing error I’m not going to get into, here. The invincibility track was changed, which is understandable since the original was pretty repetitive, but the new track more closely resembles Sonic 4: Episode 1 than it does anything else in Sonic 3 and Knuckles soundtrack. There’s also input delay, specifically on PC, which makes the game feel much less responsive than the Sonic Mega Collection from 20 years ago on the GameCube.

The games within Sonic Origins were all rebuilt, from the ground up, using Retro Engine. So, of course, they’re not going to be 100% exact. This does introduce new bugs and problems because you have issues where loops become walls due to layering problems, or Tails’ AI is bugged so he gets stuck off-screen and you hear his jump sound effect ad infinitum, annoyingly. This doesn’t happen with every level, but it’s strange that these kinds of problems weren’t bug tested into oblivion when they’re so easily reproducible. This likely hints to there being little QA time before Origins needed to be released, as other issues like tracks being labeled incorrectly in the sound test would suggest. 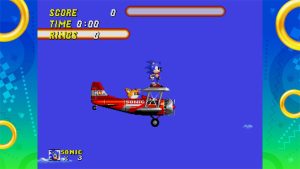 That being said, if these don’t sound like issues that would keep you from enjoying the game, then Origins might be just the jumping in point for you with Sonic if you have never played these before. The iOS/Android versions of Sonic 1, CD, and 2 have a bunch of features not available in the original versions of the games, which can provide a lot more replayability as well. The version of Sonic 3 and Knuckles in Origins isn’t perfect, given its muffled music and replaced tracks that sound as if they came out of Sonic 4 instead of a Genesis, but it’s more than passable for a casual player to enjoy. If you’ve ever wanted to legally play Sonic 3 and Knuckles on the toilet (Switch and Steam Link app to the rescue), then this is the version for you.

So, all things being equal, Sonic Origins is certainly a fine little collection of games that falls just short of being the definitive editions that everyone hoped they would be. Though, contrarily, the largest issue I have with Origins doesn’t lie in the bugs or glitches, but in the price- I spent $39.99 on imperfect Sonic 2D ports back in 2002 in the Sonic Mega Collection, but at least that collection came with seven more games than Origins has in 2022. Origins comes so close in providing a wide variety of ways people would like to play, such as Tails or Knuckles in Sonic 1, but misses the mark with things that could have been fixed during the QA process. Which, in a way, sounds right on brand for Sonic the Hedgehog.

All that being said, that should bring this edition of Save State to a close. Now, if you’ll excuse me, I’m going to go play Sonic Adventure DX for a little while and wonder why Sonic gets sucked through a wall and into the water in the very first stage. Until next time!