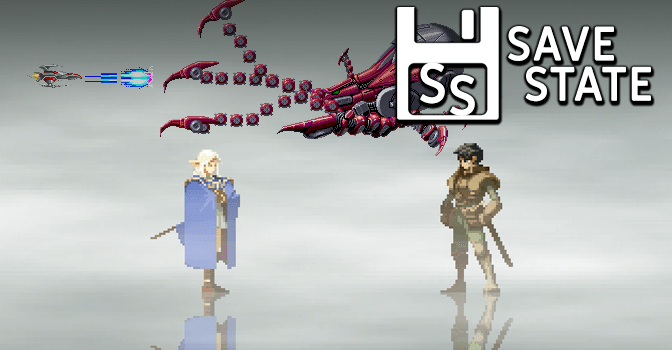 Welcome to Save State, where you might have thought we were done with Metroidvanias, but I needed to play something more challenging to take the edge off Pokemon Brilliant Diamond for the last two weeks. While going through the ever-growing mass that is my Steam backlog, I discovered a game that looked extremely neat, but I was busy reviewing and playing a large number of other games at the time. Record of Lodoss War – Deedlit in Wonder Labyrinth is a pixel graphics Metroidvania that, at first glance, is outrageously similar in appearance to Castlevania: Symphony of the Night, but after playing it extensively, I can safely say that this game starts with Symphony as a base, and builds upon it in incredible ways. 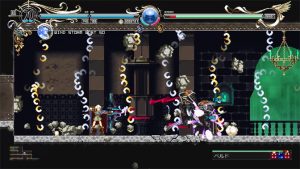 Starting things off with the story, which for much of the game consists of a character teleporting in, saying something cryptic, and then either selling you stuff or vanishing the same way they came in. A lot of the information conveyed to players in this game is referential, and as someone who never read or watched Record of Lodoss War, many of the references were lost on me, but this is by no means a story-heavy game. Most “cutscenes” are only three or four dialogue boxes, and what’s more interesting is trying to find out why the heroine Deedlit awoke into this mysterious labyrinth to begin with, her feelings for Parn are second (if not third) to the mystery of the Wonder Labyrinth, itself. Apparently, this story is a bridge into the Record of Lodoss War: Diadem of the Covenant manga, just in case there are any fans of Lodoss War out there.

One of the first things players will notice while controlling Deedlit is that the controls are tight and responsive, and an afterimage follows her just like what followed Alucard in Symphony of the Night. The visuals are bright and recognizable, and there’s a great amount of weapon variety for Deedlit to wield, everything from rapiers to greatswords and axes are available. Deedlit also has access to powerful spells that you can acquire by doing small amounts of exploration or backtracking, and as you progress through the labyrinth, you’ll gain new abilities like a double jump, high jump, and more. 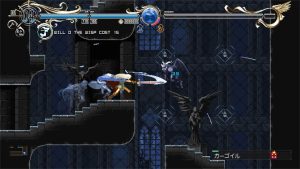 Early on you will find a bow that you can fire, which admitting did take some time to get used to as holding the bow button makes you enter an aiming stance where up and down let you adjust your aim, but you can still freely strafe with left and right. Once you get down the controls, you’ll be easily cutting your way through the varieties of enemies that lurk in the labyrinth. Using the bow or any of your magic spells will consume your MP meter, which you can regain by hitting enemies with your weapon or draining elemental attacks of your enemies using the appropriate spirit.

One of the earliest upgrades Deedlit gets is access to two powerful spirits- one of wind, and another spirit of fire. The wind spirit gives Deedlit the ability to hover in the air, and the fire one can let you venture unfazed through lava. This elemental attunement mechanic forms an intense gameplay loop reminiscent of the shmup Ikaruga, where enemies will shoot walls of bullets of wind or fire and the only defense is to absorb them by quickly switching spirits while also avoiding the boss tackling you with a physical attack. 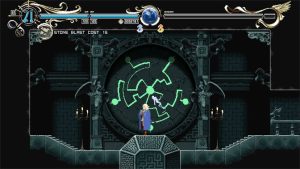 Switching your elemental attunement is integral for much of the game, as enemies have their own elemental resistances, and if you’re hit by a wind attack while wind-attuned, you’ll absorb that attack as MP instead of taking damage. One particular boss in stage 2 uses this mechanic very well, forcing you to rapidly switch your attuned element as the boss attacks you with alternating wind and fire damage. Thankfully, Record of Lodoss War- Deedlit in Wonder Labyrinth isn’t a super difficult game, but should you have some trouble progressing you can always take a moment and try to level up by killing enemies, though it shouldn’t really be necessary to do so.

Early segments aren’t too difficult to manage, as the boss might send out bursts of fire from beneath you that you can easily sidestep while absorbing the tornadoes that travel along the ground, but later scenes might be more akin to a bullet hell where the screen is just filled with colored bullets that you’ll need to jump, stab, and switch spirits repeatedly just to get through that phase of the boss fight. The labyrinth itself is broken up into stages so progression is a bit more linear than some other Metroidvanias. There’s usually a couple bosses and a progression ability in each stage, with new upgrades, spells, and weapons laying in other passages you can explore, as well, and after finding some specific abilities you can always backtrack to find items you missed. 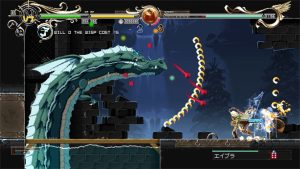 It is worth noting, however, that if you have photosensitivity issues or have light epilepsy that you control with medication, there are scenes toward the end of the game that were actually hard on my eyes, as someone who is not photosensitive. I just felt it important to lay that warning out there. Another drawback that should be considered is that Record of Lodoss War- Deedlit in Wonder Labyrinth is pretty short, around 5 or 6 hours, which makes sense considering it was purchased on sale for less than $10 (alongside Touhou Luna Nights, which I also intend to play through at some point. Oh, the backlog beckons).

So, mostly what you have here is a solid Metroidvania inspired by Symphony of the Night, except it’s broken up into stages, is pretty short and sweet, and has a number of different mechanics that make the game feel fresh, like powerful magic spells, a magical bow, and Ikaruga-inspired element mechanic that makes some boss fights extremely fun. Deedlit in Wonder Labyrinth is one of those games that, even if you’re unfamiliar with the main property, if you’re even mildly interested in an extremely good Metroidvania then this is an easy recommendation. 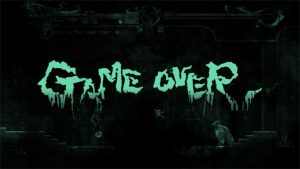 That being said, Deedlit in Wonder Labyrinth had a mechanic inspired by a shmup, but what about an actual shmup? I got the urge to put some action in my life, so I wound up playing a shoot em up collection called Darius Cozmic Collection Arcade, which wound up scratching that itch pretty well. The Darius Cozmic Collection has four games in it, most with multiple versions for a slightly different experience. In the collection you can play Darius, Darius II, Sagaia, and Darius Gaiden.

Back around the Wii era, I went through a huge shoot em up phase, playing everything from Castle of Shikigami to Lords of Thunder, and even Darius Twin on the SNES Virtual Console. While I’m much more familiar with other Taito games, like Lufia and the Fortress of Doom, it’s not like I’m entirely unfamiliar with the Darius franchise, but this collection was probably my largest exposure to the series thus far, and I enjoyed my time with it greatly.

My favorite game of the bunch is easily Darius Gaiden, which specifically was designed for single screens and has some levels that I could only describe as, “Acid trip given video game form.” Gaiden balanced the power up system a bit by making it so your main gun’s power reduces if you die, but your ship’s missiles and shields (called arm, in game) stay the same. Destroying enemies will drop various medals, which can power up your main gun, give you a stronger shield that can take more hits (which, at the highest level it protects against colliding with terrain, which is pretty huge as that’s an instant-death otherwise), and even power up the bombs that you shoot alongside your main weapon. 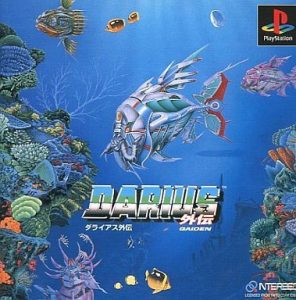 At the start of any Darius game, you’ll start off firing a single bullet that takes quite a lot of effort to take down numerous enemy ships. By the end of a run, with practice, you’ll be firing bombs all over screen that home in, and fire numerous powerful shockwaves that pierce through enemies and obstacles. There’s a massive difference in when you start playing a shmup like these, and where you end up even after just a few runs. Having even nebulous foreknowledge of when an enemy might spawn and dart for your backside is absolutely huge, after all.

The bosses in Darius are always a trip and are especially challenging. While playing Darius 2, you might come across a giant sea turtle or octopus boss, while in Darius Gaiden you’ll encounter a giant sunfish that launches mini-me drones that try to crash into you. Normally, battling against these creatures would cost a great number of quarters, but thankfully there’s a practice mode that lets you repeat specific stages so you can have a full idea of what’s approaching on specific paths.

Darius games have a wide variety of levels despite their short run time- it might only take you 30 minutes to start from zone A and reach one of the end goals, but at the end of each stage you can pick which stage you’ll go to next which means you’ll only play 7 of a Darius game’s 28 stages, so these are definitely games that have replayability in spades. Gaiden, in particular, has a huge number of trippy stages rife with challenge, so playing until the final stages multiple times will make you very, very good at the opening levels as the game branches out more as you get to the end. 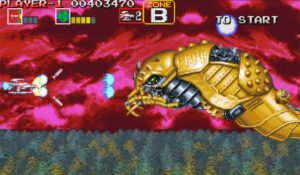 Apparently, Darius Cozmic Collection has a number of features I was not able to properly test given my PC setup, like multi-screen support where it displays the action across different displays. Unfortunately, while my PC does have three separate screens to display the action, my entire setup is for me to work from home since the start of 2020 so my displays are across an L-shaped desk, including a Huion display for illustration and graphics work, which isn’t exactly conducive to trying out this multi-screen feature.

The Darius Cozmic Collection features a few new versions of a couple of the games as well- Darius, in particular, has a version that specifically makes the game a bit easier, while another attempts to give the player a more solidified difficulty curve, with stages easier at the beginning but more challenging at the end. There’s also a good bit of information that the game can display along the edges of the screen that can show you enemy health and other data that may be useful. All in all, it’s a great little collection for shmup fans, and one I could definitely recommend if you enjoy horizontal shoot ‘em up classics.

That being said, I think I’ll draw the curtains on this entry of Save State. Join us again in a couple weeks, where I’ll try to shine a light on random games you may, or may not, have heard of in the past. Take care, and until next time!