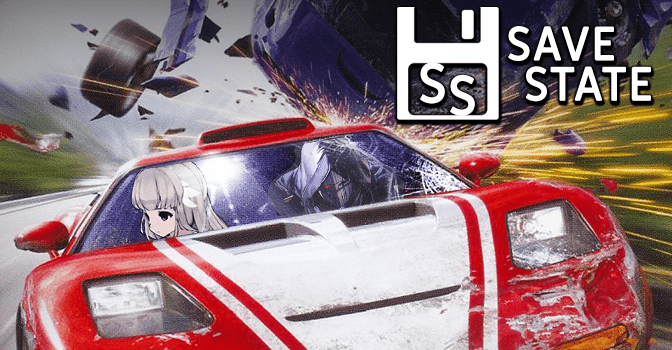 Welcome to Save State, where it’s new year, same me. The best part about a year ending is that winter sales for video games are on practically every site and service, which means it’s an excellent chance to further pad out your backlog. Why play the games you’ve been intending to play for six years when you could add even more to the pile? In related news, I found Burnout Paradise Remastered for the Switch for less than $10, and I had to give that game a go, again. Years ago, I had picked up that game and enjoyed its attempt at an open world with arcade-style racing events, but I never really got that far in it- could I, in 2021, finally beat Burnout Paradise? The answer is yes, kind of. 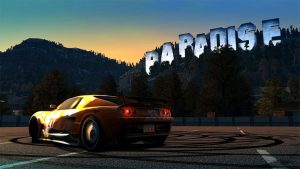 The main draw of Burnout Paradise, when it initially released, was that you’d pick a car and take your time clearing event after event across a decently sized map. Open world and racing game weren’t exactly common things that rolled off of everyone’s tongues, at least not back in 2008 when it released.  You begin Burnout Paradise with a junker car found at the scrap heap, and you’re given a provisional license at the start. You can progressively increase the rank of your license by winning various events dotting the map at traffic intersections.

Your driver’s license is the major progression system of the game, as you’re initially told to win just two events and you can choose from any of the 120 events Burnout Paradise offers. Later licenses will require you win more and more events, but the real draw is that you can choose to do them in any order you want, and the variety of events offered should allow you to change up how you play pretty regularly. If you want to do three Road Rage events and four Races to reach the next rank on your license, you’re free to do just that. Burnout Paradise is kind of like Mega Man’s boss select screen, but the selection screen is traversable and everyone is a car. 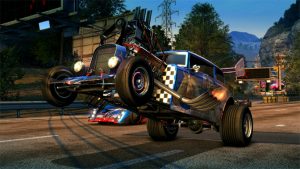 Every so many events you clear will unlock new cars that will drive around Paradise City, and crashing them will get them delivered to the junkyard for you to use, yourself. Of course, the cars get progressively better as you go along (unless you use the DLC cars that come with the Remaster. Yeah, yet another instance of a Remaster breaking the usual progression of a game), which will make you want to find and crash those cars any time you see them speeding around the city. While there are around 150 cards in Burnout Paradise Remastered, not all of them will jive with every player for every event as there are also three different types of boost in the game: Speed, Aggression, and Stunt. Different events might cause you to switch up your car, because there’s not much point in taking an Aggression car into a stunt time trial event.

For the events, Races are exactly the type of event you’d expect them to be- get to the finish line the fastest. Crashes will set you back, but taking down other cars will earn you valuable boost that you can use to cruise ahead of the competition. Marked Man events require the player to reach a specific destination of the map without getting wrecked by other racers, and they become more aggressive in taking you down the more of these missions you clear. Road Rage events task you with taking down a specific number of other cars, and are my personal favorite events in the game. The Stunt Run event will make the player to chain stunts together to earn lots of points in a limited time, and while this event can be quite fun if you play it straight, it’s also easily exploited. 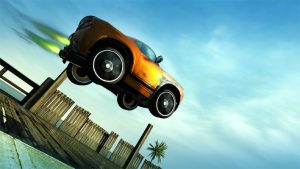 There’s also Burning Routes for each car in the game, Burning and Midnight Rides for the bikes, Road Rules which are effectively single-road time trial events, and an online Cops and Robbers mode, as well. The Remaster also comes with the Big Surf Island DLC among everything else, which will give the player a new environment to mess around in, with even more cars to unlock.

The soundtrack is a time capsule of 2008, with varieties of punk rock, Avril Lavigne, and of course, the titular song by Guns n’ Roses, Paradise City. Burnout Paradise is one of those chill games you can just sit, relax, drive around, and clear events when you have a few minutes to play each day. While I’m not exactly very big on racing games, Burnout Paradise is the video game equivalent of comfort food, so while I never got very far into it when I found it on sale years ago, I had a great time messing around in its remaster because it’s just pure, simple fun. 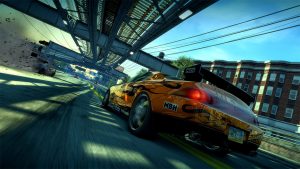 So, Burnout Paradise Remastered was the comfort food, then what was the spicy food that made me feel as if I needed to retreat to something calm and soothing? Well, the answer to that is Ender Lilies: Quietus of the Knights. Of course, it’s yet another Metroidvania (which, leave a comment if you’re tired of hearing about Metroidvanias), but the challenge rating for Ender Lilies is substantially higher than that of Burnout Paradise.

In Ender Lilies, a young priestess named Lily is awakened by the spirit of an umbral knight, and has to begin her journey through the kingdom of Land’s End. At an unspecified point in the past, an awful blight began to rain upon the land, turning its inhabitants into the cursed Blighted. Immortal and unyielding, the Blighted are no longer human, and worse yet, they seem to come back to life any time a priestess rests at a Respite (though this mechanic is likely to mimic the Souls series, as enemies repopulate in those games should you rest at a bonfire). Being a 2D Metroidvania, you’ll defeat enemies, navigate rough terrain, solve puzzles, and collect items, all while encountering challenging boss fights. Lily doesn’t engage in combat directly- instead, she summons spirits who attack foes in her place. The Umbral Knight, for example, appears in front of her and can do a quick three hit slash attack. After purifying the souls of mini-boss and boss Blighted, their spirits can join your ranks, giving you the ability to attack enemies with giant hammers, spears, or summoning a bird familiar that will target enemies alongside you. You can equip two sets of three spirits at a time, so you can switch between them as situations demand, and you can even upgrade your spirits and equip relics while at a Respite. Most spirits also have a usage limit before you need to hit a Respite and respawn the enemies, and Lily’s prayers, which are your only method to heal in between these checkpoints, recover at the same places.

The largest draw of Ender Lilies are the challenging boss fights. Lily’s movement actions are pretty limited- especially when the game first begins, as you can jump, attack, and have a simple dive that you can use to dodge attacks, but most of Lily’s actions have a very deliberate amount of end lag to them. The narrow movement options means that your primary method of avoiding death is going to be learning what you can, and can’t, get away with during boss fights. When you reach 1/3rd of a boss’s health bar and they use a new attack that’s insanely fast to take 60% of your maximum health, it’s okay to accept that you might die a time or two while learning a boss. Thankfully, the boss fights both reward your knowledge and skill, so it never feels like bashing your head against a brick wall. Ender Lilies has an aesthetic that I can only call Vanillaware-lite, or perhaps if Vanillaware made a Flash game. The visuals are gorgeous, with most enemies having well defined attack cycles that the player can easily identify, effectively killing two birds with one stone. The atmosphere is commonly forboding, as it really feels like a post apocalyptic world, under the effects of a neverending rain of plague. Honestly, if there’s any game that shows how the last couples years have felt, it’s Ender Lilies.

If there’s any negative to Ender Lilies, it’s that the map design is pretty mediocre, which is a shame since that’s one of the backtracker’s biggest tools for exploring the world. The size of rooms on the map share very little relation to how large the rooms actually are to traverse, which can make it very difficult to remember where there were passages that you couldn’t quite reach or break open yet. Ender Lilies does, in fact, tell you which rooms have been fully explored vs those you have not, but that’s not explicitly useful when 4 in 5 rooms will be not fully explored because you’re missing a jump, slam, etc., power up. Compared to other Metroidvanias like Castlevania: Symphony of the Night, or newer games like Timesplitter, the map in Ender Lilies is simply a sizable step backwards for very little reason. To compensate for the poor map, though, whenever I unlocked a new traversal power or something I could use to open red floors or doors in areas I had already been, finding them against was as simple as finding a map online. Some might call that poor design, others might call it cheating, but I’m simply not going to waste a ton of my time completely re-scouring every room I’ve already been through to find a pustulant floor or door. Outside of the map, the exploration is actually really great in Ender Lilies, and there are goodies strewn about the world that can aid you in your next combat encounter.

While making your way through the bleak and dilapidated world of Ender Lilies, you can find items to raise your maximum health, increase how much health your prayers restore, or even find new spirits with which to attack your foes. Mini-bosses are fairly common, some are challenging, but all of them are always welcome because that means you’ll have new attacks at your disposal. That being said, Ender Lilies was around $18 during the winter sales, and I had an amazing time with it. It’s one of the more challenging Metroidvanias out there, though it’s a far cry from being as rough as La Mulana or Rabi-Ribi. Which, if those sounded like gibberish to you and you enjoyed Ender Lilies, those tough as nails Metroidvania lovers may definitely enjoy those two games, as well!

That being said, we’re going to bring the first Save State of the new year to a close. Maybe for 2022, we can all work toward a collectively better year than these last couple have been. It costs nothing to be a decent person to those around you. Take care of each other, cherish your loved ones, and Happy New Year, everybody.