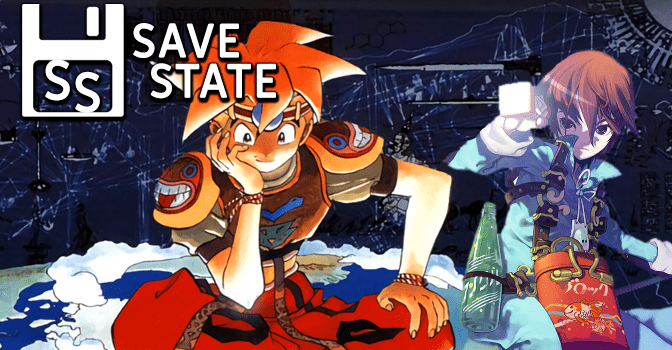 Welcome to Save State, where the dreams may be fragile, but we never say farewell to the ruins of the moon. Sorry, over the last couple weeks it appears that, for however brief of a time, I became one with the backlog. As a result, I had the most fragile of dreams- though some may call them waking nightmares. However, it had the curious side effect of forcing nouns to spill out of my mouth like I’m a Japanese game developer. On that note, one of the games that jumped out at me over the last couple weeks was a game that I apparently never finished from around 11 years ago- Fragile Dreams: Farewell Ruins of the Moon. 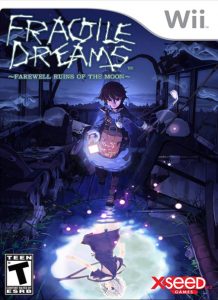 Fragile Dreams: Farewell Ruins of the Moon is an action adventure game with survival horror elements, and it opens with a young boy named Seto who laments that he had to bury the only other person he knew. Reading a letter left behind by the boy’s deceased caretaker, Seto ventures toward a tower in the distance in search of other survivors, hopefully allowing him to find some much needed companionship. The world of Fragile Dreams is set in the future, after some kind of cataclysmic event that caused humanity to disappear, and ghosts to appear in their place. In this post-apocalyptic setting, the world feels more like a phantom visage of a world long-gone, where you find ghosts and fragments of memories that can elucidate various stories set long before the start of Fragile Dreams.

You’ll find various items as you venture across the deserted landscape which hold memories of their previous owners- at the bonfires, which function as saving and healing points, you can view the stories of people from a time gone by. You’re effectively using the flame of the bonfire to glimpse into the past, and a lot of the additional tales can elicit sadness, anger, or even laughter from the viewer. What you really wonder about is how all of these records of the past connect into the overarching plot of the game, and several of them do, but you won’t be able to connect the dots properly until the game’s climax. These memories make an interesting dichotomy, as they flesh out the worldbuilding substantially and even get you invested with characters who are given exactly 0 actual screen time, but Seto, the character you play as, is pretty much alone for most of the adventure.

That isn’t to say you’re alone for your entire adventure- spending the entire time solitary with only the voice of Seto to entertain the player would get old pretty quickly. Shortly after leaving the observatory that previously was Seto’s home, he runs into a human girl, who quickly escapes. Finding this other human being- another point of contact, becomes almost an obsession for Seto who desperately doesn’t want to be alone. Also along the way, Seto befriends some more friendly spirits, and even a robot. 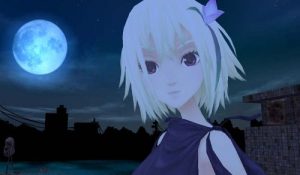 While Fragile Dreams presents like a survival horror game, it is both at the same time so much more, and so much less than that. It’s not overtly scary: Sure, you may wander through dark locations with a flashlight as your major source of light, but floating jellyfish apparitions don’t make for particularly terrifying foes, though there are spectral hands that will extend from walls and try to grab you, ghostly masks, and even hellhounds that you may need to defeat.

The largest issue with Fragile Dreams is that the combat is pretty mediocre, and oftentimes repetitive. Some enemies you need to figure out exactly how to damage them, and after doing that, you simply hit it until it dies (again). For the most part, it’s obvious that combat is not the focus of the game, and you won’t spend the majority of your time in battle unless backtracking a lot, which will be expanded on later. Due to the fact that Fragile Dreams is a Wii title, it was primarily designed to use the Wii Remote as a pointer. So while you may move Seto with the left stick of the nunchuck, you actually point Seto’s flashlight by moving the Wii remote around.

A very interesting feature is that, depending on where you aim the Wii Remote, the speaker on the remote may make sounds to signify what you’re looking at, and even change the volume of the sound depending on how close you are to it. Sometimes this is used for environmental design, like hearing a creaky hinge, other times it can be used to pinpoint where a vengeful spirit may be laying in wait to catch you unawares. Truthfully, the usage of the Wii’s often forgotten features shouldn’t go unnoticed, because this is one of the rare cases where the experience was actually made better due to the remote speaker, because it allows them to design sound-based elements using three dimensional space rather than just using player position as the sole determining factor- it’s pretty neat. On top of that, if you ever get lost or need a hint, and you have a robot or spirit companion with you, simply raising the remote to your ear will let them speak to you and remind you of your current goal. 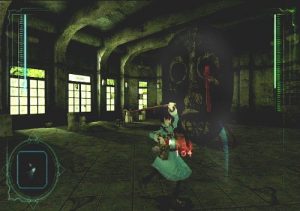 You will spend much of your time exploring the crumbling and empty world around Seto- you’ll climb, crawl while prone, squeeze through objects, solve puzzles and navigate through mazes, and more. There’s limited inventory space, so sometimes you’ll need to choose whether you want to carry spare healing items versus an additional weapon. Unfortunately, items that hold memories also compete for the same inventory slots that weapons and healing consume, so you may find yourself running back and forth to bonfires when you otherwise would not have had to do so, or straight up leaving new equipment behind because you have to know what happens next in the memories of the seven bells. This adds an unnecessary amount of tedium that really should not have been present, given the game’s focus on storytelling. There are also very few enemy types overall, and they respawn an awful lot which can actually make the aforementioned backtracking even more exhausting, which is a shame given that this is maybe a twelve hour long game.

Fragile Dreams is a solemn experience. It’s not quite survival horror, but takes a more thought-provoking approach with weaker combat than most would like. The game simply has incredible creative potential with a metric ton of flaws in some elements of game design that can make the game an easy recommend to those that enjoy story-focused gameplay, but for those who want a more interactive, fast-paced experience… this is not a game for you. While this game has incredible artistic merit in how it utilizes shadows, lighting, and storytelling elements, it gets bogged down by the most inane design choices. It’s one of those games that can only really be recommended to a specific type of player, but for the player with which this type of game resonates, it becomes an incredible experience, and now one of my personal favorites- which is why I thought to share it with all three readers of this column!

That said, having fragile dreams wasn’t the only thing I had in the last couple weeks. Due to some bad news, I actually slipped back in and played one of my more traditional, comfort food RPGs, and the one I picked this time was Terranigma for the SNES. In Terranigma you play as Ark as you revive the world to correct a terrible mistake caused by opening Pandora’s Box, and you adventure through a variety of lands in a top-down action RPG system that honestly was among the best of its time. 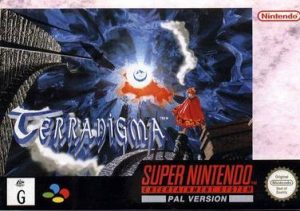 Terranigma starts off as the quintessential classic: An intro occurs, telling you about the light and dark sides of the world, one becoming known as God, the other as the Devil, and then… the protagonist awakens up as his cheery girlfriend wakes him, revealing that the worldbuilding back story that you were subjected to was actually Ark’s own dream. Then you can talk to townspeople, who tell you that Ark is a troublemaker, and then you’re told about a box you shouldn’t open, and that’s all that happens, game over, what a short ride.

Okay, you immediately know that you’re going to open that box, and Ark cracks that box like it’s a pot in Zelda- and a small demon appears that freezes your entire village into crystal. You’re then tasked with traveling into the underworld and conquering five towers to restore the world, though your journey won’t just end there. Villages teeming with undead? Medieval castles? Futuristic environments? The locations of Terranigma are both numerous and varied, and it’s a tour de force of fantasy from beginning until the end.

Terranigma is one of those old JRPGs that somehow manages to demand the player master platforming, puzzle-solving, and fast-paced combat. What makes Terranigma really, truly special is that it doesn’t do any of these elements poorly; this really is a complete package of a well-balanced, solid game. The sprites are gorgeous and wonderfully animated, and the controls are so responsive that it makes combat an absolute joy. There’s a wide variety of weapons to choose from, and you can even use magic, though I mostly didn’t bother since you need to use gold and rare magirock to craft rings and pins that are single use consumables for the purpose of casting spells, but it can be really useful against a specific boss or two. 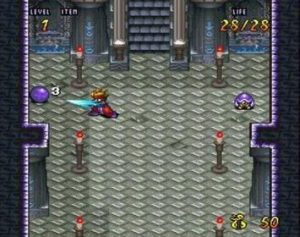 It’s hard to describe since Terranigma is pretty simple in execution: You might encounter areas where you need to jump from one platform to another, so you can jump, do a jumping attack with your weapon to kill an enemy and then jump off that platform to another all in one fluid motion. Coming from the same console on which Secret of Mana and similar controlled solidly but without such fluidity, Terranigma is a breath of fresh air. There’s still a leveling system in play, lots of items and equipment to find, a fluidity of movement during combat, and a wonderful story that is legitimately quite good even viewed through a 2021 lens, and it was portrayed in a very unique manner (none of that, “Good for 1995” shtick).

Terranigma is one of those games that I would definitely recommend to any fan of action RPGs. If you liked Secret of Mana, Illusion of Gaia, and more, you’ll most likely be able to appreciate everything Terranigma has to offer. In fact, the only downside to this game is that it was never released in North America, which makes tracking down legitimate copies of it in this day and age pretty difficult.

With that said, this week’s Save State has hit ctrl+S, and it’s almost time to ctrl+W to draw to a close. Hopefully sharing some of these older games with you ignited a spark of making you want to try out older games you may not have previously heard of before, or maybe just clean out some of your own backlog. In any event, we’ll be here in a couple weeks to talk about more random games from a backlog pile that never seems to get smaller. See you next time!