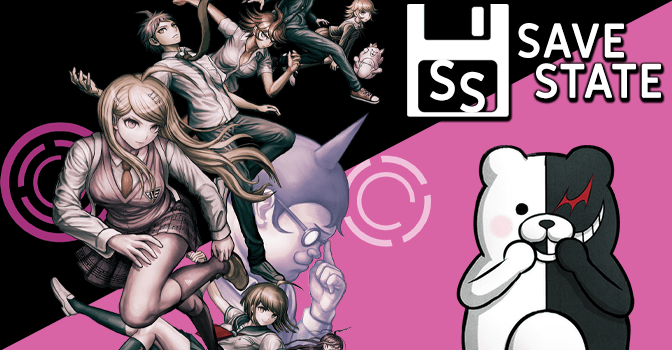 Welcome to Save State, where we Dangan your ronpas so you don’t have to. Danganronpa Decadence dropped last December, a port of four Danganronpa games for the Nintendo Switch. Feeling the urge to play a decent visual novel can lead you to checking out some very strange games, and it had been years upon years since I last played any of the Danganronpa games, so I thought to check them out on my Switch. Lo and behold, a game series I literally could not spell without sounding out in my head for the longest time had received a Switch port, and I quickly snatched it up to revisit a game series I had enjoyed around eight years ago. 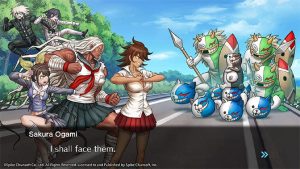 Danganronpa Decadence comes with four games in one: Danganronpa: Trigger Happy Havoc, Danganronpa 2: Goodbye Despair, Danganronpa V3: Killing Harmony, and Dangandonpa S: Ultimate Summer Camp. The first three are visual novel murder mysteries, and the final game is more of a bonus, as it’s an extrapolation of post-game content of V3 that lets you continue playing with characters you’ve seen over your dozens of hours of playing the other games- it’s definitely not the one you want to start without having played the others first.

Danganronpa is a special kind of nonsense, combining the classic Battle Royal style premise with a series of Saw-like killing games. A group of students is dropped into a dangerous situation in each game, with various motives given to incentivize the kills to murder one another. You control one of the protagonist characters, and navigate the personality quirks and sudden deaths of other characters in the cast. An evil little bear encourages the kids to kill each other through various means- sometimes its even an offer they can’t refuse like, “Only the person who can kill one of you and get away with it can leave this place.” Once a murder has been committed, a trial is held- using the evidence gathered, you play a variety of minigames to arrive to the truth and punish the murderer… or die, yourself, while they walk free. 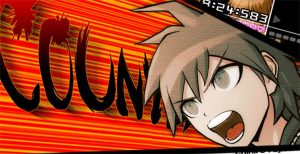 The killing game portion of Danganronpa is easily the largest draw of the series. A character you may have loved interacting with might have offed somebody while also setting you up as the murderer- it’s really entertaining stuff. Gameplay of Danganronpa titles during the investigation phase is very similar to what you’d expect: you use a point-and-click adventure interface to click on various objects in the environment to acquire clues and evidence. During the trials, however, a variety of minigames will get thrown at the player, from a game where you need to literally shoot down the lies of other characters (“Trigger Happy Havoc” get it?), a rhythm minigame, one that requires you do mind snowboarding… no more context is really needed there, that’s how we all think, right? Snowboarding down a grid from Virtua Fighter? No? Just me? All right then. 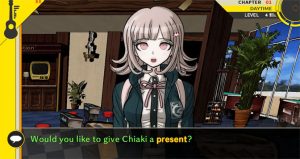 The single largest issue I’ve had with Danganronpa, especially in the first couple games, is that characters repeat simple, obvious things time and again. There’s a trope in Japanese localization where a character will say something, then the protagonist character will repeat it with a question mark at the end, and Danganronpa does this hundreds of times in just a couple of games. Imagine something like, “He changed all of the clocks to make us believe it was 7AM” and the player character will say, “He changed all of the clocks to make us believe it was 7AM?” Sometimes 8-12 text boxes will be used to exclusively retread information the player has already seen or already knows, with 6-7 characters chiming in to produce dialogue that is really of little value to the player (it’s not even flavor text- they literally just repeat info from a couple text boxes before). Once you notice how often this happens, it may drive you mad, but if you’re patient and a quick reader you can blitz right through all of this text when you notice the game droning on. 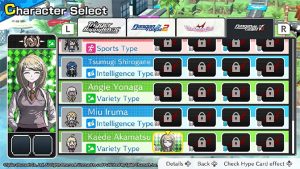 As someone who absolutely adores the Ace Attorney and Zero Escape series, Danganronpa is just as good as they are. These are very, elaborately creative games that, if you can suspend your disbelief, will take you on a wild ride where you desperately want to know more information about the world. Danganronpa is also a much slower burn than Ace Attorney or Ghost Trick, because while you’ll be taken on a ride of killing games, the first couple games barely explain the world or the, “Biggest, most awful, most tragic event in human history.” The first game even ends on a cliffhanger. 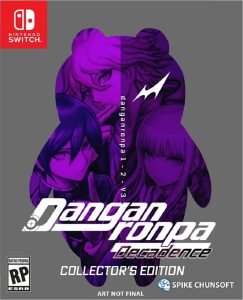 Then in the second game they allude to that event a couple of times, but you need to get most of the way through the game before you’re given any reasonable context to sate your inquisitive desire to know more about the universe. That’s a ton to ask of a player considering the length of these games, so I can understand some players not enjoying them too much. Thankfully, having all of the games in one package will do wonders for giving you incentives to continue the story, making Decadence one of the greatest things to happen to this series since edgy two-tone bears. All in all, if you pursue even a little of the side content, Danganronpa Decadence will probably keep you busy for 50-60 hours. If you decide to pursue all side activities to the fullest, you’re going to be in it for the long haul.

If you do manage to stick your way through Trigger Happy Havoc and Goodbye Despair, which are by no means bad games since the murder mysteries in those games are involved and alluring, you can play one of the finest visual novels of all time: Danganronpa V3: Killing Harmony. V3 is my favorite game of the bunch, and the one I’m glad I returned to, as when I first played it years and years ago, I ignored all side content so I was missing a lot of context for why specific character behaved in certain ways. Even when you’ve cleared the main story, V3 will have you coming back for more because it’s that well designed of a package. From music to art style, everything in it is top notch.

Strangely, though, Danganronpa Decadence has a bonus fan service spin-off game that gives more information about the characters, instead of having the spin-off game that’s actually connected to the overall story of the Danganronpa Cinematic Universe. Ultra Despair Girls is a spin-off, but information given in that game greatly enhances the enjoyment of V3, to the extent of which I’d recommend reading up a summary of that game after beating the second game, Goodbye Despair. To add on top of it, there’s an anime, Danganronpa 3: The End of Hope’s Peak High School, that does not have a video game equivalent and also enhances the enjoyment of V3. You’d think that the anime labeled Danganronpa 3 would be the anime re-telling of the third game, like the first anime was for the first game, Trigger Happy Havoc, but it’s not! Confused yet?

So, for those of you wishing to get into the Danganronpa series, here’s my suggested play/watch order of this series for those interested: 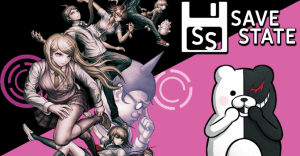 Play Danganronpa: Trigger Happy Havoc. The anime is pretty good, but the game obviously has more detail into all of the various events and characters. After that, play Danganronpa 2: Goodbye Despair, which will give you more information about the Future Foundation and other things relevant to the worldbuilding of Danganronpa. Upon clearing Goodbye Despair, I’d recommend jumping to Danganronpa Another Episode: Ultra Despair Girls, which will give you a lot more information on The Tragedy. From there, the Danganronpa 3 anime is a great place to visit next, and be sure that you’re properly alternating episodes (they made two arcs of 12 episodes each, and you’re meant to watch Hope episode 1, Despair episode 1 before moving to Hope episode 2), and then finally, Danganronpa V3: Killing Harmony.

They effectively stretched the worldbuilding across four games and an anime, but the slick presentation style and expert-level use of cliffhangers can help keep you coming back for more in between murder mysteries. Danganronpa is a wild ride with some elements that just outright didn’t age very well (they like injecting fan service a lot, even when it’s unnecessary. Poor Mikan), but the series dramatically improves when you don’t have to wait years and years between iterations to see the resulting conclusion. 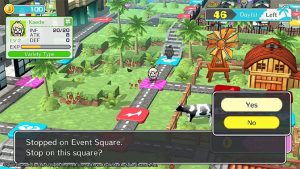 Danganronpa definitely isn’t the kind of game for someone who hates visual novels, even if this game does have timing-sensitive gameplay mechanics in its trial minigames, and if you hate anime then you really need to stay far, far away. Danganronpa takes anime tropes, sews a quilt out of them, and intimately curls up with that trope-quilt and a cup of hot chocolate on a chilly evening. Being unable to suspend your sense of disbelief can hurt the experience quite a lot as well (as in, you really like going, “Wait, why did they make this so complicated, they clearly did not need to do all of that”), but if you want to engage with a story on its merits, there has never been a better time to try out the Danganronpa series.