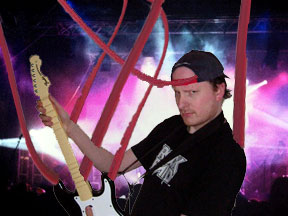 Before I start with my commentary for this week, I want to mention that I am currently taking part in a new venture. Along with our latest correspondent Kelly, we have started a new podcast called Gamer Geeks. What I decided is that we can use our program to cross promote what we write about here on GiN in order to reach a broader audience. In any event, our premiere show will be posted at www.repetitivetraumaradio.com beginning this Saturday.

Be warned though, our program contains some harsh language that might be inappropriate for those of you with sensitive ears. But you know what? It's mine and Kelly's program to create, so feel free to send the hate mail.

But in any event, I had a lot of stuff planned for this week, whether it was the debut of Gamer Geeks or wondering why people would be spending $40 for Gran Turismo 5 Prologue, whether it would be available as a digital download or on Blu-ray. It doesn't make sense to me at all. Why spend $40 on what is nothing more than a glorified DEMO? Why doesn't Sony just wait until the full game is ready to release it?

And while we're at it, where is Gran Turismo for the PSP? Look Sony, Gran Turismo 4 is a disappointment, and the series is on a downhill slide. Wait for a full version of GT5 to come out instead of just offering an overpriced demo. It would have more impact.

But earlier today something else came up that disappointed me a lot more. It all started earlier this week when my Rock Band Strat guitar finally broke!

At first it was the spring on the whammy bar, which was easily fixed with a rubber band. But eventually the strummer bar snapped, almost like I suffered a broken string. In the end I had to use my Guitar Hero Les Paul controller which didn't feel the same at all. It was effective for the time being, but I couldn't wait for the wireless Strat to be released.

I was able to pick up my wireless guitar, and at first everything felt like it used to, with the exception of being tethered to a USB hub. I had complete freedom.

I thought I was back to my Rock Band roots until I tried to activate Overdrive. So I tilt my new wireless Strat up and then"NOTHING!

That's right, while my previous Strat activated Overdrive at the slightest upward movement, this is not even responding at all on the new axe. In fact the only way I could activate Overdrive is to hit the Back button underneath the strummer bar. In doing so, I ended up missing some critical notes and blowing my score multiplier.

At first I thought I was the only one to suffer this issue, but after it happened, I spoke with Kelly, and she told me that there were others who had the same issue. Yes I know EA and Harmonix had issues with the wired guitars for the 360, and now they are coming out again with the new wireless models.

I'm really hoping this will get resolved soon, because I do favor the Strat for Rock Band.

Will I ever get used to the Back button for Overdrive? Of course I will. I play Rock Band way too much to not use Overdrive. I just hope to God that something positive comes out of this!

Waiting For: Metal Gear Solid 4 (PS3), Getting the tilt sensor on my wireless axe to work!