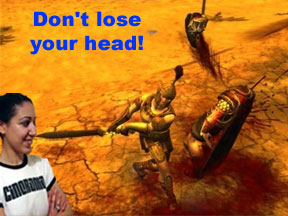 In the biggest MMO launch in the world ever, Age of Conan: Hyborian Adventures is certainly hauling in the punters. With access to the beta, I've been able to give a couple of characters a run for their money, to see what all the fuss is about and whether it's worth all the hullabaloo.

The first thing to say about AoC is, it's a hungry beast, so if you've got a bit of spare cash, you'd best spend it on a new graphics card, some RAM and a new processor, while you're at it. My PC was updated back in the day, when City of Heroes came out, so it only just scrapes in at the bottom end of the recommended spec. If I whack up all the options, it looks really, really gorgeous, but I have to stay real still, otherwise I get motion sickness. However, it proves that if you can afford to go high spec, then you won't be disappointed.

You all know I'm a character gen fetishist, so let's get down to it shall we? Well, the character creation screen is lovely and takes place below deck on a ship. Row upon row of slaves sit hunched over their oars and a female slave stands at the top end, looking underdressed for the occasion. Choose female and the camera zooms to the woman or choose male and one of the slaves stands up ready to be tweaked.

There are three races; Aquilonian which based on Romans, Cimmerian which is Conan's own race and based on the celts (think Mel Gibson in Braveheart) and lastly the Stytgian who are the snake god worshiping types, more akin to the Egyptians.

Expect to see the usual tank, healer and damage dealer classes, just with new and interesting names like Bear Shaman and Herald of Xloti. I have to say I am disappointed with the character gen, which dishes up the standard fare of sliders that make minimal difference. Bizarrely, you can't change the size or shape of the eyes, just their slant and depth, so the men have little piggy eyes, while the women tend to look like a Bratz reject. You do get to choose the grunt your character uses in battle, but they all sound like female tennis players.

The main niggle is the lack of hair styles; something that's so easy to provide, but is so often overlooked. The big brag of being able to recognise characters without their name tags is a load of old flange quite frankly. Have they learnt nothing from Everquest II and the City of games? It would seem not, as they still reign supreme in terms of character creation.

Once your character has been selected, the slave ship is hurled into a storm and you are plummeting to the ocean depths, until a mystical force pulls you out and you wash up on a beach. In the early levels, all NPCs speak, making it feel more like playing Oblivion, than an MMO. The acting is above average, so it's something to be enjoyed, rather than endured.

Funcom have made much of having lines of dialogue to choose from, think Mass Effect, however you soon realise that this is a merely cosmetic addition. In the end you simply click through dialogue in order to get on with the task in hand, as it's neither engaging nor consequential enough to keep you listening.

The first 20 levels are spent in the city of Tortage, which is basically "newbie island." Before even reaching the city you are given a couple of mini missions to get your levels up. Armed with only a broken oar, it's time to pummel pirates, the local wildlife and a few picts, if they get in your way.

Combat is AoC's other USP and I'm not sure if it's working for me, or even makes that much difference as far as I could tell. Click on your special moves and select a direction to attack a foe from left, right or front. Foes have shield markers, which tell you which side they are protecting. The markers move round if you attack from one side, opening the other side up to attack. Although my characters are only around the level 10 mark at the moment, I still didn't get any sense of the big wow. I am holding off any real analysis for now, as the test of a real MMO is in the intense playing at later levels. And I'm also wondering if the system will work better when it's released for the 360.

I have to say, when it comes to creating a lush, world oozing Conan from every poor, Funcom has hit the nail on the head. Tortage is a bustling city that feels like it has grown organically. Houses are piled up against one another with folk leaning out of windows, washing hanging out and people just going about their business. Go down the wrong alley and you'll take a beating from pirates while the corrupt guards just walk on by. This is a tough town and you're gonna need to sharpen your axe to get out alive.

In terms of missions, in Tortage there's no real reason to group, so I haven't got much to say on that side of things. The solo missions are pretty standard and involve the collect ’em ups, kill this, speak to them type stuff. However, little mentions of King Conan in your adventure do pique your interest and remind you of your place in the bigger picture.

I have to say, that one of my favourite things so far is the fact that money is hard to come by, and by level 10 I'm not groaning under the weight of all my gold. The currency has three units; tin, silver and gold and I still haven't got any gold, putting a real value on items and limiting uberness until higher levels.

In short, AoC is a game that has been lovingly crafted and only time will tell whether Funcom can get the delicate balancing act just right. I've only scraped the surface of the game so far, but if you like Oblivion and you like MMOGs, then this is for you. If you're looking for something other than Tolkein-based MMOs, then this could be just the ticket – it's a relief to get away from the elves and the orcs for a while.

Most wanted: Beyond Good and Evil 2