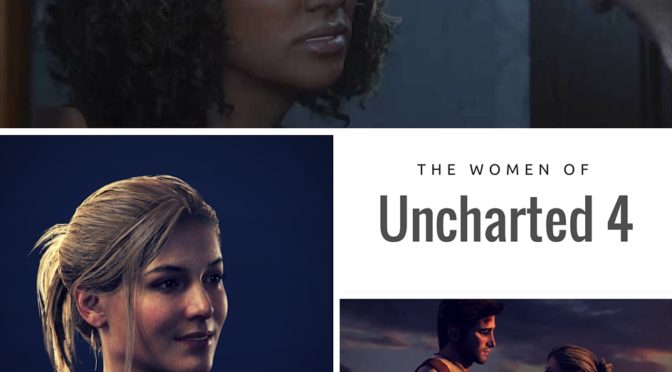 Note: Here be spoilers. Only read on if you have played Uncharted 4 to the end, as a major plot point is mentioned.

It’s no secret that I love the Uncharted series. It’s been a whirlwind romance, since a friend bought me the collection for Christmas. That’s right, I’d never played Uncharted before. And I feel bereft, now that it’s over. However, as with any romance, when it comes to an end, you get to look back and reflect and I have to say, the female characters in Uncharted 4: A Thief’s End were treated badly.

Uncharted is so loved because its characters are so loveable. Nathan Drake charms without being smarmy, whilst Elena is his conscience and tries to make him seen sense. And Sully’s got both their backs. But it’s the romance that sits at the heart of the Uncharted series.

The beauty of Nate and Elena’s relationship has always been that they are both strong, independent and capable. Elena matches Drake climb for climb and fight for fight. She never needs rescuing and, in fact, often saves him, either from himself or circumstances.

However, over the course of the series, Elena has been slipping into the marital ball and chain role. In Uncharted 3, Drake and Elena have been married and separated because Nate walked away (we think). The last scene plays out with him slipping on his wedding ring again and Elena rushing, thankfully, into his arms.

At the beginning of Uncharted 4, the pair seem to be happily married, except that Nate is bored by domestic bliss. He’s yearning for adventure and literally plays with toy guns in the attic. It’s clear that Nate is sticking with the day job for Elena’s sake.  And even though she encourages him to take the Malaysia job, he declines, but I’m never quite sure why, apart from to serve the plot.

When Sam arrives, Nathan lies to Elena and jumps back into adventuring, leaving her at home thinking he’s decided to go to Malaysia. This is Nate’s biggest douche moment and conveniently, leaves Elena out of the picture for a significant part of the game and that’s okay, if disappointing. This story is about finding out who Drake is and that means meeting his brother.

Fine, we’ve got less Elena, for the sake of telling the Sam and Nathan story. However, I do take exception to Naughty Dog then being featured in numerous articles as standard bearers for creating strong women in games. This is how it’s done. What, sidelining your most established female character, along with your new ones? And that leads me on to Nadine Ross.

Nadine Ross was a massive disappointment to me. As a woman of colour (WOC), I was excited to see her and her natural afro hair texture, rather than the cornrows or just straight hair we usually see on black, female characters. Added to this, she was described as a formidable force by Nate and Sully. And sure enough, when we saw her she was strong and sexy and intelligent – things were looking good. Alas, that’s where it ended.

The end of Nadine’s story arc saw her go from a woman leading her own army of mercenaries to being kidnapped by Rafe and betrayed by all her men. And her army was all men. That’s one way to put a female character back in her place – strip her of all power to serve a story which is focused on male love and betrayal.

These two disappointing stories for the female characters of Uncharted 4 appear against the backdrop of media praise for Naughty Dog’s portrayal of women.

In an interview with Gixel, Creative director of Uncharted 4, Neil Druckmann, said, “When I’m introducing and describing a new character to our lead character concept artist, constantly she will ask, “What if it was a girl?” And I’m like, Oh, I didn’t think about that. Let me think, does that affect or change anything? No? Cool, that’s different. Yeah, let’s do it.

“Initially, in the epilogue, it was Nate’s son. Something similar happened with the mansion they go into. That was an old English guy’s house. She asked, Well, what if it was a woman?”

Druckmann’s first question is, ‘does it change anything?’ So what if it does? If we can only have female characters, as long as they don’t alter anything, then we’re limiting ourselves and the stories we tell.

Whilst I appreciate Naughty Dog’s effort, the notion that we should pat them on the back, simply for including some women is insulting. The women in Uncharted 4 were sidelined to make room for the men, who had the bigger story.  Naughty Dog are better than many big developers out there, but they are not good enough. Not by a long shot.