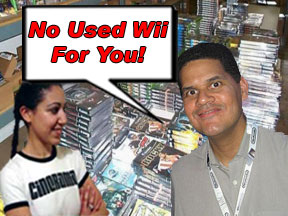 I've really seen it all now. If there was ever a load of corporate crapola it's got to be Nintendo America president, Reggie Fils-Aime, saying that used games aren't in the best interests of the consumer. Well, Reggie old chap, I do beg to differ. Hmm, let's see I pay Â£40 for a brand new game or wait a couple of weeks and pay around Â£30 or less. Call me old fashioned, but that sounds like it's saving me money – always in my best interests.

It's okay, I see what's happened here. I can't believe I didn't see it before. Reggie's obviously confused the word "consumer" with the word "Nintendo." What he meant to say was, trade-ins aren't in the best interests of Nintendo. Unfortunately, that's not what he said. Apparently, we're all so dense that we're short-changing ourselves by buying used games.

In an interview with Venturebeat he said," More and more retailers are experimenting with the used game model. We have products that consumers want to hold onto. They want to play all of the levels of a Zelda game and unlock all of the levels." Yeah and we can do that just as easily on a used game, as we can on a brand new one. He continues, "A game like Personal Trainer Cooking has a long life. We believe used games aren't in the consumer's best interest."

There – he actually said it. Who's he trying to kid? I guess he hasn't noticed the recession and thousands of job losses. Is he really concerned with our wellbeing? Somehow I think not. I have a sneaking suspicion that he's really concerned with his bottom line. That's fair enough, he's president of a company and he wants it to make money – seems reasonable. However, I must object when he tries to dress it up as some kind of misjudgement on the part of the consumer.

Reggie goes on to compare games with used books and CDs. He says, "Used books have never taken off. You don't see businesses selling used music CDs or used DVDs." I guessed he's missed the whole eBay and Amazon marketplace phenomenon then. "The consumer likes having a brand new experience and reliving it over and over again. If you create the right type of experience, that also happens in video games."

I don't know about the US, but over here Oxfam has whole shops dedicated to just selling used books. Charing Cross Road in London is famed for its second-hand book shops. Apart from the fact that books, CDs and DVDs are a fraction of the price of a game, I'm thinking there could be a few holes in Reggie's argument. Maybe I'm just being cynical and bitter. Oh, no, wait – read on and Reggie reveals his true colours.

The suggestion that maybe retailers could share the profits of trade-ins with publishers soon brought a smile to his face, saying, "That could make it more palatable. But we just think it's a bad idea." For you maybe Reggie, but not for gamers. I appreciate his perspective, but to try and give it some spin and imply he's doing gamers a favour is really too much.

Talk about underestimating your audience Reggie – we're not as dumb as you think. And the sooner you realise that, the better for all concerned.