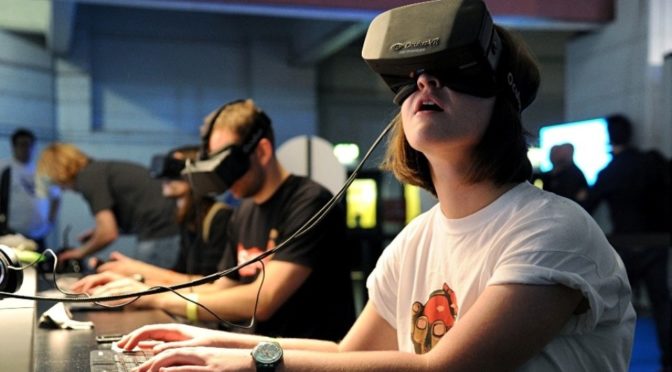 Virtual Reality (VR) seems to feature in every other headline, these days, but I’m withholding judgement. The exciting thing about virtual reality is it offers us opportunities for more than just fun and games.

No matter how much they try to convince me, I just can’t help thinking VR is not going to be as fun as we think, once the initial ‘wow’ wears off. Given the choice, I’d go for augmented reality every time.

This week has seen some interesting VR headlines that sort of prove my misgivings. However, if you tune into the Argue the Toss, we’ll be talking about Drew’s first-hand experiences in VR, as he recently splashed out on a set.

I see the total immersion as one of the main drawbacks of VR. Because you’re totally cut off from your surroundings, it’s an anti-social activity within the household, unless the whole family jumps into the virtual. And then there’s the movement issue. Do you have to clear the room, in case you walk into the furniture while trying to fight a virtual hoard? All questions I’ll be asking Drew.

However, it seems Reed Hastings, CEO of Netflix holds some reservations too. In a recent interview with VentureBeat, Hastings admitted that VR isn’t a priority for Netflix because it doesn’t suit the binge-watching culture the streaming service has cultivated.

Hastings admitted that  VR is “going to be huge for the video game market” and “I expect it will have a big impact there.” He went on to say that the immersive nature of VR works in a gaming context, but could become overwhelming for watching a film or TV.

Hastings added, “You’re exhausted after 20 minutes. We are more focused on a lean-back, relaxing experience.”

Netflix’s chief content officer, Ted Sarandos, added, “I can’t imagine putting on a VR headset while sitting on the couch with my wife for two hours and just disappearing.”

My thoughts, exactly, Ted. Maybe I’m being a bit of a Luddite, clinging on to my traditional idea of reality and finding it sad to think that a whole family could be reduced to meat bags in goggles, on the sofa, all on a fun day out in the virtual.

The video below shows Derek Westerman setting the VR world record by staying in the virtual for 24 hours. Doing anything for 24 hours is rarely a good idea, but this looks particularly gruelling. He vomited part of the way through and had a period of adjustment back to reality. It’s an interesting watch and confirms my suspicions that long periods of gaming in VR could be uncomfortable.

On the other side of the equation, some recent research from Oxford University suggests that VR could play a vital role in treating mental health issues.

I haven’t experienced VR, personally, so my scepticism could be shattered the first time I try it out. It’s clear, from watching footage, that it’s an amazing experience because  your brain is fooled into believing in that virtual reality. In fact, Westerman, the record-breaker, found he was questioning reality once he took the goggles off.

An Oxford University study with patients from the Oxford Health NHS Foundation Trust found that VR simulations could help people with persecutory delusions cope with different situations. These kinds of patients may suffer from paranoid thoughts, such as people wanting to kill them, knowing what they’re thinking or wanting  to mock them. It’s very difficult to live with and can even stop people from leaving the house.

However, the studies introduced patients to simulations of situations, such as a crowded train and encouraged to make eye contact or stand next to gradually increased numbers of people. The brain accepts the situations as real and the patients learn that the situations they feared are actually safe. These virtual experiences then help  them cope in real life scenarios.

Professor Freeman, the study lead at Oxford University and clinical psychologist at Oxford Health NHS Foundation Trust, said: ‘Paranoia all too often leads to isolation, unhappiness, and profound distress. But the exceptionally positive immediate results for the patients in this study show a new route forward in treatment. In just a thirty minute session, those who used the right psychological techniques showed major reductions in paranoia.”

Professor David Clark, a member of the study team, said: ‘There is growing evidence that psychological treatments can have a major beneficial impact on the lives of people suffering from psychosis. Virtual reality assisted treatment has great potential because, as the price of the equipment makes it more accessible, much treatment could be delivered in people’s homes.’

That’s a really positive consequence of our demand for VR technology, as gamers. The fact that the technology is being developed for people to play games in their homes means it needs to be affordable, which means it can be bought by healthcare organisations and even part of prescribed treatments at home.

VR is here and I’m hoping to see what it’s got to offer at E3 2016. Despite my misgivings, it’s clear that gaming in the virtual is an exciting prospect, but I’m not getting a padded play room installed in my home, just yet. What’s really exciting is the prospect of other applications for VR, beyond gaming. For instance, researchers at Stanford University are using VR to examine racism and sexual discrimination. VR is exciting for gamers and society in general.

Of course, when that killer VR gaming app lands and I jump in, you can just drop by to say ‘I told you so’ and I’m okay with that.