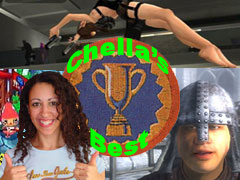 Well, it's that time of year again dear play chums. Believe it or not it's time for the annual round up of the good, the bad and the downright unplayable. I must say, 2006 hasn't been a vintage year for me when it comes to gaming. Maybe the surf was calling me and I just didn't have my finger on the pulse or maybe somebody needs to pull their finger out and come up with something inspiring.

Needless to say, there were a few highlights – and only a few mind you.

The year 2006 can be remembered as the year that Lara returned to form. She was back in the tombs, with dust on her behind and dirt from ancient artefacts under nails, but added to that she also had some pretty nifty acrobatics skills going on. Wise-cracking sidekicks aside, TRL brought back the good old days. The soundtrack was great; the settings looked fantastic and chez Croft had some interesting extensions.

Another 360 title (and PC) that really stole the limelight. Oblivion is still top of my most played, purely because it's so vast, but amazingly accessible. I'm looking forward to the season festivities dust settling so I can spend mid-winter immersed in this sprawling RPG. I've yet to find a unicorn or even raise enough money to buy a faster horse, but such riches await me and it's gonna be good.

Now this was a surprise hit! Much like the movie, the game was an entertaining romp with lush visuals, great audio and some great set pieces. Playing with my boyfriend, we took it in turns in slam-dunking dinosaurs into hell and back. Kong had some great moves, but if your frenzy turned into button-mashing mayhem he'd go into spasm and get killed. I passed a very entertaining afternoon smashing through the beautifully rendered jungles and advise you to do the same.

You can't really get away with a 2006 retrospective without mentioning Gears of War. One of the few that lived up to the hype and made jaws drop this year. So much more than just something to chew on before Halo 3 comes along. In fact, it's something of a benchmark and only 2007 will tell us if the challenge shall be met.

Life without Animal Crossing would be bleak, colourless and frankly pointless. And for all those commuting gamers, 2006 saw AC chortle its way onto DS. Hooray for midnight fishing and pulling up weeds and checking for mail from your animal friends.

While we're on the subject of mobile gaming, PSP owners actually had something to cheer about for once. There was a moment when the screams of anguish, at having thrown their money down the drain on a flash, but next to useless gadget, abated. It was the moment that Vice City came to PSP. The greatest moment in the GTA games, Vice City's clever period observation and brilliant gameplay, combined with an interesting plot is something that should be revisited again and again.

So, there you have it – my list for 2006. I hope you've played them all, or are currently engaging in some self-flagellation to appease the gaming gods. I'm sure some of you are sitting head in hands crying, "How could she have omitted game A or game B?"

Well, I'll admit, there are a few omissions that I must own up to.

One of my most wanted for about two years. It's sitting on my shelf, but unfortunately it's an NTSC version and the PAL version isn't out here until next month. I should be lucky that it's coming out over here at all, but if I'd played it in time I'm almost certain it would have been one of my hallowed games of 2006. Never fear, I shall give it the honours it deserves as soon I get my clammy paws on a playable version.

Yes, it's finally launched and it's got to be one of the greatest moments of 2006, even if we did have to wait longer over here in England than you guys in the States, as usual. I've operated self-restraint. It's a strange thing dear play chums and I wouldn't recommend it on a regular basis, but needs must.

December and January are busy months for me because, as I've mentioned, I'm currently in the midst of moving to the other side of the country. Okay, so our fair isle is only small, but I have a lot of stuff and my boyfriend has a welder (don't ask). So, measuring available playing time against cost and long-term gain, all entered into a complicated equation, buying a Wii wasn't on the cards. However, once I'm back in the country after Christmas, in a house and have found my TV again, I shall purchase one (Nintendo stocks allowing) and praise be, the world shall be back on its access. Until then, enjoy yours and pity me.

See above. Although I could buy it on Gamecube I think my cube is in Devon at the moment, which is about three and a half hour's drive from London – dag nabbit!

Now we can turn our thoughts to next year, while enjoying the harvest of 2006. I've got my eye on a spot of volley ball and the like with the DOA girls and Age of Conan should be coming our way online soon. And then of course there's the long-awaited arrival of the PS3. Oh, and not forgetting Halo 3.