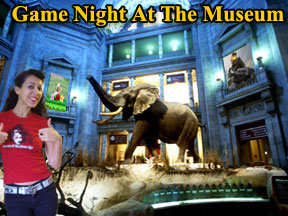 If you don’t like these, you can vote for your own

Could the "are games art?" debate be over as The Smithsonian Institution, the National Museums of The United States, puts together an exhibition on forty years of games? Dubbed The Art of Video Games, the exhibition focuses on the visual impact of games and the creative use of new technologies. It covers five eras of gaming, right from the early years, through to present day. It also aims to look at the influences games have on popular culture, TV, art and film, as well as their use in education and professional training.

In the true spirit of interactivity, the Smithsonian is calling on everyone to vote for the games they would like to see included in the exhibition. Simply login and vote for your favourites out of the 80 games listed, which have been selected by a panel of industry experts, including developers, designers and journalists. The games have been put into categories covering five different eras, starting with 1970 – 1980, which are then further divided by genre and finally, platform.

I’ve had a look through the list and it’s fairly comprehensive, but there are inevitably some strange omissions and even more bizarre inclusions. Can I just say, no PaRappa the Rapper, but Brutal Legend is included? Yes, the very same Brutal Legend, which was a decidedly average Jack Black vehicle. Now, remember, this is an art exhibition, so it’s focusing on the visual impact of a game. Whilst Brutal Legend did have some amusing nods to metal album covers, it wasn’t exactly visually arresting and certainly not on the scale of PaRappa. Similarly, Paper Mario was included over our favourite rapping onion head, which surely served as inspiration.

Another notable omission from the list is Tetris. The visual impact of this game is such that many a player is left playing Tetris in their dreams, as coloured blocks fall past their closed eyelids. Similarly, the starkness of Pong makes it one to be remembered, if only in hindsight.

It’s interesting that at a time when the games industry itself is focusing more on narrative, this exhibition focuses purely on the visual and the use of technology. In some ways, the industry’s preoccupation with reaching new visual heights and pushing pixels has overshadowed the development of storytelling in games, but things are beginning to change. It’s a shame that this shift isn’t being explored by the Smithsonian, but it is an art gallery and aesthetics are easier to convey in a gallery setting.

If you would like to see the complete list and vote for your favorites you can do so until April 7th.

Using the Smithsonian’s focus on the visual impact of games, here’s my top 10 choices to include in the exhibition.

1) Super Mario Brothers – The gold coins, the magic mushrooms, the tubes, the music, the sound effects. Do I really need to explain?

3)
Ico – this game brought us a new aesthetic, using sun bleached visuals to create a fictional world that feels rich in mythos, even though we don’t even speak the same language as any of the characters. (not on the official list)

4) Vib Ribbon – a black screen with a single white line running horizontally across it. Stick in a music CD and the line reacts to the sound and rhythm to make different shapes. You play as a stick rabbit figure and must use the rhythm of the music to tackle the obstacles. Simple, yet innovative. (not on list)

5) PaRappa the Rapper – Okay, we’ve got a dog in a beanie, a rapping karate teacher, who is in fact an onion and they all look like 2D paper dolls. This rhythm action game stood out from the crowd and was part of the heyday of Japanese titles.

6) Jet Grind Radio (Jet Set Radio in UK) – this was one of the new generation of cel-shaded games and arguably the best. It’s future Tokyo, sparks fly from your roller-blades, as you grind and graffiti your way around the city. Visually arresting, combining superb gameplay – bring back Jet Set.

7) Space Channel 5 – Ulala’s retro future world was a breath of fresh air, with an emphasis on high camp and fun. A classic. (not on list)

8) Shenmue 2 – the beginnings of open world gaming, but what a world. Low-flying planes over Hong Kong. A bustling city, full of distractions and a new kind of gaming.

9)Halo – this game represented a leap in console gaming. Oh, how we gazed at the grass and marveled at the visuals. It also brought the FPS to consoles. And the rest is history.

10) Metal Gear Solid – the visuals were outstanding and we’d never seen cinematics like it. The game also played with the theatrical fourth wall and introduced a new level of detail and attention to narrative and gameplay.

So there you have it. My pics for the most-artistic games of all time. Are you listening Smithsonian?

Most wanted: Child of Eden