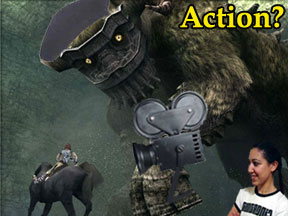 Shadow of the Colossus Movie? Really?

It would appear that Hollywood hasn't been heeding the words of wisdom available at The GiN Lounge. Hot on the tail of our podcast marvelling at the woeful track record of movies of games, comes the announcement of Hollywood's latest plundering of the game archives. According to reports on Variety, Shadow of the Colossus is the next game to get the big screen treatment.

Now to say that Shadow of the Colossus is hallowed would be an understatement. It sits close to the hearts of gamers everywhere, right next to Ico and woe betide anyone who f**ks this one up.

But it's okay, because Justin Marks ‘go to young scribe' for all things gaming in Hollywood (according to Hollywood Reporter) is writing the script. Who? I hear you ask. Well, let me just say, Street Fighter: Legend of Chun Li"Yes, that's right, Justin is responsible for scripting the movie Time Out New York said, "almost makes you yearn for the days of Jean-Claude Van Damme." Ouch. He's currently working on 20,000 Leagues Under the Sea for Disney, so we're not the only ones getting the Marks treatment.

With little to no dialogue or characters, other than a boy and his horse, Marks has got his work cut out for him. And with his apparent modicum of talent, it's not looking good. Shadow of the Colossus is basically about a boy who rides his horse across a vast landscape trying to resurrect a young girl. He has to confront a succession of sixteen giant creatures called Colossi, finding their weakness through a series of puzzles. And that's about it. So not really a movie in the making.

Much like Ico before it, Colossus offers us a beautiful, mysterious fantasy setting, sweeping, cinematic visuals, loaded with atmosphere and majesty. The game is minimalist to say the least, which means our erstwhile "young scribe" will need to create characters, backstory and dialogue. Uh, oh – this is where it could all go horribly wrong.

Surely part of the beauty of Colossus is the fact that we're presented with a world that poses a myriad of unanswered questions. We're left to fill in the blanks as we play, rather than being spoon-fed a load of old drivel. This empty, solitary experience becomes furnished by our imagination, as we wonder who the boy is, where he comes from and why the girl needs resurrecting.

Forgive me if I'm a little blunt, but based on his CV I don't think Marks is the man for the job. Most tragically of all, Guillermo Del Toro of ‘Pan's Labyrinth' fame has been quoted calling both ‘Ico' and ‘Colossus' works of art. If only he was at the helm. But the truth is, he probably respects these works too much to even give it a go.

In fact, I don't think ‘Shadow of the Colossus' needs to be a film. It's not going to make anyone pots of money – I mean, this isn't Halo or Gears of War; we're talking indie darling here. Most worrying of all, Variety said, "despite the game's somewhat ‘artsy' cred, they're hoping "Shadow" will be a "Lord of the Rings"-style fantasy tentpole."

It's moments like these that my stomach turns and my heart sinks. Although, if you think about it, books, comics and world cinema are regularly ravaged by Hollywood, so I don't see why we think we should be any different.