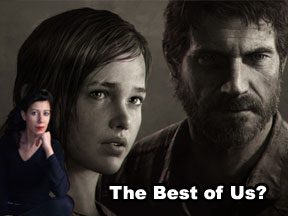 Great Storytelling in a Poor Field

**Warning: here be spoilers** Please don’t read ahead unless you have finished playing The Last of Us, or don’t care about some spoilers.

The Last of Us is one of the best pieces of script writing in a video game to date. Much praise has been lavished on this game, with Edge’s Jason Killingsworth going as far as saying that it aggressively subverts "the traditional male power fantasy." I don’t think it’s as successful as all that. It is a great piece of storytelling and characterisation within a game. But once we step outside the bubble of games, The Last of Us is a fairly standard dystopian survival road movie. That said it’s a very good rehash of an old story.

What makes The Last of Us so good are the characters. I actually felt emotional during some of the cut scenes and much like a good book, I didn’t want the game to end because I didn’t want to say goodbye to those characters. The only other games that have touched me in this way are Mass Effect, and to a lesser extent, Red Dead Redemption.

The opening portion of The Last of Us completely sets up Joel’s motivation for the rest of the game. We first meet Sarah, Joel’s daughter. She’s home alone and we soon get the picture of a single parent family with a girl who’s used to fending for herself. Sarah’s no princess, but the writers quickly establish that she has a good relationship with her dad. When Joel gets home he’s tired and Sarah gives him a watch for his birthday, which he wears for the rest of the game.

The game’s prologue ends with Sarah’s death, which packs an emotional punch because we already like this sassy teen, who quips with her grumpy dad. But her death is pivotal for Joel and he carries it with him for the rest of the game. Her death is the end of hope for Joel. And then Ellie comes along, which stirs up old emotions he’d rather forget.

Ellie represents hope and the longing for a better future. She is also a reminder of the pre-apocalypse past, for Joel, which is why he rejects her and tries to get rid of her several times. Joel and Ellie are in thematic conflict. He’s living for the moment to survive and she’s striving to change the world for the better.

The best written characters grow and change as their story progresses. This is called the character arc. Videogame characters rarely have an arc and this is what makes them mere mascots. Lara Croft, especially in the first three games, barely has a character at all. She’s got a posh accent and we know she has ‘dad issues,’ but these things have no impact on the way she deals with things. Master Chief is the classic space marine. He has so little personality that we don’t even get a face. He kills stuff really well, but we don’t really know what he cares about or why he does things. Halo 4 is perhaps the closest thing to a Master Chief with feelings and motivations other than ‘aliens bad.’ Master Chief and Lara Croft are standard fare in games, never-changing characters who don’t feel or react or grow. The Last of Us changes that without sacrificing gameplay.

Although Joel’s character arc is a massive cliche, I’m just glad he has one. I mean, how many times have we seen the world-weary, grizzled man as reluctant chaperone to either a woman or a child? We all know he’s going to come to care for Ellie. We all know that he’ll kill or die if he has to, just to save her. We know how the story goes, but it doesn’t matter because it’s so well crafted.

Between the tense battles with gun-crazed bandits and nightmarish encounters with infected, we’re treated to quiet scenes. As Joel, while we search through cupboards and drawers for loot, Ellie asks about the world ‘before.’ She’s curious about the concept of ice-cream vans and universities or the models on posters who appear thin, despite living in what was a world of plenty. She often expresses disdain with "Pfft." And little by little we learn more about Joel and see their relationship strengthen.

This isn’t really Ellie’s story though. She is a strong character and Naughty Dog has to be applauded for that, but she’s only a foil for Joel. She is someone for him to protect and drive his narrative forward. Whether you think this is a bad thing or not, the fact that we are drooling over Ellie, the feisty and smart, well-rounded character, just shows how low the industry bar is set for female characters.

At last we have a game that presents non-sexualised female characters, who can fend for themselves and have their own motivations. The only thing is they still don’t make it into the starring role. Naughty Dog’s Joel is the cliche stoic, be-stubbled strong, silent type and some have criticised the game for not telling the story from Ellie’s perspective, just to really subvert the genre. That would have been interesting, but maybe it’s just not the story the team wanted to tell and let’s face it, Joel’s journey is a captivating one.

But it’s not just Joel and Ellie who make the world of The Last of Us remain with you long after the end credits roll. They meet a wide cast of characters and each one feels like they’ve lived a life before we ever cross paths. Most notable is Billy, who is the least cliche gay character ever. His sexuality plays no significant part in his role within the game and we only find out in a throwaway moment, after Joel and Ellie have said goodbye to him. Billy’s sexuality isn’t used for camp, comic effect. He’s a survivor and reminds Joel that sentimentality will get you killed, a nod to the game’s thematic conflict.

Then Joel and Ellie meet a father and son, Henry and Sam. The four of them work together, as they are heading to the same place and they start to trust each other. At one point they are just about to escape a zone held by bandits, but an ambush traps Ellie and Joel. Henry and Sam make their apologies before running away. And it’s morally questionable actions like this that give the story weight. When Joel meets Henry again, Henry says that Joel would have done the same to save Ellie, had the roles been reversed. The sentimentality or die theme comes up again.

All the characters in The Last of Us are complex. Sam wants his dad to be proud of him, but feels like he always messes up because he’s scared. Ellie admits she’s scared too, but her tough exterior means we don’t often see it.

However, it’s Joel who carries the story. He has baggage, such as a difficult relationship with his brother, which is sort of reconciled later in the game. But it’s the ending that really resonates, as Joel, the troubled father figure reveals that he isn’t really a hero. When he rescues Ellie from the Fireflies, he doesn’t do it for Ellie or for the greater good ‘ he does it for himself. The thought of losing Ellie, his second daughter, is too much to bear, so he sacrifices humanity just to keep her. And then he looks into Ellie’s eyes and lies about it.

It’s a tough ending. It’s bittersweet. You’re glad they’re together again, but wonder if the means really do justify the end. This is the most subversive thing about The Last of Us. Hollywood often eschews the morally ambiguous hero, in order to dish up a world that’s a black and white balance of good and evil. Naughty Dog doesn’t do that and tells a better story for it.

I feel that The Last of Us is a huge step in the right direction, when it comes to writing in games. We could criticise Naughty Dog for not giving Ellie more of a leading role, but I’d rather focus on the positive. We’ve been given a cast of great characters ‘ black, gay, female, male ‘ that we can really care about. That’s not something games give us very often. More stories from different perspectives are welcome, but until then just good stories will do. Naughty Dog has set the bar higher than it’s ever been, let’s hope they continue to push standards up ‘ the rest will follow.

Most played: The Last of Us