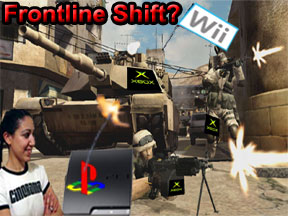 PS3 Is Back In Action

This week's big news is the PS3 price cut and the not very surprising news of a new slimmer version of the console. Forums are bristling as gamers everywhere raid their piggy banks ready to sling down their $299, â‚¬299 or Â£249. If you ask me, that's still not cheap, but then how quickly we forget that the PS3 launched in the UK at an eye-bleeding Â£425 and $599 in the US.

It's no stretch of the imagination or economics to say that the price of the PS3 has been holding it back. Then there was the problem with the games. I mean, there's always a distinct lack of quality at launch, but Sony's period lacklustre titles persisted well past decency's deadline. Microsoft also operated a pretty fierce pricing strategy, slashing the price of its low end Arcade machine to Â£129, competing directly with the Wii at Â£164.99.

For much of this race Sony has been fighting the good fight alone, in the premium price point zone. Today, that's all looking very different, as Xbox 360's Elite model retails at Â£229 with Sony snapping at its heels on Â£249.

Taking a look at the games line-ups and things are on a pretty level playing field. Okay, so 360 has Halo ODST on the horizon, but PS3 has Killzone 2, Ratchet and Clank and Final Fantasy XIII to beef up its roster. Not to mention Heavy Rain hitting the console in 2010. In 360's favour, Left 4 Dead 2 and Splinter Cell Conviction are hot exclusives, along with Mass Effect 2, which will be going up against Heavy Rain in 2010.

Sony has certainly pulled its socks up when it comes to offering killer titles, which makes the price a more pertinent point, especially in the US where it has dropped by a whopping $100. All of a sudden the Blu-ray factor and multi-media features come into play, bringing added value to the PS3 and tipping the balance for some consumers.

We can quibble about price cuts here and Blu-ray versus XBLA, but it all pales when we look at the Wii's sales figures. There's no arguing with those, as Nintendo's console continues to outstrip its rivals by about 20 million. The big N has brought a new audience to games, opening up a market of female console owners, not to mention a diverse age range of gamers.

Analysts predict that Wii owners will soon want a more sophisticated gaming experience and could start creeping onto more hardcore consoles. This means the console war has now truly begun. There's a new breed of gamer on the look out for a new gaming machine and my money is on PS3 being the more accessible brand for non-traditional gamers.

For a long time Sony had an awesome machine, but it just wasn't making sense financially. However, things have just changed. Add to this the fact that the PS3 has got its strongest line-up of games to date and we're heading straight into the crucial autumn/Christmas period and my money's on Sony cleaning up.

I guess it's time to sit back and let the battle commence.