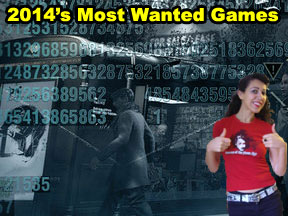 And so we begin another year in gaming. 2014 promises to be a good year – the next gen will really start to make its mark and the growth in indie gaming continues to shake things up. Far be it for me to break from editorial tradition, so read on dear play chums, for my top games to look forward to in 2014.

I think Watch Dogs is probably top of most people’s list of most anticipated for 2014, especially after the release date was pushed forward, late last year. There’s not much to same about this title, that hasn’t been said before. I just can’t wait to get hacking the city and exploring what looked like a fresh idea when the trailer first hit, but it’s been a long wait.

This is Fable, but with cooperative gameplay, what’s not to love? This is also an Xbox One exclusive that could be worth buying the console for. The Fable games always focus on fun, rather than gritty, depressing stories of apocalypses, horror and murder. And if fun with your friends isn’t enough, you can always decide to become the villain of Fable Legends and take control of the game. Typical Molyneux hyperbole withstanding ‘ this game sounds cool and a good reason to buy Xbox One.

Everyone’s Gone to the Rapture (The Chinese Room)

From the creators behind Dear Esther, Everybody’s Gone to the Rapture is a PS4 exclusive that takes us to the end of the world. Players get to play as six different people living the final moments before the world ends. This open world, story driven game is set in a Shropshire village, so don’t expect towering cityscapes. Each playthrough aims to allow you to explore new places and get a different perspective. Sign me up for the end of the world in Shropshire.

Described as a playable poem, Child of Light invites the player to wander through a hand drawn, watercolour world. It’s a coming of age story about Aurora, a little girl trying to save a lost kingdom and her father. This is real fairytale stuff, with a gorgeous Philip Glass style soundtrack, offering a plaintive atmosphere. The only thing that could let this down is the JRPG gameplay, which some people will love, but others, me included, find a bit cumbersome. However, the world invokes the likes of Shadow of the Colossus and Okami, which is all good in my book. And it’s from the creative director of FarCry 3, which is also no bad thing.

Another PS4 exclusive, The Order promises us a steampunk style Arthurian knights game. Need I really say more? The trailer looks suitably stylish, with a Victorian London setting, plus strange monsters in the fog and all manner of excitement. Expect this game in Q3 2014.

This puzzle adventure is inspired by letters written during World War I or the Great War of the title. Playing as five different characters and their canine companion, the story centres on Karl, a young, German soldier, who is trying to find his love. Play as Emile, the French prisoner of war, an American volunteer, a female medic, George the British aviator and Karl, to discover who survives and who doesn’t. The sepia-tinged, cel-shaded graphics provide a bande dessinee (French comics) feel for a game looks like the tear-jerker of 2014.

Now, when a stealth game cites its influences as David Lynch, Shadow of the Colossus, Dadaism and William Burrows, I sit up and take note. Tangiers is that game. The trailer suggests a game with an emphasis on the weird and darkly surreal. The goal is to identify and dispose of five beings, but first you need to learn how to navigate through the world and communicate with its inhabitants. Language and words are key to the game, which in itself is intriguing. The stylish German expressionist graphics offer stark black and white, city streets and sharp angles, reminiscent of Orson Welles’ The Trial, making this one to watch for me for 2014.

This atmospheric touchscreen adventure game leads players into a Japanese pop-up book. As the pages are turned, buildings fold down, letting another scene open up. The puzzles are designed to make ingenious use of the pop-up dynamic, as players move through traditional Japanese scenes, walking through tori gates on mountain tops or wooden farm houses. Instead of point and click, this is a point and touch adventure. Available on iPad initially, it should be coming to Windows, even later in the year.

Every year I put this on my most anticipated list and every year I’m disappointed. Let’s hope 2014 is the year The Last Guardian finally gets released. This is Team Ico’s spiritual successor to Shadow of the Colossus. The only footage of the game is looking quite tired now, so I’m guessing the team will have to update the graphics to get it back up to par. In development since 2007, the troubled game’s creator, Fumito Ueda did say that the game was still in the pipeline in an interview last summer. We can but hope.

While 343 industries get their teeth stuck into Halo, the game’s original developer, Bungie, is bringing us Destiny on 9 September 2014. This action-RPG first-person shooter is set 700 years in the future, at a time when the human civilisation has colonised other planets and then collapsed. Humankind is now on the brink of extinction and must recolonize territories, which involves killing the aliens. Sound a bit familiar? To counter the essence of Halos past, Bungie is promising a dynamic game world, offering multiplayer and single-player modes with MMO-style ingame events. It’s described as a “shared world” game, rather than a traditional MMO. Another one to watch for 2014.