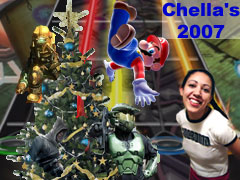 It doesn't seem that long ago that we here in England were in the midst of the wettest summer on record and now we're in the depths of a cold, crisp December. It doesn't seem fair, but hey, life isn't fair kids. But it does mean it's time for the traditional Christmas round-up, as we cast our feeble minds back to the games that have provided us with the highs and lows of 2007.

This was the year that I moved from the hustle, bustle and culture of London to the rural quiet life, surf and cider of Somerset. It was also the year I bought my first house, so on a personal level, it's one to remember, but does mean that I had to take my eye off the gaming ball for a good few months. This aside, there have been a few corkers over the last 12 months – well, it keeps us off the streets.

I suppose the year really kicked off with the launch of Lord of the Rings Online. This was one that had the uber geeks foaming at the mouth with anticipation and I have to say they'd be churlish to have been disappointed. Tolkien's master universe was lovingly recreated and Peter Jackson was nowhere to be seen.

It didn't exactly rock WoW from its perch as king of the MMOGS, but it had a darned good go and is still serving up platters of high fantasy goodness for those that like their games with a side order of elves and a soupcon of Halfling.

Bioshock is the game everyone loved this year. I haven't heard a bad word uttered about it, in fact most people praise it so highly it's become a life-changing experience. It delivered an engaging story and gameplay in one jaw-dropping package and that's not something we gamers see everyday. Who can blame us for singing from the rooftops when developers get it as right as they did with Bioshock.

A look back at 2007 wouldn't be complete without saying the H word. Like Atlas, Halo 3 lumbered towards with the weight of the world's expectation on its shoulders. The hype was the biggest we've ever seen, but thankfully Bungie delivered in spades. I have to say it was the highlight of my year, much as I thought it would be.

News today reveals that I'm in good company, as I hail 2007 as Halo's year. A survey of independent retailers by MCV, the UK's leading trade magazine, puts the launch of Halo 3 as the highlight of their year. That's no mean feat for a game that had a lot to live up to. The Master Chief was up against the likes of Bioshock and he fared well, but I think he'll have to do something very special next time to really have gamers slavering like they once did.

Taking a break from all the mauling, murder and mayhem, Mario flew onto our screens in a flurry of stardust and twinkly Nintendo sound effects. At last Wii owners had something to smile about and in fact it would be a smile fit to last them through to at least the second half of this century.

Let's face it, Mario hasn't quite been the same since Mario 64, but Mario Galaxy has brought back the magic. It's silly, surreal and a completely mind-melding experience, but executed with such confidence and style, all wrapped up in oodles and oodles of fun. You'd have to be completely soulless or just plain contrary for the sake of it, not to have enjoyed this one. Alternatively, you could just be living in the UK, where the Wii is about as common as a unicorn's horn. Manage to get your hands on one and you'll probably make the evening news.

But that's enough flying in the stars and bouncing on daisies; it's time to start some 13th century style killing. I can only be talking about this year's or possibly the most hyped game in history of hyped games. Ubisoft went all Jedi mind-trick when it came to the ad campaign for this one. I am of course referring to Assassin's Creed and in the UK at least, the advert didn't have any overblown voiceover, just images of the game and Massive Attack's hypnotic Teardrop playing over the top, saying all it needed to say to make you want it.

So the whole world bought it and we all gaped with wonder at the rooftops of old Jerusalem and Damascus. Then we scaled walls, leapt over carpet sellers and flung ourselves from one building to another. Unfortunately, we also scaled an endless number of towers, pushed beggars and inched our way past guards on horseback before finally doing some assassinating. Nothing could have lived up to this amount of hype, but AC certainly gets my award for best new IP this year. Good on Ubi for giving us a new character and universe to explore and I for one am looking forward to number two – come on, we all know it's coming.

With all these games said and done, 2007 can really be summed up as the year that rocked. Yes, with less than a month left of this year, everyone's limbering up their rock posturing and back-combing their hair in preparation for Christmas showdowns. Not one, but two rock-based games are helping us see the year out with enough gaming pyrotechnics to rival a Meatloaf concert.

Guitar Hero III is giving us more of the same, but with more tricked out rock indulgence than ever before. But just when we thought we'd sold our soul to Steve Vai, Harmonix delivered Rock Band. Forget fighting over one measly guitar controller, instead start advertising in Melody Maker and get your band together. "Vocalist and drummer wanted: influences, Guitar Hero I – III and Metallica."

The year began with Tolkien and pottering about in Hobbiton and ended with Queens of the Stone Age – no better way to end in my opinion.