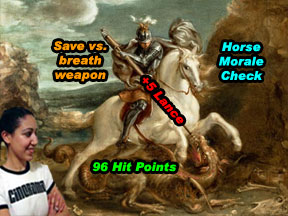 Role-playing games (RPG) have been part of the games industry since its very beginning, but there are signs that the RPG may be falling out of favour with developers and publishers. Titles like Mass Effect 2 and the still-to-be-released Fable III are moving away from traditional RPG conventions to bring us the new breed of hybrid game. The lines between genres are blurring and the RPG as we know it could be going the way of the point-and-click.

RPGs allow the player to assume the role of characters in a fictional setting, acting out these roles within the narrative of the game. This takes the form of structured decisions and character development. Of course the RPG came from our old friend pencil-and-paper gaming, which involves sitting around a table with a Games Master (GM) setting the scene and steering the players’ paths through the story.

I for one, still have weekly RP sessions, in a local pub with friends, so the digital age hasn’t killed of the legacy left by Gary Gygax (co-creator of Dungeons and Dragons) and his peers.

We all know that the RPG made the leap from paper to electronic media with the nimbleness of a gazelle. The first games were text-based adventures and MUDs still exist today, for those diehard fans. However, from Dragon Quest, to Zelda, through to Final Fantasy and beyond, the RPG has become a cornerstone of games development. Many of the tropes we love and hate about games come from the structure of those original pencil-and-paper days.

If you think about it, the RPG has had a stranglehold (and I mean that in the nicest possible way), over the games industry since day one. Levelling up, dropped items, treasure chests, end of level bosses, upgrades, hit points and magic points – sounding familiar? We’ve all got the likes of D and D to thank for that little lot. In fact, all of these gameplay conventions are still with us today and developers are constantly scratching their heads to try and find ways to move away from them.

Fortunately, the likes of Mass Effect and Fallout have not sacrificed character and narrative, in favour of guns and action. In addition, the sense of scope garnered by the new wave of openworld games means RPGs have been given a new lease of life. There is less of the linear storytelling dished about by Japanese RPGs and more of the gleeful side quests and sandbox gameplay.

Interestingly, a recent interview with Peter Molyneux, discussing the finer points of the forthcoming Fable III with Edge magazine, reveals that he is also looking for something beyond the traditional RPG.

While explaining the structure of the game he says, "We’ve tried to move Fable away from being a roleplaying game. There are some things I love about roleplaying games: the progression, the feeling it’s you in the game, rather than some canned hero. I love levelling up, but hate that it’s all about changing the number four to five, to six."

Apparently this disregard for micro-management is exactly what came from player feedback of Fable II. Many didn’t understand how to spend their experience points and didn’t enjoy that element of the game. And as a result, Fable III is following in the footsteps of Mass Effect 2. Gone are the experience points tables and instead levelling is a seamless, visual aspect of the game. For instance, weapons become more powerful the more you use them and this is automatically reflected in the way that they look.

In a way GTA heralded the beginning of the new RPG. It’s all about character progression, but without any of the spreadsheets and assigning of points. Playing Red Dead Revolver, I also gain the feeling of an RPG without any of the work. However, as a pencil-and-paper RPGer, I do like to have my character sheet and see my stats increase, as I work towards a new career. A lot of what I do in RDR has no point. I earn money here and there, but there’s nothing to spend it on and if my horse dies, I can whistle and another one comes galloping up as if nothing’s happened.

In some ways, doing away with the traditional elements of the RPG will help us get more involved in the world and the character, which is surely the point of role-playing. But these conventions have been with us for so long, that it’s easy to confuse stats and levelling with the true heart of what role-playing is all about. Whereas the character sheet was a means to an end for a bunch of people sitting around a table rolling dice, it should be only the beginning for a videogame and it looks like we may be finally taking the stabilisers off and entering a new era of RPGs.

Whilst it’s exciting to look forward, it’s still nice to remember where we’ve come from, so I’ll be sitting round that pub table on Monday and hoping the dice are favourable.