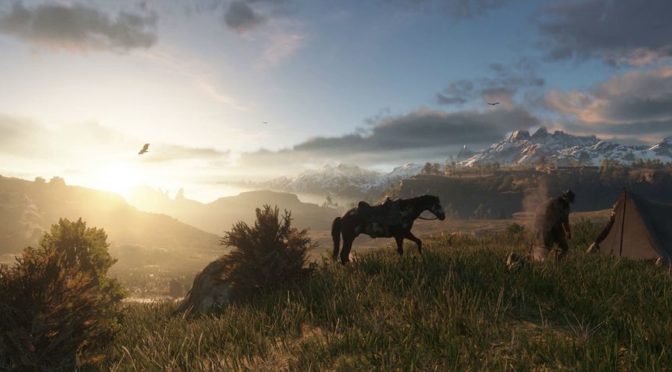 You may have noticed that Rockstar dropped a new Red Dead Redemption 2 trailer because the internet went rabid for a while.  As trailers go, it was pretty meaty – we get a protagonist, hints at the scale of the world and even a possible train robbery scene.

Here’s what I gleaned from the Red Dead Redemption 2 trailer:

The trailer confirms what we all suspected, that Red Dead Redemption 2 is set before the events of the previous game. It makes sense because RDR took place at the very end of the wild west era, so a sequel wouldn’t have been a cowboy game. The biggest timeline clue is the appearance of  Dutch Van Der Lynde. He’s the main antagonist from the previous game and (spoilers) he dies, but it appears that we get to see Dutch the early years for this prequel.

Our lead character is Arthur Morgan and he’s a menacing money collecting thug, who works for Dutch. We see him hassling a man who’s mother is literally kneeling at her dead husband’s freshly dug grave, still in her mourning habit. Morgan is presented as a nasty piece of work, which is a departure from John Marston in Read Dead Redemption. However, Rockstar has a strong history with anti-heroes, if we look at the Grand Theft Auto series, especially GTA V. 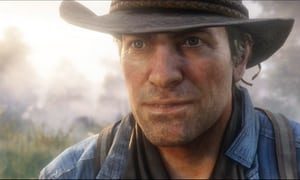 This brings me neatly on to the woman featured in the trailer. RDR had Bonnie McFarlane and it looks like one of the gang is a feisty woman, who can give as good as she gets. In this context, that means pinning someone’s hand to the bar top, using her trusty knife. Internet speculation suggests she could be one of several playable characters, if Red Dead Redemption 2 goes down the GTA V route, which had three playable protagonists. 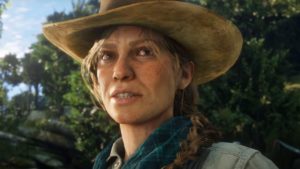 Rockstar has come under some criticism for its portrayal of women and it has never had a female protagonist. Have a playable female character who isn’t a prostitute would be two steps forward for Rockstar.

One of the most exciting moments of the trailer, was the hint of a train robbery.  Nothing quite says wild west like 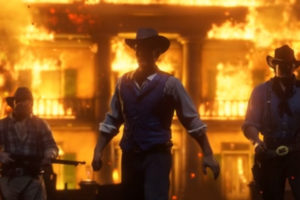 drawing your horse alongside a train (that symbol of modernity tearing through the cowboy’s realm) jumping on board and stealing some gold. Once again, we can glean clues from GTA V here, as Rockstar proved they can handle a heist caper with more than one playable character. So, it stands to reason that we could expect the same kind of gameplay in Red Dead Redemption 2.

Into the Great Wide Open

The range of different landscapes and fauna, suggest that Red Dead Redemption 2 is bigger than its predecessor. We’re treated to snow-capped mountains, suggesting something akin to the Rockies. Then we’re in golden corn fields and finally, steaming swamps with a plantation house as backdrop. I’m thinking it could be Virginia, perhaps, or maybe further south. Either way, the map is probably going to be big, leaving plenty of room for sightseeing by horseback.

The lack of buffalo was a great sadness for me in RDR, not only did it signify the annihilation of the indigenous people, but also the slaughter of these iconic animals. Thankfully, the trailer reveals that there are buffalo. Bears and alligators were also present, so I’m looking forward to a bustling countryside.

Unfortunately, Morgan has a bow and arrow, because we can’t have 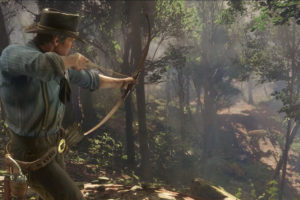 an openworld game without a bit of archery, apparently.  Anyway, it’s unclear whether the bow is just another weapon option for stealth kills or whether there’s an annoying hunt and collect the pelts side quest scenario.

This seems to be something that the internet is very excited about – the trailer shows dual-wield pistols. Yes, it looks like you might be able to use two guns at once. If that’s your thing, then you’re in luck. For the rest of us, shrug and move on.

Where is John Marston?

Lots of people want to be able to play as John again. I don’t. I feel like his story was perfect and I don’t need to go back to know more. That said, we know that John did run with Dutch’s gang and decided to mend his ways when a robbery went wrong and he was left for dead. This either places the game before John joined or after he left, which is more likely. Either way, it leaves the story open to have an appearance from John. I’m hoping he won’t be playable, but just gets a cameo or something.

In case you missed the trailer, check it out here:

Red Dead Redemption 2 is set for release in Spring 2018 on PS4 and Xbox One.