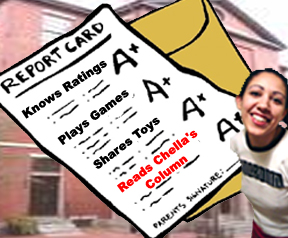 Well there's been some good news in the world of gaming this week: 74 percent of parents believe that games are educational. That's video games, not Scrabble, just in case you were wondering. This is according to Microsoft's second annual ‘Play Smart, Play Safe' survey of UK parents' and children's views of gaming. Unsurprisingly, kids are savvier than their parents when it comes to games, but maybe it's time for some parent gaming evenings.

When it comes to keeping the kids occupied, parents are quite prepared to take them to a theme park or to see the latest summer blockbuster; they'll even endure bowling and the occasional burying at the beach. But when it comes to gaming, adults will fork out for pricey games machines and then have nothing more to do with the experience.

Microsoft's survey seems to suggest that kids want parents to pick up the pad now and then and get their hands dirty. Come on parents, get to grips with the pad, limber up your thumbs and find out what the A button's for.

So 94 percent of UK parents feel responsible for checking the age rating of the games that their children play, but only 73 percent are aware of parental controls on games consoles, including age and content ratings on actual games. This is an increase on last year's study where only 60 percent were well informed, but it still means a third of parents don't have a clue.

On the other hand 96 percent of kids are aware of gaming controls, while 92 percent are aware of age rating systems, compared to just 60 percent of parents. It seems kids would rather turn to each other for information on games and safe gaming (73%), while only 23 percent would turn to a parent for any pearls of gaming wisdom.

Maybe they hand-picked the kids with the world's uncoolest parents or maybe people stop gaming once they have offspring. Microsoft hasn't revealed how many people were surveyed, so we can never be sure, but I'm betting most parents could spend a little more time gaming with their kids.

That said, I'm not sure how parents manage to go through life not realising that games have age ratings. Do they look at the covers? If they understand movie ratings, then you'd think perhaps they could apply that knowledge to games. I'm thinking they probably keep a wide berth of the whole affair and just close their ears to the screams and gunfire, hoping that it's just the latest version of Pac-man.

Come on parents, your kids obviously want your input, so switch off Desperate Housewives and have a go at some Street Fighter IV. And after 30 minutes of play, let's see how suitable GTA looks now – hmm, yes, I thought so.