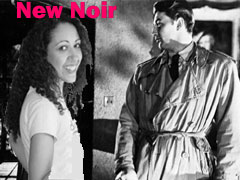 This week I discovered that imagination and innovation are not dead. Last month I joined a corps of beta testers for a new game called Gumshoe Online. I thought I'd see what the whole process was all about and stick my nose in where it was wanted for once. The whole thing sounded very intriguing so I signed up without hesitation.

Imagine if you will, a smoke filled office with sunlight casting long thin shadows from the Venetian blind. A hat and overcoat dangling from the coat rack and a desk littered with files. Everything except Humphrey Bogart and a femme fatale is present in this scene – the ultimate in film noir detective stories. This is what Gumshoe Online promised and I was ready to welcome it to the gaming fold.

The classic detective story is something that has been overlooked by games. Rather like the western, an oversight that has been rectified by Red Dead Revolver, I haven't seen a detective story of note since Sam and Max. And a darned good detective story it was too, as spoof noirs go. But I think we're all crying out for something of Philip Marlow proportions. We want to slip into the shoes of Bogey and have a bit of a sort like Lauren Bacall tutor us on the finer points of whistling.

Gumshoes Online puts you in the size nines of a private detective in 1930's America. Your job is to solve the cases that come your way by hitting the streets and talking to people, solving puzzles and scouring different areas for clues and evidence. The game is browser based so there's no downloading to be done and you can play on any PC, whenever the need to sleuth commands.

Testing began last week and the team have only provided us beta testers with a mini mystery (a test game, if you will) to allow us to report bugs and problems. The player's base is the detective's office, complete with all the detailing of a thirties private investigator. It was missing a glass of whisky on the desk though. An in-tray contains a file with all the possible cases to investigate. In this instance there was only one involving an empty house, some clues and a safe.

Although, the game is only in its early stages, there is a lot of potential here. The developers, Hidden Buffalo, intend to create an online community of sleuths. They will be able to chat with each other and discuss cases, but ultimately they will be competing to become top detective.

I have just completed the test case and from what I can glean from my brief sojourn with Gumshoe, it presents a relaxed approach to gaming. There is a time limit for each case, but the way the game works allows you to dip in and out as you see fit. There's no need to save, just turn out the light in your office when you want to quit the game.

Hidden Buffalo are also asking for people to contact them with their very own detective stories. It's a hotbed of detective action I tell you and very nice to see. The forum is currently buzzing with testers who have enjoyed the game and who are keen to get solving mysteries. The test game only scratches the surface as far as I can tell. There are hints of different detective agencies being dotted around the cities and bars and loads more characters to interact with.

This could be a very exciting prospect for online gaming. No building up of characters and being scared that you'll get killed and all your grand wizard experience points will be lost. It's just instant satisfaction from some online point and click gaming and we all know how I like those. I knew I was in good company when one of the Hidden Buffalo team asked the forum about their favourite adventure games and a fair few said Broken Sword and Beneath a Steel Sky.

Maybe Gumshoe will be the start of a raft of quality detective titles. Notice how I emphasise the word quality. Anything less than quality is just not acceptable. If you're going to churn out schlock please stick to space monster adventures, post apocalyptic clichÃ©s and variations on the haunted house theme. Now that Rock Star has tackled the Sergio Leone inspired western, maybe it's time they turn their hand to film noir. A team with their lightness of touch could really pull it off.

Meanwhile, now that I've whet your appetite, I shall keep you posted on developments at Gumshoe Online. Turn up the collar on your overcoat folks and practice sticking a cigarette to your bottom lip, sorry can't help you on the Lauren Bacall front, but here's to a new era of detective games.