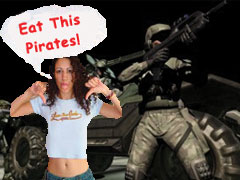 There's good news and there's bad news. You probably know the bad news already, unless you've been hiding under a rock somewhere, or institutionalised without TV privileges.

The bad news is that last Friday an illegal copy of Halo 2 was released onto the Internet. As I write this sentence, news has just come in that GTA San Andreas has also been leaked – one of the most closely guarded and highly anticipated games of the year. Rockstar has done an amazing job of keeping its cards close to its chest, raising anticipation to fever pitch and it just goes to show that nobody is immune to determined pirates.

But back to the Halo 2 story, which has to be the saddest news we've had to stomach most recently. That said my heart was lightened by the outrage the gaming community has expressed on various forums I've visited. Just in case you have been hiding under a rock, let me tell you the story so far.

Last Thursday night a PAL version of Halo 2, complete with French dialogue, was leaked onto the net. Both Bungie and Microsoft were quick to make no holds barred, we know where you live style statements. The gold disc is being distributed through file sharing networks and news groups. Fortunately, it is only playable on chipped machines and won't work on Live, which is a major part of the game this time around.

A Bungie employee headed onto the studio's community forum and blasted the thief, saying it was "almost positively the work of some jerk in the manufacturing plant who pocketed the game." Well said that person.

The forum has been a powerful tool for Bungie, allowing the studio to appeal to its fans. Bungie actively called the community to action in its "Underground Army," asking them to forward any information they had on the leak of the game. So websites and anyone handing the game around to mates, beware because you could be dealing with a member of Bungie's Underground Army. I wonder if they get badges and a little pack with a magnifying glass and a deer-stalker hat!?

Anyone foolish enough to post spoilers or links has been threatened with a permanent ban from the Bungie community forum – that's seriously ostracised. And don't forget Microsoft has also got your number and can lock out any culprits trying to play Halo 2 on Live.

A full scale investigation has kicked into overdrive and "the jerks" should be running scared if they have any sense. But then I guess if they had any sense they wouldn't have stolen Halo 2. I mean it's Halo 2. Did they think nobody would notice. It's like art thieves who steal stuff like The Scream or the Mona Lisa. Everybody knows that painting. Do you really think you can sell it down at The Dog and Duck?

I don't know about you, but I certainly wouldn't want the wrath of Microsoft crashing down upon me. This is the most important title for the Xbox and Microsoft has made it clear that it considers the leak theft and anyone caught will be dealt with accordingly. This is one of those rare moments when everyone is behind Microsoft 100 percent and cheering them on to use their corporate might to crush the cretins.

The whole thing just "really sucks," as the Bungie team said on their forum so eloquently. Some little spoil sport just couldn't leave it could they. There's always one who has to have it before everyone else. I'm just glad it was the French version because how annoying could that be!? That's enough to stop most of the UK and the US from even giving it any consideration, but there are always those who will give in to the dark side.

The Halo 2 leak follows on from the Doom 3 leak earlier this summer and now with news of San Andreas falling foul of pirates the industry needs to take a serious look at its security measures. I thought Rockstar were the last bastion of well-kept secrets, but no, it seems nobody is safe.

This kind of stuff just really gets my goat because it's just so effing pointless and annoying. Why can't people just wait for crap's sake. We've been waiting two years, so what difference is one month going make? But of course there are always the people who are going to bleat on about games being too expensive and they can't afford all the ones they want and until then they're just going to STEAL them.

Er…I'm sorry, but if you can't afford them, then don't play them. Games aren't a humanitarian right. It's not like liberty or fresh running water – they aren't essential to life. I can't afford a Ferrari, but that doesn't mean I'll buy a hooky one off a bloke down at the pub. Get some self control people and wake up to the fact that the world doesn't owe you a break in the shape of cheaper gaming.

Oh, and the good news is that Microsoft has announced that pre-orders for Halo 2 have passed 1.5 million in the States alone. This means Master Chief will be breaking videogame records and guaranteeing day one revenues higher than any movie in history.

So in your face videogame pirates!