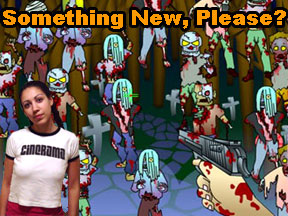 Scanning the games releases over the last couple of weeks and I’ve been struck by the fact that we seem to be regurgitating three ideas over and over and over again. Okay, so we’ve always done that to some extent, but this month it’s been more noticeable than most, or maybe my spam filter is on some weird setting.

Either way, here they are…

I’ve seen enough "Yanks" in those helmets with the little nets on and a packet of fags stuck in the side, traipsing through one identikit bombed European city after another, to last a lifetime. Cue tank through the streets of Prague or fighting our way up some muddy hill. That’s World War II – done to death, if you’ll excuse the rather distasteful pun.

Next, we swap a scene painted in shades of grey and brown for a sun-bleached vista. Everything is rendered in palette of pale yellow and camel brown. Oh yes, this must be the updated war scenario. Cue stark, gritty combat in the Middle East. The enemy are in turbans, no uniforms required.

There are men screaming in pain or shouting commands to each other and there’s lots of mock shaky hand cam and dirt thrown at the screen. It’s all very brutal, but it doesn’t really make us sit back and gasp at the inhumanity of war. In fact it doesn’t make us think, it just makes us go, "woah, that was cool."

There’s war on the news every day and I just don’t feel the need to engage in it as entertainment. I seem to be the lone voice in the wilderness though. I don’t mind shooting guns or a visceral combat situation, but why can’t it be a blunderbuss now and again?

As far as I’m concerned, Red Dead Redemption was redeeming in more ways than one.

Just in case it’s been a while and you’re in the mood for a bit of war.

Okay, moving on to the next genre that’s overdone. We have the famous Kill the aliens (also see Space Marine)

Remember Space Invaders? Well, that was a very long time ago and we don’t seem to have moved on a whole lot. There’s nothing that gets us gamers more steamed up it seems than a bout of mass genocide. As long as the blood is green, or these days that luminous stuff a la Predator, we’re gun crazy. In fact, see my entry on ‘War’ and maybe the blood doesn’t even have to be green.

If gamers didn’t have aliens to kill, what the hell would we do with ourselves on a Friday night?

Heck, its Friday night right now! Don’t just sit there twiddling your thumbs, get to killing some aliens. They won’t kill themselves you know!

And now we have the once new, now overdone genre of…Zombies

I love me a good zombie movie. Heck I’ve even spent hours of my life bludgeoning them with a crowbar and shooting them in the face with a shotgun. (Whoever invented the shotgun didn’t know how handy that thing would be come the zombie apocalypse.)

The only problem is that I’ve been shooting and pummeling zombies (and they all make the same dry, but squishy sound when you kick them) for more years than I care to count. But it doesn’t seem to be quelling their numbers. In fact it’s getting worse. The more zombies I kill, the more games come out offering me oceans of undead brain-noshers to eviscerate.

Not content to release stand alone zombie games, we now get zombie DLC for games that have nothing to do with zombies. RDR I’m looking at you and that’s not the only one. There are Nazi zombies, 50s zombies. In fact all we need is a WWII alien zombie and we’ve got ourselves the next blockbuster game!

Enough with the zombies!

One look at today’s big game releases and it’s fair to say that we’re in a very angry place right now. Maybe it’s the banking crisis or the fact that our governments’ just aren’t passing muster at the moment. We’re feeling a lack of control over the things that really matter and we must vent. We must kill stuff.

So when I’ve finished riding the desert plains in Red Dead Redemption, I’ll be looking forward to Fable III and the new Assassin’s Creed. Not an alien, zombie or any war mongering to be seen. Relief – at last!