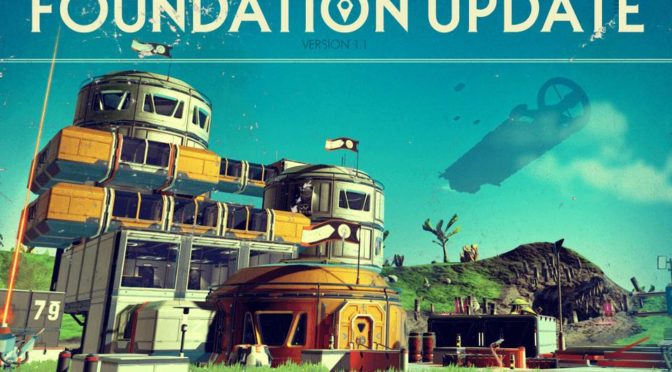 It’s weird revisiting No Man’s Sky, after all this time. I haven’t played it for a good few months, but the No Man’s Sky Foundation update brought me back and it was a happy moment when the soothing music played and the beautiful vistas filled my screen. I wasn’t among the masses foaming at the mouth when it was released this summer. I also wasn’t totally satisfied by the game Hello Games delivered. However, I didn’t expect a space MMO, so the loneliness of No Man’s Sky was no surprise, but the lack of things to do did eventually take its toll on me. Eventually, I moved on to other games with story and suspense and onesthat don’t require major blocks of time in one sitting. Although, now I’m back I remember what I’ve been missing – the calm solitude.

My contentment at launch isn’t meant to ignore the fact that many people were bitterly disappointed by the lack of everything they expected. The reaction of some may have tipped the scales into Trump-style cries of lies and villainy, aimed at Hello Games, but that doesn’t change the fact that something was lost in translation.

In response to the frenzied rage, Hello Games just tucked itself into its developer shell and remained silent on the whole thing. I suspect the office mantra for the last few months has been – never complain, never explain. Instead, Hello Games has simply delivered No Man’s Sky Foundation as an answer to the er…feedback. And this first update does answer many of the criticisms angled at the game at launch.

First, it’s worth explaining that No Man’s Sky is still not a space MMO. In fact, I suspect it will never be a space MMO – I just don’t think that’s what they’re going for. Now that’s straight, let’s just move on.

The main news from Foundation is the base-building feature. Now players can have real, long-lasting impact on the universe in the shape of pods and  Frank Loyd Wright style architecture.

The construction tool box is effortlessly simple to use. Simply point and click to clip together building elements, such as corridors, round rooms and then add elements such as windows and ladders to upper storeys. The building elements are limited, so don’t expect guild hall-style extravagance, such as wall hangings, chandeliers and feasting tables to fill your base. It’s all very functional, with a Star Trek kind of aesthetic.

One of the biggest benefits of the base-building is the ability to recruit aliens to help out around the house. By installing interfaces for construction, weapons and different specialities, you can then go to space stations to advertise a vacancy. Talk to aliens and they’ll offer to work in your base, if you have the right facilities. Then next time you pop home, they will be there beavering away.

Once you’ve installed an alien, they generate quests for you, often giving you more reason to explore the universe and other star systems. Thankfully, the update includes a teleporter, which lets you quick travel back from space stations. But the real joy is having some company and feeling like space isn’t quite so cold and lonely. We lifeforms have got to stick together.

If the thought of returning to No Man’s Sky fills you with dread, but you’d like to have a go at building a base, then Hello Games have got your back. The Foundation update comes with three modes. In Normal mode, you can return to your last save game and pick up where you left off. I tried this and quickly found I’d forgotten everything, such as which mineral is important and god I need more inventory slots.

Once you’ve acclimatised to the game again, simply do a quick scan from space to find an abandoned building. Then you can land, go inside, claim it as your base and start designing your space pad.

Survival mode makes things a lot tougher. Creatures are harder, planets are more hostile and resources are in short supply. If you like a challenge, then try bustling from cave to cave, just to keep your life support levels up long enough to make it to your ship. Then you find you haven’t got enough zinc to make a warp drive and get off this rock. Best start mining, but not too much, otherwise the drones will attack and kill you. If you want to know what it’s really like to live on an alien world, this is the mode for you.

If all you want to do is be a space architect, then jump into Creative mode.  Building is free and all elements are available to you. When you land you have a fully functioning ship and a base to use as a starting point for your building. There are no worries here, but there’s also not much purpose. With no limiting factors it all feels a bit hollow, unless you really love house building. Even then, the limitations of the current kit, mean it may get old fast. I suspect new building elements will be some of the first things No Man’s Sky will charge for. Even though Hello games initially said all updates will be free, Sony quickly had them temper that claim.

Apart from the building, No Man’s Sky Foundation offers a number of minor updates. Terrain is more varied now and players are more likely to come across tropical worlds with signs of life. However, resources are harder to come by, with some minerals needing a higher level of mining beam. In addition, plutonium is no longer scattered about in towering shards of scarlet , so the scanner becomes more useful than ever.

The alien races each specialise in skills such as farming, construction and weapons. They provide crafting quests, which unlock items, such as the advanced mining laser, which then means you can build different items.

If you don’t want to settle down on a nice planet farming resources, then create a base in space. Freighters can be commandeered, so you can have a mobile lab or workshop populated by alien craftspeople. This makes it easier to explore new star systems without having to travel back to a planet light years away. And your original base can be dismantled, if you decide to become a spacer.

No Man’s Sky Foundation  rights many of the wrongs people felt at launch. There is more to do and the base-building opens up new avenues for quests. Players can feel like they actually make a difference to the world by adding save points, beacons, building a base and recruiting aliens. However, those aliens still never leave the base and just stand there until you walk in to see if they have a quest.

Many will argue that No Man’s Sky should have launched with these features in the first place and that may be so, but it didn’t and now, five months on we’ve got an update giving us more stuff to do. It may still be a long way from the game that some people imagined, but this update definitely offers more things for more people, allowing you to be distracted if you want to be. No Man’s Sky Foundation is a great start for a game I expect to grow and change subtly over numerous updates. And fundamentally, it’s still a meditative, gorgeous, empty experience, but in all the right ways.