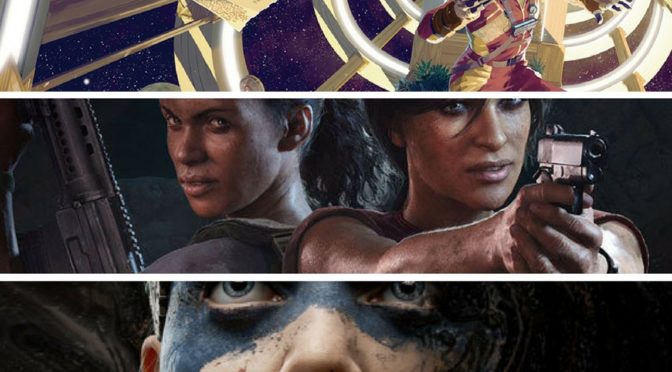 August is usually the time we all go on holiday or catch up on the bag log of games that have dropped earlier in the year. 2017 is doing things differently and launching one must play title after the other.  As I write Hello Games has released a new update for New Man’s Sky, which only adds to the slew of games. If you’ve been caught napping, have no fear because here are the must play August games of 2017.

Fullbright, the studio behind seminal narrative exploration game, Gone Home, kicked off the August games season with Tacoma. This follow up to its debut takes the narrative adventure to a space station with a missing crew – so far so Gone Home in space. However, it adds more audio dialogue and a rewind mechanic to add new layers to the narrative design. With Tacoma, Fullbright builds on the things it did well in Gone Home and brings something new.

Ninja Theory’s long-awaited historical, Celtic, psychological hack and slash Hellblade: Senua’s Sacrifice is finally here. Hellblade attempts to explore Senua’s struggle with psychosis and wraps it in a story based in Celtic and Norse mythology, complete with descent into the underworld. Oh and it looks gorgeous, in a covered in wode, dark and scary way.

Chloe and Nadine team up for a brand new adventure set in the Uncharted universe. Nate isn’t making an appearance in The Lost Legacy, but these two ladies have enough fire and personality to make up for it. Great to have a female duo and so exciting to get back into Uncharted.

Ubisoft and Nintendo team up for this bizarre team up of classic characters in Mario + Rabbids. It looks fun and by all accounts the tactics are deep enough to make this a game with wide appeal. A welcome addition for Switch owners.

Life is Strange: Before the Storm (31 Aug) PS4/Xbox One/PC

It’s the sequel we didn’t know we needed from Dontnod. Life is Strange was indie film meets games and we loved it. This game goes back to tell the story of Chloe. It all takes place before Max gets her power and the tornado ruins days at the beach. Let’s hope it’s a story worth playing.

It’s one year since Hello  Games released No Man’s Sky to consternation, joy and vitriolic disappointment. There have been updates before, but Atlas Rising is the most significant yet. I haven’t had a chance to play, because I’ve literally just heard the news. Atlas Rising introduces rudimentary multi-player, where other players appear as orbs, so it’s a less lonely universe. However, player interaction is limited. Expect the usual new aliens, ships and stuff, but there is also 30 hours of story, so lots of new shiny. Will it entice anyone back or only the die hard Skyers?

I can’t believe this cracking list of games is for August. August people! It’s also a great month for female protagonists, with four out of the six featuring women lead characters.  I say this a lot lately, but it really is a good time to be a gamer.