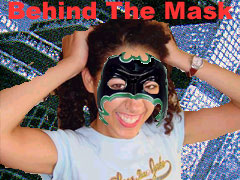 As you, my most faithful of readers, will know I have recently entered the world of the MMOG. And what a rich, enjoyable experience it has been so far. One might say I'm converted, almost to the point of evangelism, but that's another story.

I've entered wholeheartedly into this new universe; making friends, chatting with strangers, forming teams and all the usual shenanigans. Whatever time of day or however often I play, one thing always crops up that puzzles me somewhat.

The virtual world is a very interesting thing indeed. Here we are a bunch of strangers thrown together by a unifying interest in games and having fun. MMOGs create an alternative universe where you can be what you want, act how you want and leave behind the constraints and taboos of the ‘real' world. Well, so I thought.

It seems the gender issue is one that persists, even in the virtual world.

You may remember my column a couple of weeks back, describing the creation of my character on City of Heroes. My avatar is female – a fact I later discovered is quite typical of female gamers (more on that later). I dressed her in suitable super hero attire and skipped off merrily into Paragon City.

There I was cloaked in luxurious anonymity. Nobody knew who I was; my age, weight, race, mental stability were a mystery to all I met. And it puzzled me gamers. It puzzled me that male characters would storm right up to me, give me the once over and say "hi" in an I-think-I'm-in-here kind of a way. "Nice costume" they'd say. Now, if they could have followed it with a Sid James style laugh I'm sure they would – let's be thankful for the current shortcomings of the MMOG.

Another scenario would be me playing in a team. We're engaging in the type of witty banter you only get online. All of a sudden a lewd comment is thrown my way regarding the quality of one or other of my character's physical attributes. I ignore said comment or laugh or something. And before I know it another male character's stepped in with a comment of his own. Then they're engaging in friendly competition for my attentions. I think it's when one of them told me to "get back in the kitchen" when I said I wasn't up for grabs that I really baulked.

For all this chump knew I was an 18 stone biker with a braid in his waist length beard and a bolt through his nose. And it really puzzles me that they don't realise this. Does it not perturb them that the ‘girl' they're chatting up who suddenly says ‘AFK for a sec' could actually be stopping to reach into his boxers and give his knackers a good scratch?

Then there's the gamer who insists on asking for your age, sex, location (ASL). I normally decline to disclose such information. At the end of the day I'm playing a ROLE PLAYING GAME!! That means I get to play a role in some way divorced from my real world role. That means I don't want you whispering l33t speak nothings in my ear. One player insisted that unless he (I'm assuming he just because of the stupidity) knew if I was a male or female gamer he wouldn't know how to refer to me in the third person.

Idiot boy: well how should I refer to you then, he or she?

Me: Well, if you'll notice my character's female so refer to me as she.

Idiot boy: But that means if you're a boy in real life I'm calling you ‘she.'

Me: Well if I'm cool with it, then that's my problem.

I mean, for goodness sakes people! Maybe he didn't want to crack onto me or maybe he doesn't like swearing in front of women. Whatever the motivation, he needs to get over it. Having given this issue some thought the only conclusion I can draw is that these players tend to be young teenage boys.

Here are some more figures so that all you MMOG players can take note and remember the next time you think any female characters are fair cop for your lascivious attentions.

EverQuest has been used by Nick as a test case and he reveals that 50 percent of EQ players gender bend and around 48 percent of female characters are male. Using the EQ case, Nick suggests that around one out of every two or three female characters is being played by a male. So think twice before dusting off all your best chat up lines.

I'm a firsthand witness of a bloke getting hit on because he has a female avatar. Konami Boy has two female characters and one in particular seems to be a hit with the boys. Of course it causes me no end of amusement and hopefully provides him with an insight on what we girls have to put up with in and out of the gaming world.

And it still puzzles me dear play chums. These characters are a fiction. They don't even look real, but male players still seem to objectify the female characters. Maybe there are female gamers roaming CoH with the raging horn, cooing and swooning over male characters. Somehow I find it hard to believe simply because they're not real. Yeah, some of them look cool as and you have to run back and take a second look, but that's all because god knows who's pulling the strings of this virtual puppet.

Sometimes "nice costume" is just a compliment and it's a shame that the actions of a few gamers make you wary. All it takes is one arse in a team to change the atmosphere through a vaguely sexist comment. Before you know it the testosterone levels go sky high and you look around to see you're the only female character. A moment before that hadn't mattered, but some cretin had to bring the veil of illusion crashing down around our ears.

The only thing I take comfort in is I can still always tell them I'm a bloke just to spoil their tea party.

Maybe next time I'll try out a male avatar and get back to you on how that feels.

You can check out the wealth of gaming statistics and research from the Daedalus project at www.nickyee.com.

Most played: City of Heroes
Most wanted: Lego Star Wars