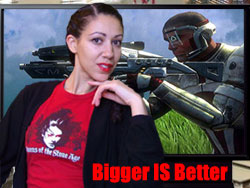 Well, I've given in dear play chums. I've gone and joined the 21st century. Last weekend I bought my first plasma TV. Why has it taken me this long? Well, my liberal guilt forced me to hang onto my old television in a bid to swim against rampant consumerism for its own sake and go some way to alleviate the pressures it puts on our planet. Of course all these highfalutin ideas went out of the window when I bought Mass Effect and with them went a large chunk of my savings. Oh well, that's what savings are for right?

Rather late in the day, I decided to give Mass Effect a go and all was good until I tried to read any of the on-screen text. Just about to enter my first fight and a text hint jumps up on screen. It could have been a Chinese proverb for all the good it did me, as try as I might, I couldn't read the damn thing. Squinting didn't work; neither did moving closer.

There was only one way to solve my problem of lousy sound and inferior picture quality and it lay in the purchase of a new television. I had to bite the bullet and take the leap into HD. Fortunately, I could ease my conscience by telling myself that flat screens consume less energy than cathode rays, which was enough to get me browsing the internet to consider my options. All I knew for certain was that I couldn't continue gaming under these conditions.

Of course there were a few days of dithering over LCD versus plasma and finally size determined that I'd have to go for the former, as I didn't want an over-sized monster. That all went out the window when I came across a great deal on a plasma of course and here I am today, the proud owner of slinky new plasma.

Having tested out the true blacks, greens and whites on a BBC nature DVD, I thought I might as well see how Mass Effect looked. And all I can say is, it's all so much easier now that I can see the difference between the guns and can read their characteristics. I can even tell the upgrades apart. I've progressed in leaps and bounds since I could actually see. Never mind next-gen graphics and HD, I'm talking about scales-falling-from-my-eyes-and-so-it-came-to-pass-that-the-blind-could-see type revelation.

That all said and done, spanking new telly aside, how awesome is Mass Effect!? If you haven't tried it, I'm experiencing much ME love at the moment and wholeheartedly urge you to give it a go. Everyone's been banging on about it for ages, I know, but I guess I had my head in a pillow or something and now I'm converted and I'm evangelising for all I'm worth. It's not very often that they get sci-fi right, but blow me, they've gone and done it with this one. It really is like walking through an episode of Battlestar Galactica or Star Trek Deep Space 9.

Remember when people thought the future was interactive TV? Well, Mass Effect is the closest you're going to get to it right now. I'm not very far in, but I'm hooked. The variety of alien races, each with their own rich culture and idiosyncrasies, is amazing and makes it feel like there's whole universe out there to explore.

Yeah, I know I'm a bit slow to jump on the whole Mass Effect train, but buying a house in dire need of decoration and the like leaves you with little time and even less energy for anything other than slumping in a vegetative state. But have no fear dear play chums, rest easy in the fact that my few moments away from the paint brush or shifting of earth in the garden, will be well spent in the shoes of a woman called Shepherd.