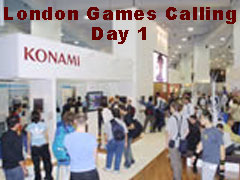 Beep, beep, beeep, BEEEP! Huh,,,wassat. Oh, god it's 5:45 am and London Games Week is about to begin. Wake up slowly to BBC Breakfast News and begin to gather my thoughts. First trek across town of the week. Thankfully, not all my days are going to feature such early starts, but they will all require me to become intimate with London transport. It sounds easy enough, but I guess you've never had to rely on the oldest train network in the world.

Now, perhaps I should explain what exactly is happening at the London trade shows this year. ECTS is still chugging away over in West London, but the show everyone's talking about is EGN. This is the new rival show, set up by ELSPA (The Entertainment & Leisure Software Publishers Association). I guess ELSPA got fed up ECTS being crap, so here we are at London's EXCEL and hoping they pull a great show out of the bag.

Oh, I should also mention Game Stars Live – the consumer show attached to EGN. All the publishers are present, giving punters a chance to get their clammy paws on the Christmas line-up. Most notably, Halo 2 is at the show, guaranteeing a queue of clammering gamers.

Of course, London transport lets me down and I arrive for the morning press briefing a little late. But no matter, I sneak in and find myself a spot on the floor with other late-comers, just in time to see Roger Bennet, chief executive of ELSPA give us the low-down on the state of our burgeoning industry.

Next up was Aleks Krotoski, known in the UK as one of the more intelligent TV presenters for shows about videogames. She has written a unique white paper for ELSPA entitled Chicks and Joysticks, revealing the potential of the female gaming audience.

The paper has examined the role of women in the industry, the profile of female gamers and the success stories of games that have managed to tap into this market. The paper will be available from 9th September – so watch this space for a closer look at the contents.

Anyway, the press briefing wrapped up with a Q&A session. Well, there was one question from a Japanese journalist asking where EGN stands in comparison to E3 and the Tokyo Game Show. This gave Roger Bennet a chance to wax lyrical about the importance of the UK and European market and how it needs an identity through a show like this. EGN is designed to be an event that the industry needs, with an important mix of consumer and trade opportunities.

That was the end of the questions. I couldn't quite tell if it was a mark of general disinterest of the part of the press, or the fact that we were all tired, wanted breakfast a chance to get our bearings.

But enough of the industry, what about the games, the games, the games!? Well, I'm coming to that. My priority was getting to Halo 2, before the thronging masses were let in. It was going to be a matter of finding the Halo area and running for it during the press morning. Find out if I managed it in my Halo 2 report, which is pegged in the Industry Happenings section.

During the morning I managed to play Prince of Persia 2. The only thing I can say is it is looking absolutely gorgeous. Just when you thought a game couldn't get any prettier, they go one better and take it to eleven. I played through the tutorial, which took place on the deck of a pirate ship, with exploding barrels, flaming arrows and gruesome creatures. The movements are as fluid and acrobatic as ever and fans of the first one should be ready to give their right arm for this one. Those who missed out on the first one should buy it now, just to tide them over until PP2 arrives and then rejoice in the beauty.

Goldeneye returns, kind of, but published by the wrong people and just stealing the name from the real Goldeneye. Anyway, I put aside these potentially fatal issues and gave it a go. I have to say it was quite fun to play, although I didn't make it to any landmark Bond style moments. I could have been playing any FPS, but it was good fun. The controls were a little frisky, but I soon got used to them. It's a Bond game, so I'm sure it'll sell, but I'm also sure, diehard fans will be dusting off the original rather than sullying themselves with EA's effort.

Ghost Recon 2 was a little disappointing due to major slowdown. I was playing the Xbox version, so might try it out on the PS2 to see if it fares any better. Star Wars Battlefront was on show and being guarded by storm troopers, which made for fun photo opportunities. It was hard to get a feel for the game without being able to hear vital dialogue. A number of us tried to play it, but didn't really find anything to keep us coming back for my. However, I shall keep an eye out for it and hope it lives up to previous expectations, benefiting from a quieter environment.

Nintendo had gone all out on the design of its stand, which was a full on beach! However, due to power failure none of the press made it in during our dedicated session. My mission today is to stand in the queue and try and get in with the general public. Check back here for day two at EGN and Game Stars.