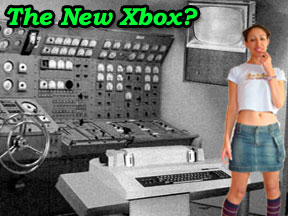 Nothing gets the gaming rumour mills going like news of a potential new console announcement. This week Microsoft hit the headlines with a clutch
of job advertisements which fuelled speculation even further. But let’s look at the case before us and see if it holds water.

The job postings have been taken as evidence that Microsoft is hard at work on Xbox 3 or Xbox 720, as some have dubbed it. Adverts for hardware engineers and graphics architects for the Xbox hardware team, described the job as "defining and delivering next generation console architecures." This was more than was needed to make the story forum fodder.

Added to this, developers keep hinting at the next generation of Xbox. In an interview with CVG
Avalanche’s Chris Sundberg, of Just Cause fame, was fairly open about a potential 360 successor already in the pipeline.

He said, "It’s actually quite an interesting subject for us – because when we worked on Just Cause 1, the Xbox 360 came out [at around the same time]. We had to do the 360 version in six months. It’s an interesting place again right now, where the projects we’re working on today might be coming out on [Microsoft’s] next technology."

Anyone who’s just splashed out on a Kinect will be going green around the gills at the prospect of a new Xbox around the corner.

The evidence appears to be supporting the rumours, but there are a few lingering doubts and the Kinect is one of them. It would seem ludicrous to launch Kinect on what would soon be old technology. Of course, there’s nothing to say that the motion controller wouldn’t work on the er..720. But with people still smarting from that purchase, it’s asking a little bit much, especially in these troubled economic times, for people to just chuck another £500 at a new console.

Not so long ago, Microsoft officially announced that the lifespan of the Xbox 360 will be expanded through software and hardware upgrades. In January 2010, David Hufford, senior director of Xbox product management told the Guardian, "The Xbox 360 was designed for a long life, and I don’t even know if we’re at the midpoint yet." This came just after the announcement of Project Natal, which of course has now hit retail in the form of the successful Kinect.

With the Xbox 360 sales going strong, it seems that Microsoft is offering gamers Kinect as the next stage of this generation. It’s the nearly next generation console. Developers haven’t even scratched the surface with Kinect yet. The hardcore is still waiting for that killer title that will have them flailing around like a puppet on a string and even mainstream gamers are champing at the bit for something other than bowling and pet sims.

There’s still the hard evidence in the form of those job adverts though. And there’s the undeniable fact that Microsoft’s never going to admit to Xbox 720 until it’s strategically necessary. However, it’s also indisputable that Nintendo, Sony and Microsoft have probably been working on the next generation for years already. No console manufacturer is going to launch a new machine and then just sit back and wait for the dollars to come rolling in. Product research and development is constant and Kinect, alone is proof of that.

I think we could be waiting at least two or three more years before we need to worry about the backwards compatibility of the Xbox 2000. So let’s enjoy the here and the now of gaming, rather than anticipating the dim and distant future.

Most wanted: The Journey