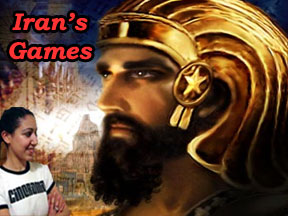 This year’s Gamescom had all the usual hallmarks of a video games trade fair. Stands adorned with posters, booth babes, noise, flashing games footage and queues of tubby, bearded games journos and industry types eager to get their clammy mitts on the next biggest thing, giving them bragging rights back at the office on Monday. However, this year, nestled among the great and the good from America, Europe and Japan, Iran’s National Foundation of Computer Games also had a stand in Cologne, keen to show the world that there’s more to their country than bombs and hostility.

Once hailed under the more romantic name of Persia, Iran now carries heavy overtones of war and military threats for Westerners. However, talking to the BBC, the Iranian games developers emphasized the rich history and culture of the region, making it the ideal source for exciting gaming adventures.

One such game is Garshap, a third person adventure based on an epic poem and ancient Persian mythology. Iranian game developer Arash Jafari created the game with a college friend and wanted people to see Iran’s ‘true culture.’ Arash was at Gamescom, looking for financial backers.

Based on Gods of War, Garshap, places a Persian warrior at its centre, but features the big swords, mighty beasts to fell and exciting, exotic backdrops that are familiar to gamers the world over. Mr. Tarbyathjoui, a spokesperson for the INFCG, said that Cologne offered Iran’s development industry an opportunity to demonstrate their capabilities and talent. Speaking to the BBC, he said, "We are using this event to promote what is happening in the Iranian games industry. We believe we have more potential and we want to promote that potential."

If we were to pre-judge Iran’s games production by our own low standards we would expect to see a preoccupation with titles centered around war and killing our political enemies. And of course, we would have no room to comment, having enjoyed decades of entertainment based on the theatre of war. However, Iranian games developers seem to be all to ready to shrug off the mantle of war. Instead, they want to embrace their rich cultural history and export it, which seems like a darn fine idea.

Despite the nice, fluffy, touchy feely, rainbow nation notion of sharing cultural history is great in theory, there are many hurdles standing in the way of Iran’s games industry, when it comes to conquering the foreign market. Think Iran and we, the West, think bombs. One spokesperson, admits this is a problem and stresses that they were at Gamescom, "to show that we have a great cultural background and that we can produce cultural games." He wanted to encourage Iran’s developers to resist the temptation to create copies of Western style games, which focus on contemporary wars and killing, in favor of bringing something new to the table in the shape of Asian stories and culture.

Iran’s games industry faces hurdles at home, as well as abroad, as the ESRA (the Iranian equivalent of ESRB) works to ensure video games conform to Iranian and Islamic cultures. Porn and drugs are forbidden, as well as alcohol, unless it is associated with a villain or evil entity. Some games are only available to those who are at least 25 years old and married, and developers have to be careful what material they include to avoid upsetting Islamic sensibilities. This may be one of the reasons that Persian mythology seems so popular. It’s a safe option that doesn’t upset either side of the fence and has the benefit of promoting a positive image of Iran.

Despite the restrictions under the ESRA, Iran has 35 design studios, making it a fledgling industry, but on of the leading players in the Middle East. In fact 2010 is the second year the Iranian stand has been exhibiting at Gamescom, in a bid to find Western investors.

However, political tensions between Iran and the US make things more difficult than ever. Unfortunately, media attention was focused on a game called ‘Special Operation 85: Hostage Rescue," which saw two Iranian nuclear scientists kidnapped by Israel. Players step in as Iranian special forces to rescue them, fighting against US and Israeli forces.

Bahram Borgheai, head of Ras Games who made Age of Pahlevans, told the BBC he doubted the game was real and suspected the images had been taken from an existing game and doctored, as the game had never been released in Iran. And to be fair, it is the world’s most ridiculous game title ever (and that’s no mean feat), so I’m inclined to agree.

Even if the game was a fake, it still puts up another wall for Iran’s games developers, as they look for financial support beyond their country’s borders.

Not to be deterred, the Iranian’s will be back in Cologne at Gamescom 2011 and although they will all be attending E3 next year, the political situation means that an Iranian game developer’s stand will not be hitting the US any time soon. Today, countries like Russia, India and China are entering the gaming fray and it looks like some time tomorrow Iran will be joining to party too – let’s just hope they stick to their guns and bring us new and interesting mythologies, rather than a slew of poor man’s West-centric "kill the alien" style games.