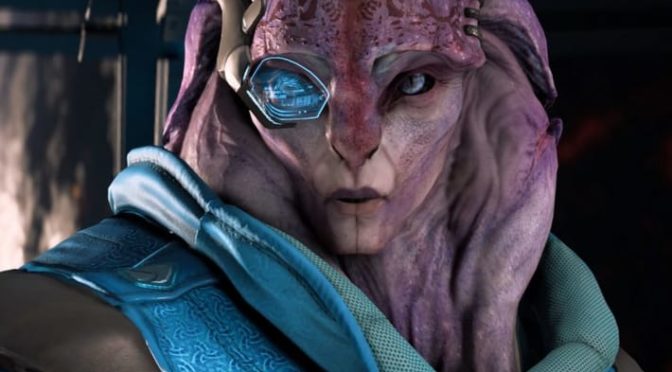 Make no mistake, I love Mass Effect. Games don’t do space opera often enough and even though we had ‘ending-gate’, I still rate the original Mass Effect trilogy as one of my favourite series. I loved the imaginative alien races, the relationships forged and lost and the tough choices that made me pause the game and walk around the garden to consider dialogue responses. Mass Effect: Andromeda offers me some of the same simple pleasures, such as romancing my way through space. However, Andromeda’s mistake is putting humanity at the centre of a story in a galaxy they don’t belong in.

Andromeda is supposed to be about the awe-inspiring task of finding a new home in a vast, new galaxy. The only thing is, the game isn’t as epic as the trilogy, for obvious reasons and is actually just a story of benign colonialism.

One of the things BioWare does really well is create interesting aliens, who look cool, but also have interesting cultures. From the Elcor to the street preacher, Hanar and the mole-like Volus, the Mass Effect trilogy was brimming with intriguing and memorable aliens. Humanity was the newcomer and had to prove itself in the Citadel, but then as Shepard we saved the world, so hooray for us.

Andromeda has basically taken us to a new galaxy to tell the same story, except Ryder’s story isn’t that interesting. [Spoilers ahead] Conveniently, when we awake from stasis, none of the other ships have arrived, so there are no Elcor or Hanar or anyone. This means the only pathfinder is human, which makes Ryder the only one who can lead the troop of space refugees to their new home.

In search of ‘the New World’, we meet the Kett, the villains of the piece. To be fair, we do try and ‘come in peace’, but then they shoot us and we shoot back and we are no longer interested in their perspective. From here on in, the Kett are the enemy and need to be killed on sight. So far, so colonial.

The only other new alien race is the Angara and Jaal becomes your crew mate and possible love interest, if you’re a female Ryder. The Angara favour honesty and open emotions, which can lead to some interesting dialogue, if they feel you’re being too formal or hiding something. They look cool, their world is beautiful and many of them have African accents, with Jaal played by Nyasha Hatendi, who is of Zimbabwean heritage, which is a nice touch.

As the story progresses we discover that the Angara are being enslaved by the Kett, but despite their advanced society, they still need Ryder to save them. This really bothered me when I got to the companion mission for Jaal, which is also part of the central quest.

We land on the icy planet, where the Kett are keeping the captured Angara, including the powerful figure of the Moshae. The Angara apparently can’t go in and free their own people because they need Ryder and her AI, SAM to infiltrate the facility. Once inside, the Angara are sidelined and simply used to distract the enemy. Then, when we witness a horrible act carried out on one of the captive Angara, what should be an emotional scene, is just a precursor for a firefight.

If we were playing  as Jaal, the moment when he puts his hand on the glass, reaching out to his fellow Angara would have been gut-wrenching. But as we’re playing what is effectively the white-saviour role in a story of colonialism, we’re not that emotionally invested in the plight of the Angara, which is a shame.

Don’t get me wrong, I am enjoying Mass Effect: Andromeda. Even though it’s not as gripping as the original trilogy, I still love being in space with my squad of friends and lovers. However, I wish BioWare would allow us to play as an alien out to save their own world. I wanted Andromeda to take a more critical look at colonialism, by making humans less than heroic and examining the perspective of the invaded, rather than the invader. Instead, BioWare continues to rely on humans being at the centre of the universe, which only serves as a means of making aliens the exotic other who are simply there for a quick snog in the engine room.