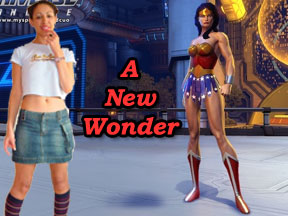 Another year and another superheroes MMO launches. This time DC is stepping into the fray with Sony Online alongside, as MMO and comic fans line-up to play DC Universe Online (DCUO). For the first time MMO gamers will be able to play with licensed characters, including Batman, Superman and the Joker. In another first, well sort of, PC gamers and console gamers can play together. Age of Conan promised the same, but never delivered, however it’s a reality for PS3 and PC gamers donning their cape for DCUO.

After years of dedication to City of Heroes (COH), I couldn’t let DCUO launch without checking it out. So let’s jump in.

The first and most important step of any MMO is the character gen. And nowhere is character gen more important than in a superhero MMOG. When it comes to supes, it’s all about creating an iconic look. What would Batman be without his fetish wear, Superman without his curl of hair and dedication to primary colours and Captain America without his scaled armour and patriotic shield? They’d be badly dressed schmoes, that’s what.

Now, don’t go expecting character creation on the scale of COH because you’re just not going to get it. I think the word of the day is "limited." Don’t worry, it’s not as dreadful as World of Warcraft, but then, that would be quite a feat.

Character creation begins by choosing gender and one of three body sizes – no tweaking and that includes no reducing of the massive boobs on your female characters. For those who are new to MMOs or gamers who want to jump right in, you can choose character templates based on DC heroes and villains including Batman, Catwoman, The Joker and Superman. This gives you a readymade build and skill set, such as martial arts and gadgets for Catwoman.

If you decide to build a character from scratch the first and most important decision you make is whether you are a hero or villain. This will decide who you fight with and who your foes are. You must choose a mentor: Superman, Batman and Wonder Woman for the heroes and The Joker, Circe and Lex Luthor for the villains. This is also like choosing your class and decides which skills and powers are available to you.

My character was a fire-wielding sorcerer, mentored to Circe, arch enemy of Wonder Woman. I chose fire simply because of the graphic, which features the Kirby krackle that any comic book fan will know and this excited me no end.

The limitations of the character creation are bizarre. Don’t expect to be able to choose a face because they come as part of a package. Choose ‘tattoo’ and you get a set face, as do all the masks, goggles and other head accessories. Similarly, the team seems to have skimped on hairstyles, the easiest way for players to customize their character. I suspect, SOE is holding back in order to drip feed new styles and items in the monthly updates. A cheap trick if you ask me, because one month in, I’m not going to want to scrap my character just to get a new haircut.

Once you’re in the world proper, you get to playing through the noob levels aboard Brainiac’s ship (it’s a long story). First impressions are that the environments are looking nice, but nothing ground-breaking. However, DCUO is really mixing it up when it comes to combat. This really more of an action MMO and has an arcade feel to the fighting. Some may call it button mashing, but the dev team has always been clear that they want to create a fun superhero game, rather than a superhero MMO that follows the same well-trodden path of what’s gone before. I’m all for that, but only more playing time will tell me whether it’s going to work long-term.

Metropolis doesn’t have the hustle and bustle I remember from Paragon City, when I first landed in COH. And my one other gripe is the UI, which is less than intuitive. Simple things like grouping and finding your way around the menu seems clunky and fit for an old game, not one fresh out of the box.

DCUO hasn’t grabbed me the way COH did, but it’s also no Champions Online, which can only be a good thing. When it comes to comic-fan details, they’ve got it spot on. I’m more of a Marvel girl, so there are definitely references that I’m going to miss, but I know enough to recognize that this game is dripping in lore, which is where DCUO has one up on the City of games.

With such rich source material and an evident eye for detail, I’m looking forward to the monthly updates promised for DCUO, as we could be in for some real treats. Oh and there’s also the fact that this is the first time you get to fight side-by-side with Superman, which is definitely cool.