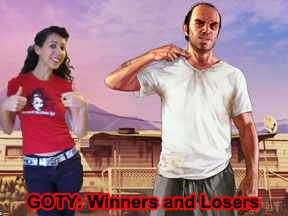 Over 20,000 gamers have spoken, and dubbed Grand Theft Auto V as your GiN Game of the Year 2013. No surprises there then. Although, it was a bit of a forgone conclusion that Rockstar’s sequel would steal the major crown, it is a worthy winner. Judging by the wide spread of titles across the categories, 2013 was a very good year to be a gamer.

Unlike Gravity’s performance at the Baftas, which saw the film scoop six awards, it’s interesting to see that GTA V didn’t sweep the board, winning in only three categories. In previous years, we’ve seen the Game of the Year dominate, but 2013, clearly, gave gamers a wide choice of quality titles to pick from. In addition, our new award categories, introduced this year, may be helping more diverse games gain recognition, making it a positive step forward for the GiN awards.

Irrational’s latest Bioshock title obviously has a lot of fans, but talking to gamers I know, I think it’s a divisive game that you ending up either loving or hating and nothing in-between. Gamers obviously appreciate a ‘shooter’ that offers a beautiful world, a strong female character and more than just space marines massacring aliens, which means, at least Irrational goes out on a high with Bioshock Infinite, before the studio closes.

I was glad to see The Last of Us pick up some awards. Although Ellie didn’t win Best Female, this was a hotly contested new category and Lara Croft stole the crown with a great performance from Camilla Luddington – the first person to give Lara an actual character. This also suggests that Tomb Raider is back on form.

The Last of Us did get well deserved recognition for its script with the Best Story award, as well as winning Best PlayStation 3 Game. In contrast, Beyond Two Souls picked up a few nominations, but failed to win any of its categories.

Another big winner was Assassin’s Creed: Black Flag, singing its way into gamers’ hearts, who gave it Best Original Soundtrack, as well as Best Adventure Game. I think it deserves both of those accolades. The music was excellent and even though I missed the traditional ‘Assassin’s Creed’ elements, Black Flag offers players more than enough to keep them occupied without unnecessarily cluttering the gaming experience.

Over in Nintendo land, which seems to have its own gaming ecosystem, Monster Hunter 3: Ultimate dominated both handheld and console. The strategy king, Sid Meier came back strong with Best Apple/iOS Game for the WWI airplane combat game, Ace Patrol.

I’d say it’s a good gaming year, when Call of Duty doesn’t sweep the awards. The series hit a low point in 2013 and GiN readers’ choices reflect that with CoD: Ghosts only managing to secure Best PC Game. In contrast, the new category, Most Artistic, gave the little PSN exclusive, Rain, a chance to shine – an atmospheric mood piece that requires no guns or killing.

Now, 2014 is the year of the next generation, so we’ll have two new categories to add to the awards in 12 months time. It’ll be interesting to see if we’re still judging 360 and PS3 games, how many exclusives are around and how the indie scene is shaping up.

All that’s left to say is congratulations to all our worthy winners and thank you to our readers for exercising your right to vote ‘ a right not many gaming websites offer you. It’s not every year I can say, I think you’ve done a stand up job. See all the winners here.