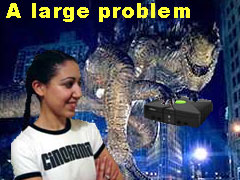 Sony has tolled the death knell for this generation of consoles. Yup, PS2 just got smaller, which is always a bad sign for the tubbier older brothers. All of a sudden, they're just so last season dahling! It's like they just gained ten pounds and jeez, do you have to take up so much room. Of course there's one console that needs to go to weight watchers more than any other. Come on, we all know who I'm talking about – the mighty, mighty Xbox.

Our favourite black and green gaming machine has just been reduced to under Â£100. That's an impulse buy – mere pocket money. And a stark contrast to the Â£350 I paid for a day one delivery. Not to be outdone by Microsoft, a week or so later the PS2 is reduced in more ways than one. Its Â£105 price point is joined by a make-over. If this was a game of Top Trumps, Sony would be winning hands down.

The new incarnation of the PS2 is 75% smaller than the original! Can that be? Does 75% less even fit a disc in it!? Sony has actually managed to take the PS2 to minus 11. And all of a sudden everybody wants one again. Even people who've already got one are thinking, yeah, but that one's smaller, which is so much cooler.

This just proves that size does matter – in the US it's the bigger the better. You guys like your cars to be the size of houses. You don't even like to drive them properly because America is the land of convenience. And automatic is so much more convenient than actually changing gear.

The super size me generation is enamored of all things big. Meanwhile, back in old Europe, we invented the sports car. It's faster, sexier, better for pulling the opposite sex and yes that's right, it's smaller. Over here, smaller is better and Sony is courting our fetish for all things diminutive. At just 2.8 cm thick compared to 7.8cm on the original PS2 and a substantial 9cm on the Xbox, the new model is making us fall in love all over again.

On drooling over the slim line potential of the new PS2, I got to wondering why Microsoft didn't use their price drop as an excuse for a redesign. Now it's no secret that Xbox's lack lustre performance in Japan is reputed to be down to its size and the software, but is that just an urban myth?

The western idea of the Japanese is that they all live in shoe boxes, buy school girl panties from vending machines, sing karaoke, eat raw fish and have an obsession with technologically advanced toilets. So it's easy not to question the fact that a whole nation would not buy a product based on its size.

Konami Boy recently did a little market research when a Japanese colleague came over to London. Always one to question things, KB asked if the Japanese really didn't buy into Xbox because it was too big for their living-rooms. And the simple answer was: yes. So there you have it! Apparently, the color green also causes some concern. Green signifies alien, which just ain't cool to the Japanese who prefer silver.

At the end of the day, it just makes sense that silver is cooler than black and green. The best things come in small packages and all the other clichÃ©s also apply in this instance. Just this week, Peter Moore, Microsoft's VP, told a Japanese business publication that Xbox2 will not repeat the mistakes made with Xbox in Japan. Size will be a major factor and hopefully, so will styling. Microsoft is also focusing efforts on supporting Japanese developers to create software that will appeal to the local market.

If Microsoft wants my advice, which I'm sure they do – I mean who wouldn't and I'm not even going to charge them (this time). They need to get the likes of Jonathan Ive on board. He's the British designer who made desktops a thing of beauty with his iMac – no mean feat. Then he gave us the iPod, for which we must be truly thankful. Okay, so he's hardly going to leave Apple for Microsoft, but Apple taught us that by putting a little more thought into design you can create an object that is instantly desirable.

I love my Xbox, but I just wish it was sexier. At the end of my day it sits under the TV, which is the central focus of my room. Can you really blame me if I want it to look nice? It's a cool bit of kit and Xbox2 is going to be even cooler so I'm expecting it to look a lot better than a black house brick from outer space. Microsoft take note.

Oh and one more thing…the restyled PS2 would have been perfect if only it was silver.