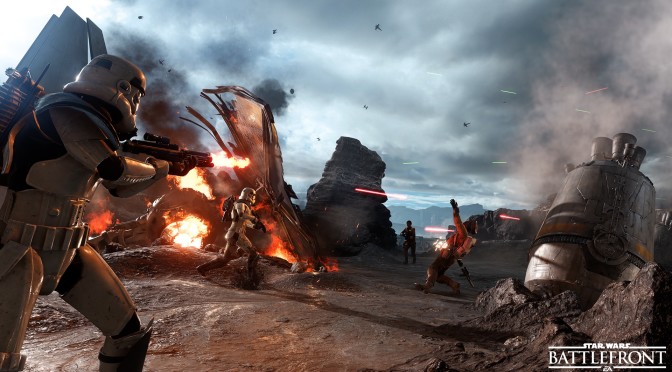 I realised something the other week, as I loaded up the Star Wars Battlefront beta. Until that moment, I hadn’t played a game with a gun in it, for over a year. Correction; a game where I had to shoot something. That’s quite a feat and a reflection of the range of experiences games offer these days.

The last game I played that included gunplay, was Tomb Raider. Maybe five to 10 years ago, finding a rewarding game that didn’t rely on mass slaughter of one kind or another would have been tricky.

I remember many GiN Lounge where I bemoaned the lack of anything beyond the ubiquitous space marine. Halo happened and then everyone went FPS mad. Even RPGs like Mass Effect tried to cater to the shooter crowd, but I knew there was more to games than just killing stuff in weird and wacky ways.

The other day, I was on a blog post that highlighted the problem of parents failing to check age ratings on games and monitor what their kids play accordingly. The comments section was fairly measured, with some mothers agreeing that age ratings are important. However, there was one woman who said she was pretty much anti-games and would keep her two boys away from them as long as possible.

What was great about this moment, was that mother couldn’t be more wrong about games, right now, if she tried. I feel like there is more variety than I’ve seen in a long time. And of course I commented to say that it’s easy to avoid violent games. It’s so easy, that I’ve managed for over 12 months, without even trying.

So, what the hell have I been playing? Anyone who follows my Let’s Plays or my reviews knows that I favour story, for the most part. I mean, I love to shoot stuff now and then. That Star Wars beta was great, but the games that really stay with me have atmosphere and poignancy, not just great mechanics and pretty graphics.

Top of my current playlist has been Life is Strange, the walking game from Dontnod, with the likes of Everybody’s Gone to the Rapture finishing my non-violent year with more eerie, minimalist gameplay.

Narrative has become a thing in games and I love. We’ve always had games with stories, but then we’ve had games with “stories” a.k.a. a rough outline of something happening and an enemy that must be killed to save the world. There was always an element of details schmetails about these stories.

Games like Mass Effect really pushed the idea of story, as did Heavy Rain and Beyond: Two Souls, for better or worse. With The Last of Us, story and AAA had the perfect marriage, but it’s really the indie scene that’s taken storytelling to its heart.

Her Story found a new way to tell a story or at least, presented the unraveling of narrative in a new and interesting way. Meanwhile, Monument Valley offered atmosphere, rather than clear narrative, all in a beautiful meditative package.

The success of indies is rubbing off on the major players, with the big IPs like Tomb Raider now relying on writing talent to reboot the series. Storytelling and storytellers are finally earning a place in games. And for someone who writes fiction, that’s heartwarming. I always knew games could be an exciting storytelling medium and now we’re finally getting to explore the possibilities. Of course, we still get to shoot stuff and that’s okay too.