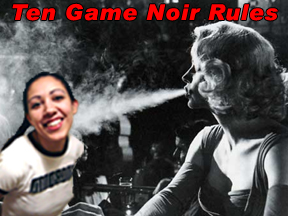 It’ll come as no surprise to you, dear playchums, that I’m excited about L.A. Noire. As a huge fan of film noir, I’m expecting big things and if anyone can pull it off, it’s Rockstar. L.A. Noire is the first outing from the developer’s Australian studio Team Bondi, so it will be interesting to see how it pans out.

We’ve had a few trailers to pour over, offering lashings of moody jazz, chase scenes over rooftops and Venetian blinds ahoy, so things are looking good so far. However, if L.A. Noire is really going to be noir, it’s got to get a few things right, so here’s my top 10 things I’m expecting to see in the game when it launches in May.

Suits and hats: We want period detail and that means everyone wears a hat, kipper ties and cars with running boards.

Femme fatale:There’s gotta be a dame, she’s gotta be hot and she’s gotta lead to trouble. Team Bondi’s gone one better and given her a European accent. A nod to the origins of noir.

Shadows:This game should be channelling The Third Man and that means shadows splashed up against walls from the headlights of cars and the echo of footsteps in dark alleys.

Plot like a cat’s cradle:Twisty and convoluted; that’s how noir should be. Keep us guessing until the bitter end.

Crazy camera angles:We want tight closeups, ceiling-fan eye view and up-close and personal with the barrel of a gun. All this lends to the tension and claustrophobic feeling of unease.

Bad guys:We need plenty of gangster types who turn up out of nowhere when the anti-hero flicks on a desk light in a dead girl’s apartment. They’re mean and they aren’t afraid to show us who’s boss.

A temporary loss of consciousness:This is the part when our protagonist gets a clonk on the back of the head. He wakes up and one question is answered, only to raise ten more.

Ambiguity:If this is truly going to be noir then we need some moral ambiguity. Our hero can’t be too squeaky clean, so I’m expecting some tough decisions and some gritty moments. And if there are a few loose ends when the credits roll, so much the better.

Snappy dialogue:It’s got to be sharp and witty without being laughable. Our leading man needs to be running verbal rings around the bad guys, but when it comes to the femme fatale it’s all about the innuendo, keeping it sexy without straying into smutty (a fine line, game dialogue usually blunders along).

Cigarettes:Like it or not, when it comes to noir, smoking is cool. They should be smouldering in ashtrays, lipstick stained or spot-glued to the bottom lip of our hard-boiled detective.

So them’s the rules see. If you don’t stick to the rules, all you’re left with is any old Joe in a hat, with more than a little idle curiosity, and we all know how that worked out for the cat.