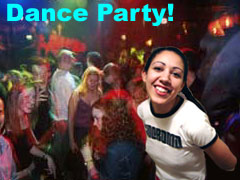 Who said that gamers are tubby, spotty, pale and generally exist in carpeted bedrooms (or living rooms if they're grown up with jobs) on a diet of pizza and diet coke? Well whoever they are and wherever they dwell, they were dead wrong! No, really"dead wrong!

A revolution is upon us dear gamers and this time it's not just Konami trying to convince us of the fact, but the likes of THQ and er"Bigben Interactive too! It's time to get on your dancing shoes (well, actually, it's probably best to take them off all together) and strut your stuff on the dance-mat.

The age of the dancing game is upon us. And let me tell you, it is no longer just the remit of Korean kids in tired old beach front arcades with feet that flash faster than any fast thing you've seen in an arcade before. I know they've been around for yonks and Konami Boy's forever telling me that there's an underground fanbase of their Dancing Stage series that's preparing to take over the world via dance-offs. But now the UK is well and truly smitten and Konami's no longer dancing solo, as all and sundry bring out their own dancing games.

At the beginning of June, distributor Bigben Interactive announced its foray into the world of dance spectaculars and outlined their plans for Dance:UK. Could it be the dancing game that has Konami reaching for its dancing queen crown?

Who'd have thought a paper cut out dog and his onion kung fu master mentor (try and say that after a few pints) could have spawned a whole new gaming craze. After PaRappa the Rapper, Konami took the rhythm action game to a whole new level by introducing dancing to the arcades in the form of Dance Dance Revolution. Gaming extraverts didn't look back – step back, step right and sl-iiide.

But when the big K brought Dancing Stage into people's homes via PlayStation, we had a gaming revolution on our hands that broke down barriers – not to mention the scores of living room bookshelves that were brought down by flailing limbs. Here was a game that was bought by that section of the populace that has always proved elusive to the gaming marketing man. Dancing Stage was being played by girls, scores of them were bopping and step, stepping in living rooms around the world.

Then mothers got wind of Dancing Stage and now it's like Jane Fonda meets Existenz. Walk down suburban, residential streets around the UK and peek through the net curtains to find wheezing house wives scoring "perfect" on the Bloodhound Gang's Bad Touch. A sight I'm not sure I'm ready to see. All together now"so let's do it like they do on the Discovery Channel"la, la.

Let's face it, if it wasn't for Dancing Stage, PS one would be dead in the water. In fact, take a look at the UK PS one chart on any given week of the year and there the latest edition of the disco diva of the gaming world will be, sitting pretty on the top spot. You may even catch one of the previous editions lurking somewhere around number eight.

There's no getting around it, Konami had had a monopoly on the dancing game. Of course THQ tried to get a slice of the pie with Britney's Dance Beat, which was singularly unsuccessful when we discovered you don't even get to be Britney"I'm mean puh-lease!

The latest challenger is Big Ben Interactive – not known as a publisher, which raises a few eyebrows already. Through careful research though they've deduced that dancing games are "successful outside of the traditional gamer demographic" – translated from marketing speak that means "we've discovered girls and the ladies like dancing games, so we reckon we can make lots of money if we make a dancing game". And to prove the depth of their research the game goes by the innovative name of Dance:UK AND features an integrated karaoke function.

I have to admit, Konami probably aren't thinking of hanging up their dancing shoes quite yet, but it does prove that the whole dancing thing has garnered serious interest from all corners of the industry. Will Big Ben really deliver the "next generation of dance games?" I seriously doubt it, purely because I don't think there's a "next generation" left in the genre. Maybe Sony's Eye Toy will bring a new take on the dancing game, but short of that I think Konami have pretty much cornered and long may they sashay.

From a personal point of view, I have to say I've never gone in for the public humiliation that is the dancing game. All power to those 18 stone gamers who feel confident enough to throw off their MMORPG mantle to get down to a bit of Spice Girls, but I'll just sit over here and watch in quiet amazement. Maybe, just maybe when Konami gets the Breeders and Blink 182 on to Dancing Stage, I can shut my curtains and do some dance mat moshing.