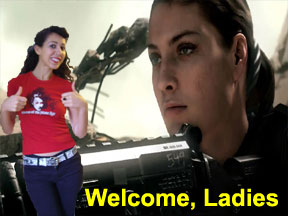 Now We Can Kill Women (and dogs) In COD Too

I don’t play Call of Duty – at least, not since it left the Second World War setting – but it’s come to my attention that the latest in the series will include female avatars for the first time. Correction, Call of Duty: Ghosts will include dogs and women. There’s been a lot of coverage, with many asking why it’s taken this long. Meanwhile, others suggest that female characters may have an advantage because people may hesitate to kill them. So what’s the big deal about women (and dogs) in CoD?

The first question to ask about women in Call of Duty may be, why has it taken so long? According to many developers on a host of different games, offering a female character option is too expensive and takes up too many development resources. No, I didn’t just make that up on a facetious whim. They actually said that.

Infinity Ward producer, Mark Rubin, claimed that previous CoD engines couldn’t handle character customisation. Excuse me if I snort in thinly veiled derision. It’s the 21st century and we can’t create a game engine that manages to offer male and female multiplayer characters? So every MMO ever must be just using pixie dust then. And *cough* Halo *cough* Gears of War.

Let’s not forget that the Call of Duty series regularly tops the Christmas games charts, raking in millions of pounds every, single year. With this in mind, it seems rather disingenuous for them to say that technical limitations made including women impossible until now. I think it was more likely that they couldn’t be arsed and didn’t want to spend the money. It didn’t seem that important. But then they introduced the dog in Ghosts and someone probably said, "Hey guys. Do you think people might get upset if we include dogs, but still don’t have women?" Silence. Penny drops. "Yeah, okay ‘ Ted, get on that ponytail rendering will ya?"

So come November, we’ll have women in CoD, now what? Infinity Ward has assured us that female characters will fill up the same area of the ‘hit box’ as men, despite having a slightly smaller physique, ensuring there won’t be a gameplay advantage to playing as a woman. However, some are saying players may hesitate to kill female players.

IGN created a video podcast on how the team feels about killing women in CoD. Two out of three men on the panel admitted that they felt uncomfortable, with one saying it made him ‘pause for thought.’ The third guy said he was already numbed by in-game and general media violence, so it really didn’t make any difference what you were killing. The only woman on the panel said she didn’t think it should make any difference and she hopes that, in time, people will kill female players as readily as they do male characters and it will just be the norm. Most of her panelists nodded in sage agreement.

I have to say I was somewhat baffled by the female journalist’s comments. Whilst I understand that she sees women in CoD as an important and overdue step forward for the world’s biggest earning game series, I am concerned that she thinks that the sooner we disregard in-game killing, regardless of gender, the better.

I’ve touched on this before, but it is more than a little disturbing that the slaughtering of male characters is so central to our entertainment industry. When a panel discusses the emotional impact of killing a non-male character, I see a ray of hope. Gamers do still feel. We aren’t totally numb to in-game genocide. Do we really want to get to the point where we can kill women, children and men with equal detachment? I think our time might be better spent reassessing the role of violence in games and our obsession with notching up kills as a mark of success.

I’m glad that CoD fans can now play as women in their favorite game and was surprised that this wasn’t an option before. Male avatars shouldn’t be the automatic default and, no, the technological limitations excuse doesn’t wash. However, I hope we never get to a point when we stop questioning who it is we’re killing and why. I hope players always have that second when they think, "Can I really kill this person, dog, alien, baby, whatever?" and take a moment to consider how it feels.

Oh and I also hope that the inclusion of female characters will always take precedence over dogs.

Most played: Ni No Kuni