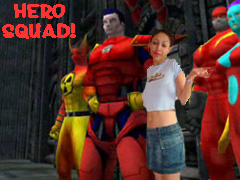 Not being much of a PC gamer, it shouldn't really shock you to hear that I've never played an MMOG. Okay, so maybe you are shocked but let me explain.

The thought of online gaming has always filled me with a sense of dread. First there's the perception that you have to have graduated from the university of Dungeons and Dragons. The closest I got to D&D was one of those choose your own adventure books and a dabble with a dice throwing adventure book.

You see, online gaming to me has always involved D&D veterans creating a fantasy alter-ego so they can interact with other D&D veterans. They all hang together online, talk in ye olde English and swap mindless banter about spells, sorcery, dragons and sea beasties.

Then of course you've got your cyber goth online gamers who leave their sword and cloak in the wardrobe in favour of automatic weaponry and state of the art military battle armour. These people will be the Quake devotees and I've always thought it's best to leave them well alone.

Even considering I've got over these hurdles and put aside the fact that the dedicated online gamer errs on the side of eccentric. Even then chances are you go through the whole thing, get online and get slaughtered in seconds – whoo, hoo, fun. Give me some of that, just what I've always wanted to do in my spare time.

As far as I could make out online gaming would be like being invited to a party where everyone knows each other and where they all know the rules to all the party games. I didn't want to speak in character all the time and go through the torture of meeting god knows who online. Having said that I was always looking for an opportunity to dip my toe into the water and overcome my MMOGaphobia.

You'll be glad to know that the Holy Grail of online gaming has arrived and it's called City of Heroes. It all comes down to the fact that I'm a sad comic book nerd (amongst other things). The lure of creating and playing as my very own super hero far outweighs any misgivings I could ever have about online gaming.

A few weeks ago I received a press release inviting me to join the Beta test for the European server and the rest as they say is history. I managed to get a code for Konami Boy too, so we could both save the world from arch villains.

The following Sunday was spent creating and naming our characters. Now, as a Marvel fan I had a very clear idea of what my hero should look like. I chose to make my hero female, tall and athletically slender. Big hair was the main order of the day, but no mask. The gloves had to be long and had to have a big fold down cuff, there was just no two ways about it. Thigh high, heeled boots and a belt was an absolute must. Not a belt with a buckle mind, oh, no a pale gold belt with jewel was the only way to go.

Finally, after about an hour just trying to think of a name that hadn't been taken, I was ready to enter the online world. So off I went into the training area, got used to mouse and keyboard slowly and then I entered the world proper.

It was awesome. There were super heroes everywhere zipping and flying about and standing heroically with hands on hips. It's a strange thing looking at the fantastical characters and wondering who the mastermind behind the puppet is. There could be some interesting psychoanalytical data in logging the parallels between a person and their hero. Do you make the person you want to be or create a reflection of yourself?

Despite revelling in my new super world I still had some reservations about conversing. For a start I didn't know how to, so I just spent my time zipping about and avoiding eye contact. But as luck would have it, while I was just standing about Miss Marvel said "Hi." I felt vindicated in my choice of old-school Marvel attire, but at the same time panic-stricken.

Oh, my god she spoke, how do I speak back? Oh, god she's going to think I'm a retard and just walk away. With help from Konami Boy I managed to scramble a reply to her. Miss Marvel then asked if I'd like to team up and I thought why not; don't want to appear rude seeing as she made the first move. So we stood around for a bit shuffling our feet and then she zipped off, with me ambling along behind. I eventually caught up to her and helped her deal with some thugs. Then we found another rumble and I got killed and sent to hospital.

Since then I've had many an invite and even joined a super group, although our gaming patterns seem to be different so we're never on together. Like all social phobias, there wasn't really that much to be scared of. But that said, I don't think I'll venture into the world of goblins and wizards. I'll stick with super heroes for now because they're my kind of people.

Most played: City of Heroes