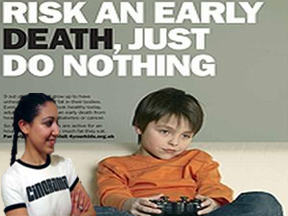 The latest storm in a gaming teacup has been the UK government's Change4Life campaign. But what could gamers have to cry about a government healthy living initiative? Well, let's try a poster of a slack-jawed, zombie-eyed child, slumped with a PlayStation controller in his hand, accompanied by the slogan ‘Risk an early death, just do nothing.'

Of course the industry threw its arms up in disgust and the forums were bristling with outrage and condemnation. The poster was backed by charities including The British Heart Foundation, Cancer Research and Diabetes UK, as part of the Change4Life campaign. Other posters included an image of a child about to consume a piece of cake and the aim of the initiative is to promote physical exercise for children.

My immediate reaction was of the here we go again variety. Games equals easy scapegoat for all society's ills. And I wasn't alone in the knee-jerk condemnation. After all what have games ever done to anyone? Trade publication MCV took up the fight, writing to the Advertising Standards Association (ASA) and urging readers to complain. ELSPA, the UK trade body for the industry, was also quick to act and had an urgent meeting with the government. But the more I read past the headlines, the more I thought perhaps the poster was just doing its job.

Looking at the image, it is very effective. It uses gaming as a visual shorthand for TV, games and modern pastimes that increased the inactivity of kids. Okay, so the child could have been watching television or reading a book, but it wouldn't have had the same visual impact. Playing games are the latest thing and unfortunately the latest threat our children face is obesity, early onset diabetes and heart disease. Do you really think a child reading a book would have the same punch for a contemporary audience as a kid with a games pad in his hand? In case you're struggling with this one, the answer is: unlikely.

Last year, figures revealed that one in six children in the UK can't write their own name or say the alphabet when they start school. So I'm thinking more kids are probably inactive as a result of playing videogames than reading books. If we're to believe the hype, playing games and surfing the net is pulling people away from the television, as ratings continue to fall. This leaves games at the top of the entertainment tree and this makes it the most effective target for a healthy living campaign such as Change4Life.

It's easy to throw our hands up in despair at the first sign of criticism, but I don't honestly think anyone with any sense would look at that poster and think games kill children. Let's face it, more families than ever are enjoying gaming together in the shape of the Wii. And what with its focus on leaping around the living-room like half-wits, games are looking more active than they have before.

Ultimately, the games industry has to realise that it's hugely successful and it is promoting a largely sedentary activity to boot, which means we're going to be the subject of concern. However, it's not the games or the creators of games who are under fire. Games don't kill people. Eating too many pies can though. These posters aren't targeting the games industry, they're targeting parents. You know, the type of parents that don't pay attention to age ratings and the type of parents who can't be arsed to take their kids to the park to kick around a football.

Our kids are fat and if we don't do something about it now they're going to put overwhelming pressure on the National Health Service (that's free hospital treatment, for those in countries that don't have a welfare state) and die young. The Change4Life campaign is trying to give people a kick up the bum and it appears to have sent a wave of mild hysteria across the games industry in a kneejerk reaction worthy of a tabloid newspaper.

Some kids play too many games or watch too much TV, others eat too much junk food and most could do with more exercise – that's all this campaign was trying to say, so get over it.