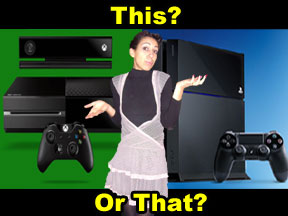 November 2013 is an important month for gamers and Christmas gift buyers, as we eagerly await the launch of the next generation consoles, PlayStation 4 and Xbox One. As the countdown begins, those who haven’t already pre-ordered a console may be tempted to try and snag a box on launch day. But which one – team green or team blue?

That’s where I come in, your own impartial imparter of the pros and cons for each console. Let’s get down to the nitty gritty of each console and compare them.

On paper, the Xbox One and PS4 don’t have much difference between them. They both boast Blu-ray players, 500GB hard drives and 8GB of memory. However, it’s no secret that the PS4 runs at 1080p, whilst the Xbox One limps over the line at 720. In short, this means PS4 games could look better on launch day, especially if you have a larger television. However, once developers get to grips with it, they will probably start pushing Xbox One’s capabilities fairly soon, making the difference negligible.

Basically, PS4 has the edge, when it comes to power, so if you’re a graphics junky, then Sony’s console is the safest bet.

Microsoft is putting its money behind Kinect for Xbox One. It was a bit of a gimmick on the 360 and never really became the gaming revelation we were promised. This time around the camera is more sensitive and more powerful, meaning it can recognize individual players and even monitor your heart rate. The microphone allows you to make vocal instructions to the console. The big brother aspect of all this hasn’t escaped, but Microsoft assures us that Kinect won’t be monitoring players round the clock.

Sony aren’t quite so keen with their Kinect equivalent, the PlayStation Eye. It offers the same face and voice recognition, plus tracking of body movements. However, it’s unlikely to offer the accuracy of Kinect.

Xbox One comes with Kinect as standard, whilst PS4 owners will have to splash out extra cash to get the delights of the PlayStation Eye.

If you think body-controlled gaming is cool, and enjoy talking to your games console, then the Xbox One is more likely to deliver.

Microsoft came out all guns blazing on the non-gaming front. Whilst both consoles offer movies, music and TV on demand, Xbox One lets you control your TV via your console. Xbox One can also switch between TV, games and movies seamlessly. Many of the features are only available in the US however, at least initially.

The PS4 doesn’t boast as many features. But you can access TV on demand services, such as the BBC iPlayer, without having to pay a yearly subscription. Xbox One owners will need to cough up some cash to get any of their extra features.

If you’re a massive sports fan and want to talk with your friends over games, movies and matches, the Xbox One is the box for you. But if you don’t enjoy multiplayer gaming, but want to access TV and movies without paying extra, then pick the PS4. It’s all about whatever floats your boat.

Many of the AAA titles are multi-platform now, but each console is managing to hold on to a few exclusives.

Xbox One has toga hack-and-slash Ryse: Son of Rome and Dead Rising 3, plus Forza Motorsport 5. Future releases will include Titanfall and of course the latest Halo from 343 industries.

PS4 offers Killzone: Shadow Fall, family friendly Knack, plus Drive Club for racing fans. Sony’s machine has got a bit less clout on launch day, but Naughty Dog’s Unchartered is on the horizon and perhaps a follow up to The Last of Us. Sony also has the likes of Quantic dreams firmly in its camp, as well as arthouse developers, delivering games such as Journey, Rain and Unfinished Swan to PSN.

Basically, if you want games that require something different to just shooting stuff, PS4 is the way to go. However, if you want the ultimate multi-player, gun-toting gaming experience, you can’t go far wrong with Xbox One.

The PS4 is first out of the blocks, launching in the US on November 15th, then Europe and Australia on November 29th. It costs $399 in the US or 349 in the UK with a controller, HDMI cable and headset. To access multiplayer and play online games, you’ll need to pay an annual subscription of $39.99 for PlayStation Plus. However TV streaming is free.

Xbox One launches on November 22nd and costs $499 in the US or 429 in the UK for the basic package with leads, controller and Kinect. To be able to access any entertainment or online play options, you’ll need to pay an annual Gold subscription of $39.99.

Simply on price, PS4 seems a much more appealing prospect at $100 cheaper. It depends what you think that extra cash buys you, and how much you value Kinect.

Each console has its pros and cons. In the end, it comes down to what kind of gamer you are, what your entertainment priorities are and how much cash you’re willing to splash. On the other hand, you could just let the launch day frenzy pass and let the dust settle. With no key exclusives coming to either console for a while, the shrewd gamer will be waiting for the reviews to come in. There are also those nasty technical issues that seem to raise their head at the start of every new generation. Best to miss those, make an informed decision weeks or months down the line and watch launch day with detached curiosity.