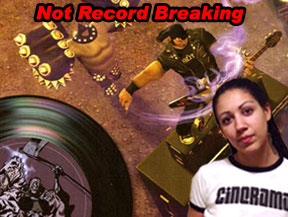 But Not Hard Enough!

I'm sure I'm not the only one who was thinking Brutal Legend would be Spinal Tap for gamers. For the first half-an-hour things looked promising. The game begins with real film footage of Jack Black in a record shop, doing what he does best. Then we're plunged into the game world of Eddie Riggs, a roadie voiced by Black, who ends up in a fantasy landscape inspired by rock album covers circa 1979. Think stone circles, giant stone swords jutting out of mountains, broken roads and fork lightning severing stormy skies in two.

The dialogue is amusing and the world is engaging, but sadly, the gameplay is not. I thought I was going to get a Devil May Cry style hack and slash adventure with upgrades to my guitar and battle axe. Oh no, instead, I'm plunged into an RTS nightmare.

I can handle a little RTS, especially in a disarmingly amusing setting with a rock soundtrack as my companion. However, Brutal Legend offers a ham-fisted effort. Major battles are played like a metaphorical rock concert. Geysers of fans must be harnessed by building merchandise stands to secure their loyalty, which then feeds the number of troops at your disposal. This is all very wry and knowing, until you realize that spawning troops for your battle is slow to say the least.

While your foes are attacking your merchandise stands, you're desperately trying to summon enough head bangers, rock chicks and roadies to defend your ground and press forward. This would be fine and dandy if it didn't take a small ice age for them to gather. A quick response team they are not. Then you have to send them into battle, but they spawn at the furthest point from where you want them to be and you can't place a marker at the right position. Frustration sets in and even a spot of Anthrax can't ease your pain.

However, once you ‘learn' the battle pattern, it's just a question of spawning the right kind of troops i.e. the invisible roadies, sending them in to tackle the mission objective and it's all good. Too bad that this is the core game, when I got the most fun out of everything but these major battles.

Pootling around in the Deuce, Eddie's hotrod, is the best way to get around, but I liked getting out and about on foot. This is where you find the real nooks and crannies of the world, gathering new powers and points to spend on weapons and upgrades. There is amusement to be found meeting people, ganging up and forming ambushes, racing cars and even running over deer. If this area of the game had more to it, Brutal Legend would have been more satisfying.

It should have rocked. But in reality, it's a bit middle of the road.

Todd: I can't believe this made you laugh, but School of Rock and Hi Fidelity didn't. That's just wrong!