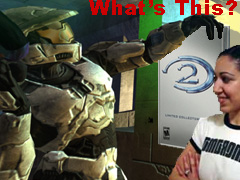 Well, not much has happened since I last spoke to you dear playmates. One thing happened, but there wasn't much else on the radar. Of course that one thing just so happened to be the launch of Halo 2!! So maybe other stuff did happen, but I'm darned if I noticed it. Excitement doesn't cover the gamut of emotions that ran through me last week, in eager, childlike anticipation. And now it all seems like a lifetime ago. I even had to check if it was just last week. Can anything stand up to that kind of hype and anticipation I wonder?

Last Tuesday my little email dingy thing, dinged with a message from Play.com. For once this wasn't going to be a bit of direct marketing about their great Christmas deals, it was actually going to be something I wanted to read. I eagerly opened the email and there it said it plain and simple: ‘Your copy of Halo 2 has been dispatched from our warehouse…" Who cares what the rest said – whoo hoo!

I had to text a friend to tell him the good news. He was pleased for me – or at least he made out like he was and we waxed lyrical about the pleasures that awaited us.

My only concern was that the Royal Mail would let me down. I didn't mind so much when it was briefs and various reports to help me write boring brochures and press releases. A spate of lost mail had blighted me and my concerns were very real.

On the morning of launch day, I rushed to the doormat to see if any game shaped parcels had plopped through the door – but no. The demise of the Royal Mail means that the mail man can turn up at anywhere between 8am and 2pm, making it a very inexact science and the extent of my wait indeterminable.

Fortunately, work decided to distract me with work type stuff and 10am swung round – the usual time for my mail man to turn up. I crossed my fingers hard, snuck a peak through the glass and sure enough there was a postie shaped person shuffling envelopes. Please let one of them be the one, I whispered.

A knock, there was a knock at the door – yess! And sure enough, it was the postie with my padded envelope from Play.com. I signed for the parcel with shaky hands and rushed inside, tossing the rest of the mail aside. Hmmm….a satisfyingly heavy package. And much like a kid on Christmas Day, I set to getting inside the envelope.

The next moment was a revelation on so many levels. Not only did I have a copy of Halo 2 in my hands, but I also had an example of some of the finest packaging ever seen. You'll have to excuse my momentary tangent here, but despite what some may say about the game being the only thing that matters…blah, blah – there's nothing like a bit of nice packaging to suck me in. And this packaging was what I can only describe as a revolution – this will hopefully change the face of DVD special editions. But I digress…

Once an adequate inspection of the wonder that is the packaging was over – I went and washed the dishes. Then I washed the bathroom and did some hoovering – or vacuuming, to you yanks.

I kid you not! I spent the next two hours answering emails and doing the housework. Halo 2 was sitting right there, in front of the television, but something was compelling me to find other things to do. I was like a headless chicken. I thought – well, I'd better eat something before I play otherwise I won't get food for hours. And I'll just do some tidying…

I was like some kind of demented pregnant hamster who'd gone into nesting mode. Short of tearing up newspapers and bundling them in a corner of the room, I was actually preparing myself for the life-changing events that were about to take place. It was partly the fact that I knew the next eight hours would pass like minutes and I'd have to nourish my body for the day. And partly the fact that I wanted no distractions and chores looming over my head, preventing me from committing to the job in hand.

Maybe I was one of those people that just got swept up in the moment. Yay, let's go lay flowers to commemorate the death of Princess Diana, who meant nothing to me prior to this moment. Yay, let's queue for 14 hours to be the first one to buy the next version of Windows just so I know my life has meaning. Or maybe not.

Anyway, I played it. Did it confirm all my worst fears? You'll know soon enough…