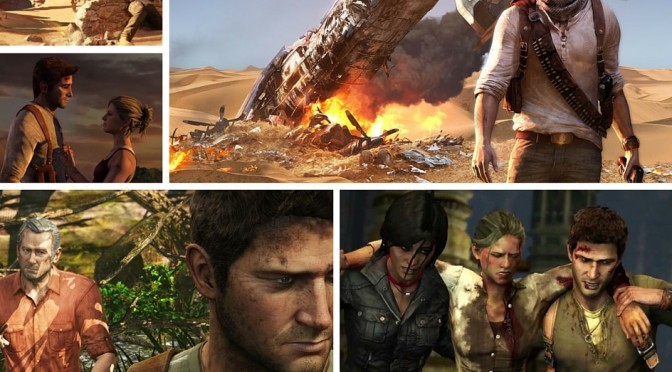 Until I got The Nathan Drake Collection for Christmas, I’d never played an Uncharted game, ever. The first game out when I didn’t own a PlayStation and then I never bothered to pick it up because I thought it was just Tomb Raider with a man. Then the Uncharted 4 trailer looked so good and I wondered if I should get on the Nathan Drake train, but with only three months (before Uncharted 4’s release date slipped back to May) would I have time? Thankfully, my friend made an executive decision and bought the collection for me, as a gift. And I am so glad she did.

Over Christmas I had a clear schedule, which involved me binge-playing Uncharted for about three days straight. It was bliss. And the games are so compelling that I just couldn’t stop myself. These games are so cinematic and pacey that it’s like playing a blockbuster movie. They are just easy, fun and slick, which is everything I want from a AAA experience.

From the opening scene with Drake and Elena, I knew I was going to like that guy. Drake is the quintessential wise-cracking, loveable rogue. Blessed with blistering dialogue and an amazing performance from Nolan North (Nathan Drake), whose comic timing is just perfect, even on the little incidental lines. But the same care and attention goes on all the characters.

I rattled through Uncharted: Drake’s Fortune in a few, exhilarating days, watched the credits roll, bit my lip and thought, I’ll just have a look at the opening of Uncharted 2: Among Thieves. Like my naive assumption that I could watch just one episode of Breaking Bad at a time, Uncharted proved too addictive to walk away from and I was drawn into the game. The characters are too warm, too charming and the adventures are just too well-paced, moving from one amazing set-piece to another.

Considering Drake’s Fortune was released in 2007, this remastered version isn’t looking too shabby at all. By the time we get to Drake’s Deception it’s a pretty gorgeous romp around the world, with some truly breathtaking levels.

Of the three games, Drake’s Deception is my favourite by miles. Although each game is a standalone, you should really play all of them to benefit from the full, emotional punch Naughty Dog delivers in the third game. By this time, I was fully invested, so when the Elena and Drake moment comes it’s a real tear-jerker. And when they hit all the Nate and Sully relationship beats, you’re with them every step of the way.

Uncharted is effectively an homage to Indiana Jones and all the boys’ own adventure type figures that came before. Just like Indy and Lara Croft, Drake is a treasure hunter with an iconic style – namely jeans, boots, and the front-tucked Henley t-shirt. He’s also become the blueprint for every stubbly white guy game hero since, but I can’t blame him for that, because he’s worth emulating.

Under the brilliant direction of Amy Hennig, Drake is more than just a detached figurehead. Drake goes through the wringer. He gets hurt when he falls, he limps and winces and swears when things don’t go his way. He’s as much an every person as a globe-trotting treasure hunter can be. The most crucial thing about Drake is the relationships he has with the people around him.

The Uncharteed series is a story-driven adventure that delivers a cast of characters who feel believable. Sometimes they urge Drake not to try and save the world or berate him for his doggedness. They bicker and laugh and take you along with them for the ride.

By Uncharted 3: Drake’s Deception, the winning formula has been perfected. Sure, it hits some of the beats we’ve already seen in 1 and 2, but it also expands on them and makes them bigger and better. Yes, there’s a lost city that must be found before the bad guys and there’s another vehicle chase and a bit sort of like the train wreck escape from Among Thieves. But there’s also an awesome plane crash, a sunken cruise ship and the fantastic pirate ship graveyard.

If the amazing set pieces and level design wasn’t enough, we also get character driven narrative. Drake is lost in the desert, in the middle of a story that takes us to the beginning of his story. Old relationships are tested and questioned and we even begin to question Drake’s whole identity with one, apparently, throwaway line.

Uncharted has just added itself to my top gaming series of all time and I can’t wait for A Thief’s End to hit. It’ll be a bitter sweet moment for me because I’ve only just discovered Nathan Drake, but then I’ll have to bid him farewell, as Uncharted 4 is his swansong.

Amy Hennig is no longer with Naughty Dog,  which is cause for concern, although the team she worked with have taken the helm. I just hope Uncharted 4 delivers a fitting end to a superb series. This is Naughty Dog, so I’m expecting it to be emotional and filmic and sweeping. If you haven’t already, play the Uncharted series, it really is as good as everyone says.

For an Uncharted vs Tomb Raider, look out for an upcoming episode of Argue the Toss, when Drew and I will be comparing the two series.