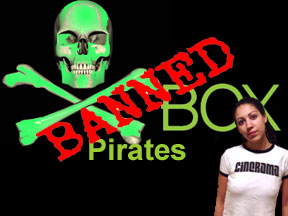 If you felt like a million voices cried out in terror and were suddenly silenced, no it wasn't the population of a nearby planet, it was Xbox Live subscribers who woke up one morning to find that they'd been banned. Yes, this was the week that Call of Duty: Modern Warfare 2 built and apart from record sales, it also prompted Microsoft to come down hard on piracy.

Many gamers had a rude awakening this week. Microsoft banned up to one million 360 owners, with modded machines, from Xbox Live. Apparently the ban is part of an annual sweep that Microsoft carries out each November. It must be more than simple coincidence that it happened on the dawn of the most anticipated game of the year.

All those people with their ripped copies of MW2 have been left weeping into their joy pads at the injustice of it all. As long as there have been games, there has been piracy. But having a chipped machine doesn't necessarily make you a player of pirate games.

I've owned several chipped machines, from the Gamecube through to the Dreamcast and my Xbox, but I've never played a pirate game. If you've listened to our podcast on the state of Japanese gaming you'll know I chipped my machine in order to play grey imports. Region coding is the bane of my existence and I don't mind paying for a game, but I want to be able to play whatever I bloody well want to, regardless of whether some schlep in a suit thinks it'll work in the European market.

Since the launch of the 360 though, my chipping days are over. Once I found out that modded machines wouldn't be able to access XBL it was time to admit defeat. As luck would have it, many publishers decided to do away with region locking, but it never seems to be the case for the games I want to play. I guess that's just the way the cookie crumbles.

Suffice to say, Microsoft is hitting pirate gamers where it hurts. Cutting off access to Xbox Live is going to be a major deterrent for many gamers. Chipped machines used to be ten-a-penny, but I don't know anyone who's gone down this route this time around. With MW2 hitting 1.23 million day one sales in the UK (smashing the GTA record) and COD mania sweeping the nation, chipping that machine must be feeling like a really bad decision right about now.

The Entertainment and Leisure Software Publishers' Association (ELSPA) in the UK told the Guardian newspaper that illegal copying of games and other criminal activities accounts for industry losses of more than Â£750 million each year. Piracy isn't just about getting the latest game for free, it's about organised crime and money laundering. It's an underground industry that is usually part of a highly sophisticated chain of criminal activity.

The way I see it is this, if you enjoy playing games and have any respect for the people developing them, cough up the cash. One of the negative side-effects of the Internet is people expect everything for free – movies, games, music. Of course the games industry has always managed to exist alongside the pirates. This month, maybe they'll all have to invest in chipped PS3s instead and make do with the below par online experience there.

A ban of a mere one million gamers worldwide is hardly going to solve the piracy issue, but it's a small victory for all the punters who forked out Â£55 for their legitimate copy of MW2. Heh, hem, apart from those of us who managed to snag one at a local supermarket for Â£26 – that's not piracy, that's just good, old-fashioned common sense.