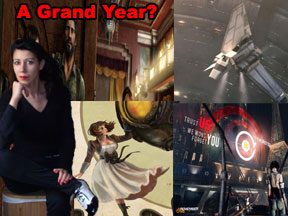 The year 2013 promises to be one that delivers concrete news of the next generation of consoles, but there’s still a lot to love about the current gen. We’ve got a lot of hot titles heading our way over the next 12 months, so don’t waste too much energy yearning for neXtbox and PS4. I’ve picked out a few of my top titles for the year ahead, so get your diary out and start saving your pennies.

Set on a floating city, our protagonist is a hired gun who has to find the mysterious, kidnapped woman with magical powers. Together they have to escape a city being destroyed by some sort of civil war. With Ken Levine in charge of development, this looks set to deliver a rich narrative and deep gameplay. What more could we ask?

No 2013 most anticipated list would be complete without the latest from Rockstar’s hit series. In fact, this probably going to be the launch of the year, so take note. GTAV takes us back to the west coast in an openworld, fictional LA. This time we have three protagonists to play with, so I’m looking forward to a complex and compelling, character driven narrative with the action set pieces that Rockstar is so good at.

It’s reboot time for Tomb Raider, as Crystal Dynamics gives us Lara’s origin story. This Lara is vulnerable and inexperienced, but through the game we get to see her become the tough cookie we know and love. Development has had its fair share of controversy; namely the alleged Lara rape scene, so we’ll get to lay that one to rest. I’m hoping they’ve taken the best of the original games and added a new depth to Lara that will set us up for some new adventures.

This supernatural thriller features a mysterious female lead, played by Ellen Page, who has a psychic connection to another entity. That’s about all we know, so far. The E3 trailer was gorgeous and the game comes from Quantic Dreams, the developer behind Heavy Rain, so expect a focus on narrative. And we all know how much I like that. This PS3 exclusive means extra points to Sony in 2013.

This is another PS3 exclusive that tops the list of games to watch this year. Naughty Dog’s post-apocalytpic survival title takes inspiration from The Road, which means it should be bleak and heart-wrenching. And because it’s from the devs behind Unchartered, I’m expecting cinematic action and believable characters. This is one of my must buys of 2013.

New IP from Ubisoft is nothing to be sniffed at and the Watch Dogs trailer wowed everyone at E3 2012. Aiden Pierce is a hacker in a future Chicago that’s run by Artificial Intelligence. Our protagonist is on the run from an evil media mogul, in an openworld cyber-action game that allows us to access digital information on NPCs, as well as the ability to control traffic light sequences. This means all manner of mayhem is at our fingertips, in what looks like a fresh take on openworld gaming.

Now here’s something you don’t see every day ‘ a black, female lead in a game. But that’s just what Capcom is dishing up in Remember Me. Judging by the stylish trailer, the game looks like Blade Runner meets Perfect Dark. Once again, we play as a fugitive in a cyberpunk world, but the emphasis here is on augmented combat powers in a more traditional third person action adventure.

Can Bethesda knock World of Warcraft off the MMO throne with the launch of The Elder Scrolls Online? Oblivion always felt like an MMO to me, so this is a natural progression for the game. Although I didn’t get on with Skyrim, there’s a lot that I loved about Oblivion, so I’m keen to check this out. Let’s hope Bethesda can bring something new to the MMO table.

With no launch date or platform announced yet, this could be a next gen launch title. Footage released at E3 2012 looked jaw-droppingly gorgeous, which also supports the next gen theory. What we do know is that 1313 is a gritty, grown-up Star Wars. We play a bounty hunter, set in the seedy underbelly of Coruscant in a third-person action shooter. This could be the Star Wars game we’re looking for.

Ni No Kuni: Wrath of the White WitchJanuary 25 (PS3)

Level-5, the developer behind Dragon Quest, has teamed up with Japanese animation gods, Studio Ghibli to dish up a beautiful, whimsical RPG. That should be all you need to know. Where Ghibli leads, it’s usually best to follow.

This game may win prizes for the most nonsensical title ever (and that’s saying something), but Revengeance is worthy of note because it marks a new direction for the Metal Gear series. No more hiding in boxes ‘ hoorah, I say. This time it’s all about cyborg Raiden and kick-ass action and melee combat. It looks gorgeous and I’m hoping it’s less up its own rectum than the usual MGS offerings.

Who’d have thought a Metal Gear game would be in my most anticipated list? And on that bombshell, I shall leave you, dear play chums.