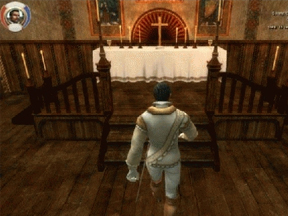 Age of Pirates 2: City Of Abandoned Ships promises high adventure, maritime fun and the life of a pirate on the Spanish Main. Too bad it doesn’t keep its word on any of that.

As movie sequels go, Pirates of the Caribbean is not too bad. I played it on the PC and despite little flaws, managed to have a pretty good time. My review will be based solely on my PC experience. However, I want to put up front that the Xbox version of the game is nowhere near as good. It was pretty buggy, with disappearing quests and crashes during FMV sequences. In fact, our Xbox review console broke while playing the game. We won’t blame Pirates for this, but the combination of an old Xbox and a disc-intensive game was apparently … END_OF_DOCUMENT_TOKEN_TO_BE_REPLACED

Ahoy mates – we close with the enemy – bring all guns to bear! Prepare to engage! Covering the period from the Seven Year’s War through the Napoleonic Era, Age of Sail II brings to you the heart of the Age of Sail. You can do battle as the British High Seas Commander against those upstart Americans in 1776 or fight for the Americans against the Imperialistic British in the War of 1812. You can play from the decks of a Ship of War or the decks of a Privateer just out for the booty. The choice is yours. My … END_OF_DOCUMENT_TOKEN_TO_BE_REPLACED