The Spanish police said on Friday that they had apprehended three men suspected of computer hacking in connection with recent attacks on Sony’s PlayStation Network as well as corporate and government Web sites around the world. The National Police identified the three as the local leadership of the shadowy international network of computer hackers known as Anonymous, which has claimed responsibility for a wide variety of attacks. Anonymous is composed of people from various countries organized into cells that share common goals, the police said, with activists operating anonymously in a coordinated fashion. One of the three suspects, a 31-year-old … END_OF_DOCUMENT_TOKEN_TO_BE_REPLACED

Sony made E3 news by unveiling their new portable gaming platform, called the PlayStation Vita and code-named the NGP. As Hayley Tsukayama reported:Sony unveiled the PlayStation Vita, code-named the NGP, at the E3 conference Monday night. The new handheld, which sports a 5-inch multitouch screen, a rear touch pad and two analog sticks, in addition to the normal PlayStation controls. On Tuesday, Sony posted a few more details about the device in an FAQ on its Web site. Each answer Sony gave about the PS Vita stirs up more questions, but here is some information. The PS Vita will cost … END_OF_DOCUMENT_TOKEN_TO_BE_REPLACED

You know, I haven’t been impressed with Nintendo in, well, just about ages. I much preferred playing Golden Axe on the Sega Genesis than Mario on the NES. True, that was many, many years ago – but some things never change. For example, I have long suspected Nintendo excels in little else but marketing, as the corporation seems to have an uncanny knack of convincing people they absolutely must buy a subpar system and play mindless games until their eyes are red from sleep deprivation. Admittedly, I probably do sound like an aging curmudgeon, but I always believed the color … END_OF_DOCUMENT_TOKEN_TO_BE_REPLACED

Live television and another chapter of the "Halo" game are landing on Xbox 360. Microsoft Corp. announced its plan for the video game console on Monday at a news conference kicking off the Electronic Entertainment Expo, the industry’s annual convention. The company said live TV would be offered by domestic and international broadcasters, but no other details were revealed. Partnerships with international broadcasters currently bring live TV to Xbox 360 in the United Kingdom, Australia and France, but the service unveiled Monday would be the first such offering available on a gaming console in the United States. Xbox 360 and … END_OF_DOCUMENT_TOKEN_TO_BE_REPLACED

Starting May 22, students who spend more than $699 on a Windows 7 PC will get a Xbox 360 4GB console. You can buy any kind of PC, though Microsoft recommended the Dell Inspiron 14r or the Samsung Series 9. You’ll need a .edu email address to buy online; if you want to purchsae in person, bring a student ID. Microsoft said the deal will run until September 3 or until supplies last. "While a Windows 7 PC is perfect for staying connected to your social networks, surfing the web, gaming and streaming videos, music and more, when you add … END_OF_DOCUMENT_TOKEN_TO_BE_REPLACED

Sony plans to bring its PlayStation Store online on Tuesday, May 24, according to a report published on Thursday. Gamasutra said it had obtained a memo that Jack Osomo, PSN content manager for Sony, wrote to its developer partners. In the memo, Osomo revealed that the PlayStation Store, which houses the company’s demos, its downloadable content packs, and its video rental services – should be online by May 24, barring unforeseen difficulties. For publishers, that means that they will be able to push out content that had been delayed by the PlayStation Network outage, which is in a phased process … END_OF_DOCUMENT_TOKEN_TO_BE_REPLACED

Microsoft is sending out thousands of free Xbox 360s to replace boxes suffering from software glitch — even though most users probably didn’t even notice the problem. Gamer Avery Penn posted on Reddit yesterday that he got a surprise email from Xbox Customer Support notifying him that he could get a new Xbox 250GB model along with a free one-year subscription to Xbox Live. The email said that a software update was preventing some Xboxes from reading some game discs. Penn hadn’t noticed the glitch at all, and thought it the email might be a scam. So he contacted Xbox … END_OF_DOCUMENT_TOKEN_TO_BE_REPLACED 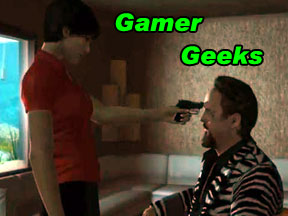 This week Kelly "convinces" Todd how great Heavy Rain is despite his objections, and they both try new things as the former 360-only gamers move into the world of the PS3.

Amazon.com Inc. (AMZN)’s Web Services cloud- computing unit was used by hackers in last month’s attack against Sony Corp. (6758)’s online entertainment systems, according to a person with knowledge of the matter. Hackers using an alias signed up to rent a server through Amazon’s EC2 service and launched the attack from there, said the person, who requested anonymity because the information is confidential. The account has been shut down, the person said. The development sheds light on how hackers used the so- called cloud to carry out the second-biggest online theft of personal information to date. The incursion, which compromised … END_OF_DOCUMENT_TOKEN_TO_BE_REPLACED 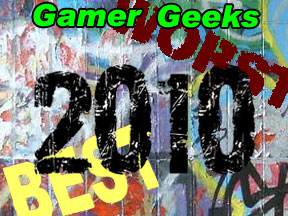 The Gamer Geeks reveal their picks for the best and worst games of the year. And wow, are there some doozies in both categories this year. Get your flamers ready!